Avatar: The Way of Water Review

Bigger, But Not Necessarily Better 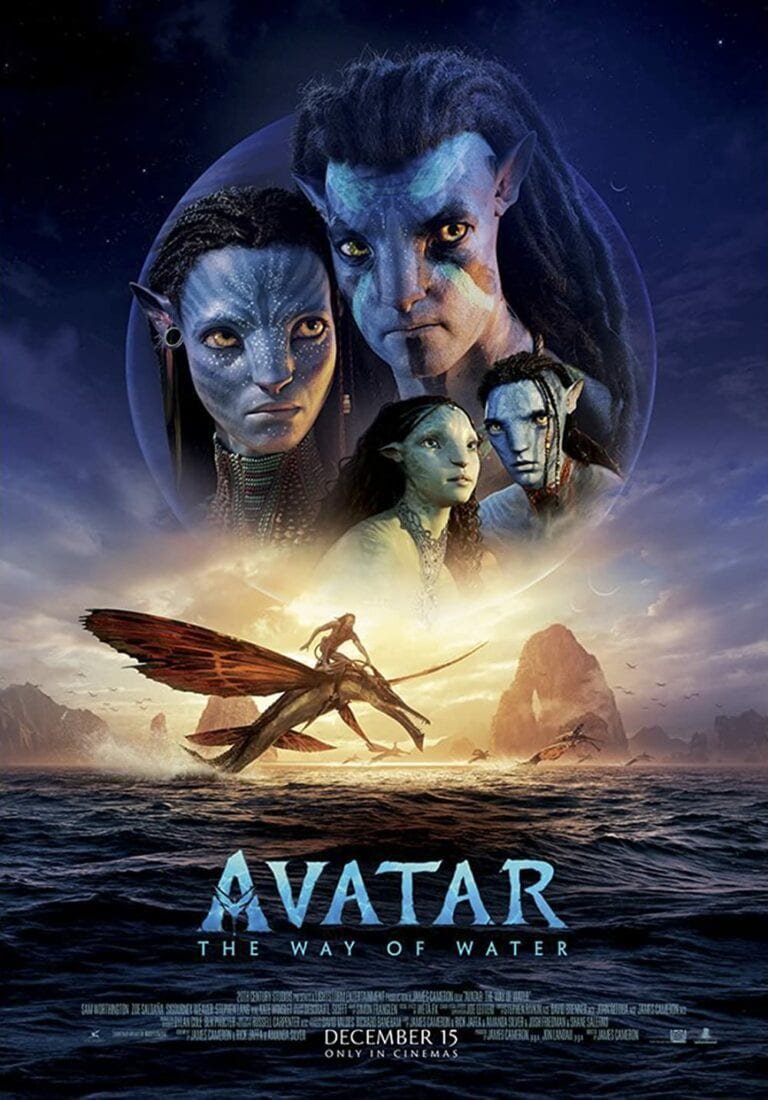 All hail James Cameron, because he has returned, and he’s back in the water with Avatar: The Way of the Water.

Given the title and general marketing, it spoils nothing to reveal that Jake (Sam Worthington) and Neytiri (Zoe Saldana) are in a radical new environment in Avatar: The Way of Water. James Cameron is ready to fully exploit his experiences, since he’s never been a filmmaker to use 3D as a casual whim.

Yes, expect eye-popping visuals galore, because the animation is so lifelike that the Na’vi feel every bit as alive and present as the humans, with Cameron gleefully making use of new toys and a three hour runtime to bring the planet Pandora to life. As the first of many sequels begins, Jake is fully assimilated and settled down with Neytiri and their children, along with less traditional additions to the household: Kiri, the Na’vi daughter of and spitting image of (and voiced by) Sigourney Weaver’s Dr. Grace Augustine.

Her conception is one of the movie’s great mysteries, but for all the mysteriousness of Kiri’s arc, it’s daddy issues that rule the day when the Sky People, or those pesky humans, return packing more heat than ever. Their vendetta against Jake is still strong, and he finds himself in a precarious balancing act—leading the resistance while struggling to be the good patriarch to his children, or more accurately, his two eldest sons.

That’s not to say humans don’t have their own obstacles to contend with. One frequent visitor to Jake and Neytiri’s harmonious family life is the teenage Spider (Jack Champion), who has his own issues. Born and raised on Pandora and having known more Na’vi than humans, he has to face his heritage as the son of Colonel Miles Quaritch (Stephen Lang) after his species returns to tear it up.

That’s in the most literal sense, with burning and forest destruction beginning directly upon arrival. It’s one of the movie’s many hypocrisies, to criticize technology in one of the most stunningly effects-driven films in a market long since accustomed to the latest superhero antics. There was a time when a series like Star Trek could build their messaging on the wondrous benefits of tech to mankind and beyond, but that’s a tough sell in the age of Elon Musk and Mark Zuckerberg.

Clearly we have a long way to go, and in the meantime, the arrogance (not to mention cognitive dissonance) of man knows no bounds in Avatar: The Way of the Water. A franchise that bases its foundation upon a benevolent Indigenous culture to be commodified for audience pleasures is one thing, but to believe that they can literally harness intelligent creatures who would actually be willing to do our bidding is quite another.

“But we love to individually and collectively think of ourselves as the good ones, and Avatar: The Way of the Water is masterful at converting this desperate belief into cold hard cash.”

But we love to individually and collectively think of ourselves as the good ones, and Avatar: The Way of the Water is masterful at converting this desperate belief into cold hard cash. This time around, there’s a deeper emotional heart to the same old messages about family and identity.

Jake and Neytiri are parents of four as Avatar: The Way of Water begins, and keeping children safe is about as easy as telling James Cameron to reign it in when you have teenage sons eager to defend their home while remaining childlike in their (un)awareness of the reality of war. When their brood barely escapes capture and death, they make a painful decision to leave the forest and retreat to the water in hopes of greater safety.

There’s a greater benefit to moving the action to an ocean blessed with coral reefs; no talk of that damn unobtainium. Instead, we have whale-like creatures butchered for their precious abilities to stop human aging, a prize which is a far greater temptation and motivator than any embarrassingly named resource.

The underwater world is also absolutely glorious, with stunning creatures, lavish displays, and jaw-dropping motion capture that is almost worth over a decade’s wait for technology to catch up with Cameron’s ambitions. Never mind that Cameron is basically giving us a glorified miniseries with no fewer than three other sequels planned, and that some of the subplots beg for a multi-episode arc.

The young Champion could fully carry it, being in full standout mode as a human who identifies more as Na’vi. He somehow pulls off more than the role, looking dignified and natural running around in paint and a loincloth as he chews scenery and somehow makes friendship with digital creations almost natural.

If anyone could get audiences flocking back to theatres after some truly dismal returns, it would be Cameron. Get out of the house and commit to the 3D glasses, because Avatar: The Way of the Water is a theatrical experience you won’t forget.

James Cameron brings the next entry in his latest blockbuster, Avatar: The Way of the Water, to breathtaking, albeit flawed, life.
REVIEW SCORE
7
File Under: Avatar, James Cameron