Guardians Of The Galaxy (2014) Review 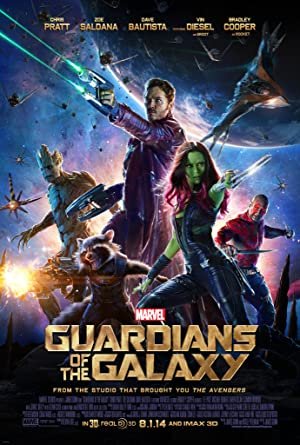 Marvel Studios has been busy making billions of dollars out of their B-line of classic heroes over the last six years and their track record has been consistent enough to qualify as historic. Their latest effort is, at least theoretically, their biggest risk to date. The comic series Guardians Of The Galaxy has been around off and on in various forms since the 60s, but was always more of a niche title amongst the niche of Marvel fans. For the most part, general audiences might not have known much about Iron Man or Thor’s backstories before their blockbusters came along, but at least their names and costumes were iconic enough that everyone recognized them.

These rag-tag collections of space-adventuring outcasts on the other hand aren’t even well known by comic book fans, beyond being dismissed as “that book with the talking raccoon,” which isn’t exactly high praise. Yet, pretty much from the moment the film kicks off, it’s clear this project wasn’t such a big risk after all. The film is a goofy and action packed space adventure that will feel instantly familiar to anyone who grew up amidst a swell of Star Wars knock offs in the 70s and 80s. It’s like watching a sci-fi adventure about a space ship full of various Han Solos and Chewbaccas and just as gloriously entertaining as that sounds.

After a little tragic backstory prologue set on earth in 1988, we’re thrust into a creepy and barren alien landscape. A lone masked space traveler wanders into frame, starts exploring an ominous, and gorgeously designed rotted out alien temple. It’s filled with details that suggest designers spent weeks figuring out its origin and purpose. It seems like we’re about to watch a dark sci-fi epic. Then the masked character pulls out a Walkman and hits play on “Awesome Mix Vol. 1” so that he can groove to “Come And Get Your Love” while looking for an artifact.

That scene pretty much sums up Guardians Of The Galaxy as a whole. It’s a film that flip-flops between being a genuine action sci-fi epic and a campy piss-take on the genre. That masked hero is Peter Quill aka Starlord aka Chris Pratt, an earthling slacker who was abducted as a child after fleeing from his mother’s cancer bed and now lives in the far reaches of the galaxy where he flies around, steals stuff for profit, and beds lovely alien ladies. The item he’s looking for on the planet is a mysterious orb containing one of the Infinity Gems that the dark lord Thanos (Josh Brolin) seeks to bring pain and torment to the universe. Once Starlord has the orb in his hands, he’s suddenly pursued by the warlord Ronan (Lee Pace), Thanos’ not-so-evil daughter Gamora (Zoe Saldana), a talking raccoon named Rocket (Bradley Cooper), and Rocket’s single-sentence-speaking-walking-tree-sidekick Groot.

A series of mishaps and fight scenes land Starlord, Gamora, Rocket, and Groot in a prison together where they soon meet up with the hilariously literal minded Drax The Destroyer (Dave Bautista). After going through some space jail growing pains, the gang decides to team up to break out of prison and steal back the orb for profit. In the process, this antihero gang of ragamuffins turns into a new team of heroes. They blow stuff up real good, and interact with a variety of eccentric space characters played by eccentric character actors like John C. Reilly, Benicio Del Toro, Michael Rooker, and Glenn Close.

“It’s space fantasy in the Star Wars or Firefly mode, not serious science fiction. It works. It works damn well.”

It might not be a superhero tale, but it sure plays like a Marvel movie. The humor is cranked to eleven, the characters are all delightfully flawed, the action explodes loudly and consistently, the actors are all ideally cast, and most importantly it’s one big giddy sugar rush of entertainment from start to finish. It’s space fantasy in the Star Wars or Firefly mode, not serious science fiction. It works. It works damn well.

The key was bringing in writer/director James Gunn who started at Troma (he even gave Lloyd Kaufman a cameo here!), then moved on to the weirdo cult flicks Slither and Super. Gunn has a very distinct voice. He loves outcasts, he loves to honor genres while gently mocking them, he loves to cast bizarre character actors, and he always finds ways of sneaking a little subversion into pop entertainment. Gunn’s voice fits perfectly into the Marvel movie machine and helps distinguish Guardians Of The Galaxy as a slightly wilder and sillier wing of the Marvel cinematic universe. His cast is wonderful with Chris Pratt adding slacker wit to his sarcastic hero, Saldana nailing her cold-as-ice fighter through layers of green make up, Cooper turning a ludicrous raccoon cartoon into a genuine sci-fi badass, and Diesel repeating his Iron Giant of being a far better actor as a barely articulate vocal performer.

Yet, it’s weirdly WWE star Dave Bautista who steals the movie away as a hilariously numb-skulled muscle man who can’t understand non-literal thinking (ex: “Nothing goes over my head. My reflexes are too fast. I would catch it.”). Around the edges Gunn’s favorite actor Michael Rooker sleazes his way into a highly memorable villain role, Benicio Del Toro delivers easily one of his strangest performances, and John C. Reilly gets his usual laughs doing his thing. It’s a big movie with a lot of moving parts and despite never having worked on a project close to this scale before, Gunn nimbly juggles a massive cast and mixes tones between dark n’ moving and bright n’ funny with ease.

There’s no denying it, Guardians Of The Galaxy is an absolute blast. It’s nearly impossible to watch the movie without a big stupid grin on you. James Gunn was an unexpected but wise addition to the Marvel family who will hopefully be in their directing and writing rotation for years to come. Yet, it has to be said that the movie has faults and most worryingly, they all come from over-familiarity in the Marvel formula. Seeing snarky heroes go through origin stories is starting to get a little dull as is the studio’s tendency to deliver villains that are little more than one note snarls in masks (hopefully Thanos will curb this trend).

Worst of all, after the movie peaks with an astounding team-building prison-break sequence, it’s just a dry run to yet another climax in which giant objects fall from the sky and destroy an innocent city. Now, none of these things derail the movie in a significant way, it’s just a troubling trend to see Marvel movies getting so familiar. I suppose that was inevitable, but it would be a shame for such an inventive studio to start spinning their wheels now. That said, it’s far too early to start the countdown to a Marvel Studios meltdown. With Guardians Of The Galaxy, they just turned a D-List books filled with also-ran characters into one of the most satisfying blockbusters of the summer. Thankfully, there’s still plenty of Marvel mojo left, let’s just hope they’re wise enough to start changing up their winning formula for the sake of variety.

The comic series Guardians Of The Galaxy has been around off and on in various forms since the 60s, but was always more of a niche title amongst the niche of Marvel fans.
REVIEW SCORE
8
File Under: Chris Pratt, Guardians of the Galaxy, Marvel, Vin Diesel