Another Earth brings sci-fi to the big screen in the middle of the summer, yet it couldn’t be more different than the loud, clanging space battles occupying neighboring cinemas. This is science fiction at it’s most intellectual, with the genre used as a springboard for ideas rather than just special effects.

It’s a small movie rooted in characters and emotions, and it offers no definitive conclusion or closure. You’ll come out of the theater with a head full of questions and fodder for endless debates. The summer might not be prime coffee shop season, but this is a movie that demands caffeinated pontification immediately after the credits roll.

Incandescent unknown actress Brit Marling stars as Rhoda, a troubled young girl who was on the road to a promising career when she tragically crashed her car into a family, killing a pregnant mother, and landing in a brief stint in prison. One of the reasons for the crash was that she spotted a second earth in the sky that night; everyone did. Dubbed “Earth 2,” this replica of our planet suddenly appeared in the sky inexplicably. Contact was made and it was determined that the new Earth is an exact replica of our own, including duplicates of everyone on the planet. Disgusted with her life, Rhoda contemplates visiting the second earth while at the same time she tries to reach out to the man (William Mapother) whose wife and child she killed. Scared, she pretends to be a maid and starts cleaning his house for free. Gradually they become friends and then something more, all while that second earth keeps slowly moving towards our own.

More concerned with metaphysics than science, characters don’t really spend much time worrying about the “hows” and “whys” of the second earth’s existence. They’re more concerned with the implications. How similar could Earth 2 be to our own or how different? Could you go to the new planet and meet a completely different version of yourself? What would you say? These are the things that seem to concern everyone in Another Earth as if this strange new planet came into existence purely to put the world into pensive existential crisis. The ideas are intriguing and well handled by first time filmmaker Mike Cahill (who co-wrote with Marling and also shot and edited himself, while creating some of the special effects for good measure). Nothing is ever too in your face. Most of the discussions take place on TVs in the background, with the focus mostly on a small, character driven story flavored by the sci-fi elements.

Cahill’s background is in directing documentaries (frequently working with Marling as co-directors), which is obvious in the intimate handheld camera style in which he films his characters. In Rhoda, he and Marling create a fascinatingly complex character. Her motives are pure, but the way she gets tangled into a relationship with the man whose wife she killed is morally suspect to say the least. She’s a fascinating character who may not always be likable, but she’s always empathetic and Marling proves to be a sensational actress (William Mapother ain’t too bad as the damaged husband either). With that complicated and tricky drama occupying the foreground and the stunningly rendered second earth hanging over everyone’s heads in the background with all of it’s philosophical baggage, you get a pretty challenging movie. It’s entertaining and never feels like a homework assignment, but turning your brain off at any point while watching the film would be a terrible mistake.

Another Earth raises many questions and doesn’t offer any concrete answers. I’m sure many people will inevitably be frustrated by that approach, but everyone else will be thrilled by the endless discussions to be had from the ideas explored. Filmmakers rarely treat a genre like sci-fi this seriously and while the movie isn’t perfect, Mike Cahill and Brit Marling prove to be first-time filmmakers of substance who will hopefully continue to work for quite some time. They started Another Earth without any money, content to create it entirely on their own. Good fortune and perseverance got the film made, and with any luck the fact that it was even released will put them on the path to a strong sophomore effort.

Another Earth brings sci-fi to the big screen in the middle of the summer, yet it couldnâ€™t be more different than the loud, clanging space battles occupying neighboring cinemas. 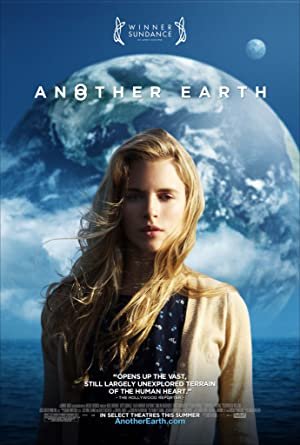