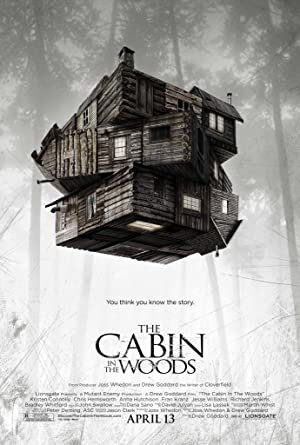 Cabin In The Woods is one of the best horror movies to come along in recent years. It’s an ingenious, self-conscious riff on tired formulas with enough gore n’ jumps to keep the fanbase happy and a subversive streak of humor to elevate the material above the norm. Unfortunately, it’s going to be nearly impossible to discuss without spoilers, so I’m going to warn you about that up front. I have no intention of ruining the ending or anything of the sort. It’s just that this is one of the few movies getting released these days to keep the concept a surprise before hitting screens.

Even discussing the first scene will spoil the general idea of the film. So if you want to go in fresh without any preconceived notions about what you’ll be getting yourself into, my advice is to stop reading and run to the theater to see the flick. However, if you want to know why you should be so excited about a new horror movie about a bunch of college students heading to a rural cabin to get chopped up into bits, then read on. You’ll get everything you want from that stock horror concept and a whole lotta extra smartypants comedy/genre commentary you’ll never expect.

Ok, so yes the protagonists in this movie are a bunch of college folks going to a cabin for the weekend, each fitting into a certain personality type. We get the jock (a pre-Thor Chris Hemsworth), the slut (Anna Hutchison, who I’m sure doesn’t deserve that label in real life), the stoner (Fran Kranz, serving up oodles of comic relief when the shit his the fan), and the prude (the lovely Kristen Connolly). However, from the opening moments they aren’t just being watched by the audience, but also by a pair of mysterious, wise-cracking, pencil-pushing government types played by Richard Jenkins and Bradley Whitford (who are absolutely hilarious throughout and nearly steal the movie away from the scares). They seem to know everything about the characters and are clearly responsible for whatever is about to happen in the cabin. When the pretty young things make their way into the seller and find a bunch of mysterious artifacts, Jenkins and Whitford start taking bets on which one they’ll choose and which horror will be unleashed (ranging from zombies to ghosts, slasher killers, and the ever-rare mermen). As the supernatural shenanigans unfold in the cabin, director Drew Goddard keeps cutting back to this strange office where the employees crack jokes about the horror clichés as they unfold, while also looking in on similar projects going on around the world (like a bunch of Japanese schools girls facing very familiar stringy-haired ghosts).

Not quite what you thought the movie would be, right? Well, things only get weirder from there, but I don’t want to ruin anything else. This meta-movie concept comes from co-writere Joss Whedon (he of Buffy The Vampire fame) and former Buffy staffer Drew Goddard, who also directs and wrote Cloverfield a few years back. These are guys who clearly love horror movies and created this upstairs/downstairs conceit as a strange genre commentary about the relationship between horror movies and their audience. The cabin story itself delivers the standard genre tropes that everyone will plunk down their ticket money for, with the office somehow controlling it all providing pointed insights into why filmmakers and audiences are endlessly tickled by this tired material. Though often a comedy first, Goddard and Whedon deliver plenty of gore and through their bizarro concept sneak in a few legitimate scares as well, since so many conventions are subverted for surprise. Like the first Scream, it’s a movie that has its cake and eats it too. The self-conscious mockery acknowledges all the problems with similar horror movies, while still presenting the actual horror threats straight enough to create some legitimate chills. Getting that tonal balancing act right is not easy as it seems when executed this well and is almost more difficult to pull off than a successful horror movie.

Cabin In The Woods was shot several years ago before getting stuck in limbo when MGM collapsed. It has acquired a near mythic status amongst anxiously awaiting horror fans and the good news is that the movie delivers on the hype with a smart concept and an epic monster-mash climax that should have the Fangoria crowd foaming at the mouth. Now, it’s not a masterpiece. The whole movie builds to an almost mythical conclusion that perhaps stretches the elastic meta-movie logic a little too far. However, that material thankfully doesn’t kill the film, it just leads to a bit of a limp across the finish line rather than a triumphant victory lap. Whedon’s status as a Comic-Con god was cemented long ago, so Cabin In The Woods will be but a blip in his legacy (let’s not forget that in a few short weeks his take on The Avengers will premiere). However, for Drew Goddard, it’s an undeniably impressive directorial debut that will helpfully lead into a long, successful career. The guy clearly has movie-geek passion and brains to spare. We need more intelligent genre movies like this coming out of Hollywood and hopefully Goddard will get a chance to repeat the trick very soon.

Whedonâ€™s status as a Comic-Con god was cemented long ago, so Cabin In The Woods will be but a blip in his legacy.
REVIEW SCORE
8
File Under: