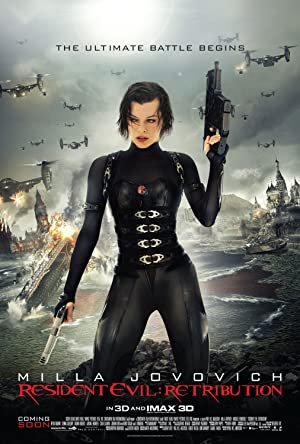 Now five films into the franchise, the latest Resident Evil might be the best film of the series so far. Of course it’s all pretty silly, convoluted, and gloriously, gratuitously violent.

Watching Resident Evil: Retribution is almost like peering over the shoulder of someone playing the latest game. The plot has been stripped down to ensure as little amount of screen time between action sequences as possible and those blood filled zombie/mutant fights feel like levels in a videogame. There’s nothing here that hasn’t been done in the zombie genre before and much that is even repeated from previous RE flicks. But, on a level of pure blood n’ guts horror/action fun just in time for Halloween, you could do a hell of a lot worse.

The film opens with no less than ten minutes trying to bring the audience up to speed on the never-ending series written on the fly. Essentially, it can all be boiled down to this. After Milla Jovovich and her chums broke into the Umbrella corporation and were hunted by the zombie-loving supercomputer, a zombie apocalypse was unleashed onto the world. Milla is one of humanity’s last survivors and thanks to her skill with a machine gun and a well-timed jump kick, that isn’t changing any time soon. As the series went on a few other characters from the games were added into the mix, like the ominously powerful Wesker (Shawn Roberts) and the zombie hunting partner turned Umbrella controlled villain Jill Valentine (Sienna Guillory). Then after a slow-mo and backwards ship-set zombie shoot out, the latest chapter finally begins.

Director Paul WS Anderson (Mortal Kombat, Resident Evil, obviously, Event Horizon) is a man who never wants to let himself or the audience be bored for a second, so the blood pours out liberally, even when narrative logic and clarity is sacrificed. In any other series, that could be a problem. In Resident Evil, it actually makes it closer to the source material. Even fans who have followed the series from the ancient days of the PS1 struggle to untangle the narrative mess of the games. Then again,  If these movies weren’t convoluted they wouldn’t be accurate representations and of course much like the games, the story is confusing purely so that more action can be crammed into the running time. With the varied cultural settings to use as a playground, Anderson piles one fantastic zombie shoot ‘em up after another (with entrails and tentacles constantly flying towards the camera in 3D). Maybe it’s not as entertaining to watch that much ultra violence as it is to be in charge of it all with a controller in your hands, but turn your brain off and this can be a blast.

Most of the underwritten characters and idiotic plot devices are silly enough to get campy laughs, ensuring that the entertainment keeps flowing one way or another. Jovovich has a fairly personality-free role to play, but brings enough beauty, charisma, and ass-kickery to deliver the goods. She’s an underrated actress who deserves a franchise, even if it took husband Paul WS Anderson and a videogame series to provide it.  On a certain level the movie feels like a reunion and party of sorts for Anderson/Jovovich. They know how silly this stuff is and they don’t pretend otherwise. It was just a chance to hang out together, slaughter a few hundred zombies and visit with old friends. Set the expectations low enough and you might have almost as fun watching Resident Evil Retribution as everyone involved clearly had making it.

Watching Resident Evil: Retribution is almost like peering over the shoulder of someone playing the latest game.
REVIEW SCORE
6
File Under: Resident Evil