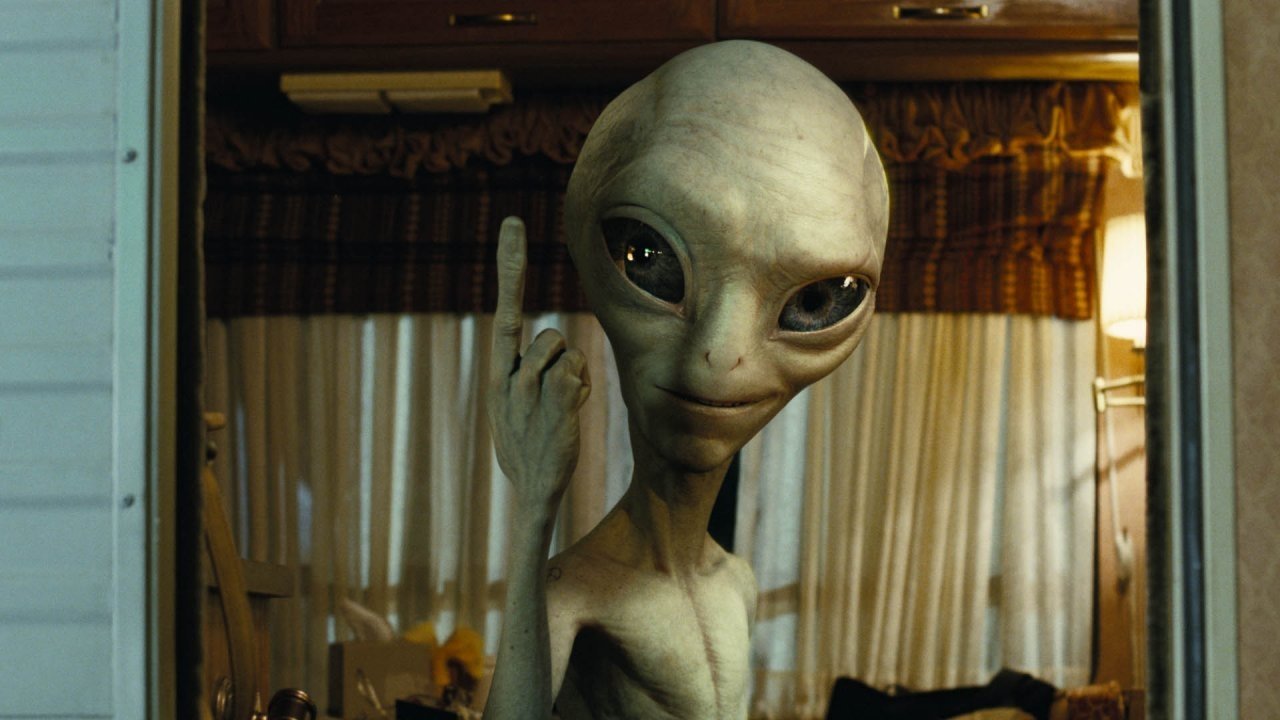 Phil Brown | Mar 17, 2011
Simon Pegg and Nick Frost are two guys who are more than happy to let their geek flags fly. They’ve made a career out of turning life-long pop culture obsessions into comedy, starting with the beloved UK TV series Spaced (about a group of reality-detached 20-somethings whose lives are filtered through their encyclopedic pop culture knowledge) and continuing into film with the rom-zom-com Shaun Of The Dead and self-conscious buddy action comedy Hot Fuzz.
The latter two films are part of a planned “Blood And Ice Cream Trilogy” with Pegg, Frost, and director Edgar Wright (Scott Pilgrim). Paul is not the third entry in that series due to Wright’s absence, but it is an admirable side project sure to please their fans. Though more of a pleasant diversion than an instant cult classic like their previous films, Paul still demands to be seen by lovers of comics, sci-fi, and just movies or comedies in general.

The comedians star as a pair of lifelong buddies and eternal geeks who travel from Britain to American for the road trip of their fanboy dreams. After the aspiring comic book authors stop by Comic-Con, they climb into an RV to visit the US’ top UFO hotspots. Things change when an unexpected accident sees them pick up the wisecracking titular alien voiced by Seth Rogen.

Soon they are joined by a sheltered Christian (played by the endlessly hysterical Kristen Wiig) who abandons her belief system after Paul explains how the universe really works, while also being pursued by a team of FBI agents (Jason Bateman, Bill Hader, Sigourney Weaver, and the always underrated Joe Lo Truglio) anxious to get Paul back in a cage.

The film follows the same basic formula as Shaun and Fuzz, with Pegg and Frost gradually becoming part of the very type of genre movie their characters would love to watch over salty snacks and soft drinks/drugs. In this case, the gentle alien movies of Steven Spielberg take the place of the zombie movies and buddy cop flicks. Though the script is still littered with clever references, it has to be said that this aspect of the film severely suffers from the absence of Edgar Wright. Though Greg Mottola works wonderfully with the actors and handles the effects well, he simply isn’t as versatile a director as Wright. Both Shaun and Fuzz may have primarily been comedies, but Wright had the chops to make them work as legitimate horror and action films as well. Paul’s action scenes are merely functionary and never feel like anything more than a comedy director trying to play with the big boys. When specific shots are lifted from Spielberg movies like Close Encounters as jokes, we get tantalizingly brief glimpses of how the entire movie should have looked. Paul should feel just as exciting and wondrous as a Spielberg movie, but never quite does.

Of course that mild criticism that simply means Paul is merely a very good film instead of a great one. As a Hollywood comedy, it’s still leaps and bounds above the pack in terms of ambition and execution. Writing together for the first time, Pegg and Frost have created a hilarious sci-fi comedy with an admirable reverence for the genre films that came first. The central comic nerds are lovingly created by the writers/actors, gently mocked but never looked down upon. Pegg and Frost are geeks at heart and this film is a love letter to their eternal geekiness, with Comic-Con rendered as an orgasmic nirvana rather than a dungeon of four-eyed rejects. Paul himself is a wonderful creation, an all-knowing creature with healing powers a la ET (in fact it’s revealed that Paul gave a few ideas to a certain bearded director in the film’s finest cameo) and a sarcastic wit. Seth Rogen proves to be an ideal voice for the character since he not only knows his way around a one-liner, but has always oddly sounded like a wise old man despite being in his mid-20s.

Though the natural chemistry between Pegg, Frost, and the CGI Paul would provide enough laughs to carry any film, the filmmakers also stacked the deck with brilliant comedians in supporting roles. Admittedly the humor is a little broader than Pegg and Frost’s previous efforts, but that’s understandable given that the film marks the first time they’ve worked with a large budget and a Hollywood studio. Concessions were clearly made with dick and fart jokes tossed in amidst the smarty-pants cinematic in-jokes and while that might hurt the movie-geek credibility of the project slightly, it does ensure a high quotient of belly laughs to please audience members who haven’t yet been welcomed into the cult of Pegg n’ Frost. The film plays like a cross continental combination of Pegg and Frost’s distinct brand comedy and the smutty/smart improv style of the Judd Apatow clan (of which Rogen, Hader, Wiig, and Superbad director Mottola are all card-carrying members). As a cross-cultural comedic cocktail, it works quite well.

Any complaints that can be laid on Paul stem from the fact that Simon Pegg and Nick Frost set the bar so high with their previous outings. The film bares unfavorable comparison only to their past work and not contemporary mainstream comedy. Sure it might have been nice if Edgar Wright made the movie feel like vintage 80s Spielberg or if Paul himself had been a physical creature created with make-up and animatronics rather than expensively inauthentic CGI, but I probably wouldn’t even think of those problems if the movie was by anyone else. As far as geek-centric comedies go, Paul is an absolute blast and even fans of Pegg and Frost will love it provided that they lower their expectations slightly. In the end, this is merely a side project that will tide us over while Pegg and Wright get to work on the final film of their trilogy. Since Pegg told Comics And Gaming Monthly that the writing process for that has already begun, we thankfully won’t have to wait too long. For now, we can enjoy Paul warts and all. Patience people, the next cult classic is coming and at least this flick tops every other film claiming to be a comedy currently in theaters.

ince Pegg told Comics And Gaming Monthly that the writing process for that has already begun, we thankfully wonâ€™t have to wait too long. For now, we can enjoy Paul warts and all. Patience people, the next cult classic is coming and at least this flick tops every other film claiming to be a comedy currently in theaters. 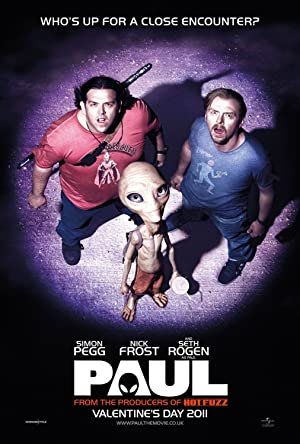