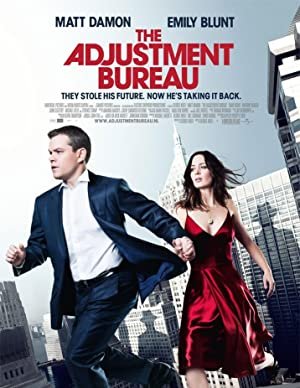 Like all Hollywood adaptations of the writings of Philip K. Dick, The Adjustment Bureau takes one of the influential author’s sci-fi thought experiments and transforms it into a thriller. Fortunately the movie is closer to Blade Runner than Paycheck because the integrity of Dick’s original idea remains intact despite all of the embellishments necessary to transform it into popcorn entertainment. What once was a weird little “what if” short story is now a grand thriller and romance with pretty people in expensive clothing running around glamorous areas of New York and falling in love whenever they aren’t being chased by men in hats. It’s both silly and smart and is pleasingly geared at an adult audience. Sometimes it’s nice just to know that the studios are still making entertainment for people over the age of 16.Dick’s original short story “The Adjustment Team” was about a man who one day inadvertently notices an aspect of his life being changed by a group of bureaucratic enforcers who silently watch over the universe and step in to fix things whenever they aren’t going according to plan. They threaten the man not to tell anyone and he returns to his life knowing that he is unable to fully control what happens. It’s an intriguing way of exploring the finite nature of fate without getting lost in religious rhetoric.

The basic seeds of this story can be found in The Adjustment Bureau, but it’s obviously been expanded. Matt Damon plays a young New York politician headed to the White House who experiences a momentary set back after losing a senate seat. Fortunately he meets a pretty dancer played by Emily Blunt in the bathroom before giving his concession speech, who encourages him to take a risk and be honest on stage, which only serves to further Damon’s career. Years later, he runs into Blunt again, but is quickly found by The Adjustment Bureau and told that he can’t be with her because it isn’t written. Not one to take “no” for an answer, Damon begins fighting for Blunt. He’s aided by a kind agent who feels like Damon deserves a chance to pursue an alternate path, while also chased by a particularly harsh agent (Terence Stamp in of his best villainous performances since General Zod in Superman 2) who wants to erase Damon’s memory.

In lesser hands this film could have watered down Dick’s intriguing concept into an unwatchable love-conquers-all episode of Touched By An Angel. Fortunately, writer/director George Nolfi gets the balance between intellectual sci-fi, action, and romantic fantasy just right. It’s Nolfi’s first film as a director, but scripting duties on the likes of The Bourne Ultimatum have clearly taught him how to mix tense action and high concept ideas well. As a rumination on the nature of fate and free will, The Adjustment Bureau proves to be quite interesting, never devaluing either theory or prescribing to religious dogma. At one point Stamp let’s loose an intriguing theory on Damon suggesting that every time humans were given full free will in the past, they blew it. After the Enlightenment and the Renaissance, humans were briefly allowed to take over the in 20th century, leading to two world wars, the great depression, and the holocaust.

Now their actions are monitored just enough to ensure nothing that too terrible happens (perhaps the adjustment team doesn’t have access to the Middle East?). It’s an intriguing idea worthy of Dick as is the way in which the adjustment team moves, using special doors around New York to travel long distances. Digital trickery allows it to seem like Damon can enter a door on in Yankee Stadium and wind up at the statue of liberty. Moments like this are visually extraordinary, yet simple enough to never feel like a distracting cartoon effect. The fact that the adjustment team wears magic fedoras to open these doors is admittedly a little silly, but it does lend an old timey Hollywood style to the proceedings that is quite welcome.

The love story also ends up being a benefit to the concept rather than a distraction, proving to be a believable means for Damon to want to break free from his fate. Plus, Blunt and Damon are definitely a pretty pair with palpable chemistry. It’s another smart choice of a role for Damon who has a good sense of what movies will allow him to expand as an actor without his movie star status being distraction. Overall, The Adjustment Bureau is a very solid and entertaining thriller with just enough ideas behind it to avoid insulting the audience. It’s not a masterpiece and certainly won’t make much of an impact on the Hollywood thrillers to follow, but finding big budget entertainment actually designed for adults is rare these days. In an ideal world, The Adjustment Bureau would be an average thriller. However, in a time where Sanctum and Gnomeo And Juliet will be playing in neighboring theaters, it almost feels like a minor miracle that this movie was made at all. Hopefully the film and other like it (including the excellent upcoming sci-fi flick Source Code) will be successful enough to encourage a few people in Hollywood to appeal their audience’s intellect occasionally rather than just aiming for their more base instincts. We can’t just watch Nicholas Cage movies all the time.

The basic seeds of this story can be found in The Adjustment Bureau, but itâ€™s obviously been expanded.
REVIEW SCORE
7
File Under: Matt Damon