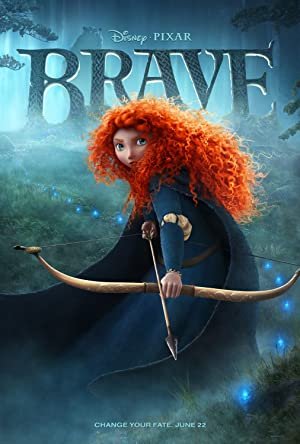 Another summer, another Pixar movie. The only difference is that this time the CGI titan’s latest work faces a little skepticism since it follows up the company’s only genuine failure in Cars 2 and is also one of the first features to come out of the studio following the departure of directors Brad Bird (The Incredibles, Ratatouille) and Andrew Stanton (Finding Nemo, Wall-E) from Pixar’s legendary braintrust of storytellers who work in close collaboration. Well folks, I’m pleased to say that all of those worries are a waste of your time and mine.

It’s like Cars 2 never happened. Pixar has returned to their refreshingly mature brand of family entertainment with another movie equally funny, touching, adventurous, and above all entertaining. It might not scale quite as high as some of the studio’s crowning achievements, but compared to every other CGI family feature factory out there, it’s on another level. They’ve gone and done it again. At this point we may as well assume that isn’t going to stop.

Part of the reason Brave has appeared to be vaguely disappointing is that it’s been marketed like the conventional Disney princess tale that it’s not (yep, thankfully this ain’t Tangled 2: This Time It’s Scottish). It does start off that way with a set up about the Scottish princess Merida (Kelly MacDonald) being groomed for marriage by her complacent mother Elinor (Emma Thompson) and warrior father Fergus (the great Billy Connolly) who lost his leg to a bear many moons ago (yeah, I know, but it’s important). However, that quickly changes when Merida turns of age and the rival clans are invited to participate in a contest to find a suitor for the princess’ hand. The leaders are all fools (hilariously voiced by Scottish-accented A-listers Robbie Coltrane, Kevin McKidd, and Craig Ferguson) and their sons even worse. Merida shows them all up at an archery competition, which inspires rage amongst the men and especially Elinor who can’t understand why her daughter won’t fall in line. Merida runs off seeking help and finds a witch who offers a spell that will change her mother’s mind. Unfortunately that turns her mother into a bear that her father instantly wants to kill (told you that was important) and Merida has only a fleeting few hours to break the spell and set things right.

The story is simple, but the execution wrings more adventure, action, comedy, and genuine emotion out of the material than should be possible. Scenes with Merida trying to connect with her bear mother (who at first awkwardly tries to remain dainty before gradually taking on more primal, animalistic traits) are deeply moving and sweetly funny in that magical Pixar way. The studio has a gift for grounding fantastic worlds with relatable human emotion that is on full display here. Whenever a little action kicks in co-director Mark Andrews shows off his background storyboarding Samurai Jack and Spiderman with thrilling set pieces, yet the movie works best in the small character moments. The voice cast led by MacDonald, Thompson, and Connolly are exquisite, finding souls to their cartoons and never missing a beat of the comedy. As always, the visual design is peerless. Though the world is heightened through rounded, exaggerated characters designs and a few even Miyazaki-esque fantasy creatures, the Scottish landscapes and castles feel more realistic and grand than most live action movies actually shot in the country. The script deceptively simple and very carefully crafted without a moment of screen time wasted as all of the competing subplots and characters barrel towards connection in a very specific and well-realized climax. It’s honestly hard to find fault with the film. Even Merida’s three silent mischievous brothers who initially seem like child audience baiting comedy relief serve a purpose beyond making kiddies giggle.

hough and very rarely is it done this well. Sure, by virtue of the fact it is a slightly more conventional family film than say Wall-E, Brave doesn’t instantly skyrocket to the top of the list of Pixar’s greatest achievements. However, it does sit comfortably with the pack and given the incredible line up of entertainment that they’ve provided over the last 17 years, that’s a pretty damn good accomplishment. The only sad part is that it’ll be another year before we get to see the next Pixar joint and now we have to go back to dreading the weekly CGI animated family blockbuster release again. Ah well, at least one group of animation geniuses know what they’re doing.

Part of the reason Brave has appeared to be vaguely disappointing is that itâ€™s been marketed like the conventional Disney princess tale that itâ€™s not
REVIEW SCORE
8
File Under: