The Dark Day and Night 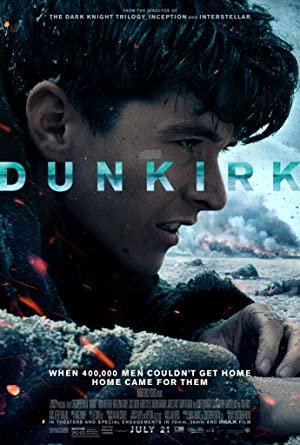 In some ways, Dunkirk represents the culmination of the blockbuster craft that director Christopher Nolan has slowly folded into his chilly and cerebral filmmaking style. From The Dark Knight on, all of Nolan’s blockbusters peak with carefully edited sequences that weave together several climaxes unfolding on several timelines (and occasionally several planes of reality). The technique is intense, breathlessly jumping between climatic set pieces in ways that give viewers little time to breathe as his films operatically swell to a flourish. At a trim 106 minutes, Dunkirk is Nolan’s shortest movie, and that’s because it’s one of his multi-level criss-cross climaxes expanded to feature length. There’s no set up and even less resolution, just one epic war movie that pounds on viewers like a densely orchestrated ride. It’s a remarkable achievement of pure cinema and is sure to be remembered as one of Nolan’s finest directorial achievements.

The film kicks off in the middle of the events of Dunkirk. An almost entirely unseen German army has pushed the Brits to the edge of the English Channel. 400,000 soldiers are now sitting ducks for an enemy that surrounds them on land, sea, and air. The Brits can see England yet can’t reach it, and the waters are too shallow for any of the biggest Brit navy vessels to cross. It’s a pickle. Nolan plays this madness out across three simultaneous storylines. There’s the group on the beach/in the boats—a vast collection of panicked soldiers led by Kenneth Branagh’s stiff upper lip commander unsure of how it’ll all end. There’s a civilian father (Mark Rylance) with two young boys who volunteers to take his boat across the channel in the hopes of saving as many soldiers as possible. Then there are two fighter pilots (Tom Hardy and Jack Lowden) in the air with a bird’s eye view of it all—while shooting down a few bombers and fighters. Nolan breathlessly cuts between the three storylines and dozens of characters. To complicate things, each story has its own timeline that overlaps with the others in unexpected ways to add further depth, perspective, and shocks.

By Nolan standards, Dunkirk has a surprisingly straightforward script. The war epic is stripped down to bare bones to make viewers feel as though they’ve been thrust into the middle of the action to suffer and triumph alongside the characters. There’s no single protagonist and the movie star faces like Cillian Murphy and Tom Hardy get equal screen time with unknowns. All the performances are strong, but none get conventional heroic journeys. Nolan casts famous faces only so that they’ll stick out when characters appear in unexpected spots across timelines. Otherwise, the film is more about the collective experience than anything resembling conventional narrative. It’s all about feeling the story rather than listening to it. Almost like the opening sequence of Saving Private Ryan expanded to feature-length.

Good lord is the film ever visceral and intense. The muted colours, deep focus, and massive scale of the imagery overwhelms and envelops the audience while Hans Zimmer’s never ending score of screeches and rumbles digs into your guts to provide an anxiety-inducing sense of panic. From the first scene to the last, you’re trapped with these men through vicious attacks and impossible moral quandaries. Sweat covers your back and bass rattles your teeth. Nolan shoves characters and viewers into impossibly cramped locations that quickly become death traps. Then he’ll cut to vast spaces just as imposing in their own way. It’s a complete sensory assault that demands to be viewed on the largest possible canvas for maximum impact. Dunkirk rattles the bones as a blockbuster and snaps together like perfectly constructed puzzle. At times it can feel abstract and overwhelming, but always with the purpose of thrusting viewers into the middle of a remarkable story, never merely to alienate.

There’s also mercifully little nationalistic rabble-rousing, just enough to suit the story and always laced with some sort of brutal irony. This film might be obsessively specific about the events on Dunkirk, but it also feels like a more general statement about war. One that plunges viewers headfirst into the terrifying panic of combat, criticizing the act of war as humanity’s deepest madness while also honouring those who triumph and survive. It’s not a conventional summer blockbuster, yet it’s also the most viscerally thrilling cinematic spectacle playing in theaters. After only one viewing, Dunkirk feels like something destined to be studied and remembered. It’s one of the greatest war films ever made, one of Christopher Nolan’s greatest achievements, and might just be the finest film of the year. This is a film that must be experienced to be believed and one that deserves to be seen in the biggest and best theatre possible. Don’t miss it.

An astoundingly well-crafted and deeply affecting war movie that confirms (if there was any doubt) that Christopher Nolan is one of the finest filmmakers of his generation.
REVIEW SCORE
9.5
File Under: Christopher Nolan