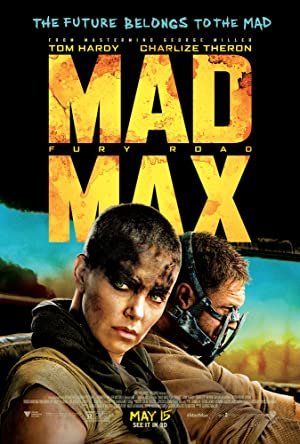 At the tender age of 70, writer/director George Miller should theoretically be curling up with a good book at resting on his laurels at this point. He spent the last few decades making Babe and Happy Feet movies with his influential and unmatched automotive apocalyptic Mad Max epics now a distant memory. Yet, that’s simply not what happened. It’s as if Miller watched the Fast & Furious movies and thought, “That’s cute, boys. Now let me show you how it’s really done.” Miller tops absolutely everything the F&F series has collectively accomplished in the first 20 minutes of his audacious action masterpiece Mad Max: Fury Road, then spends the rest of the movie topping himself and even slipping in some ideas amidst the carnage. Fury Road is easily one of the most viscerally thrilling action movies ever made, a non-stop barrage of intense carnage that pauses only occasionally to give audiences a chance to catch their breath in the interest of public safety. The movie shakes the foundations of contemporary blockbusters to the core, easily topping the over-the-top spectacle of the last 30 years of popcorn filmmaking and daring anyone to attempt to match it’s insanity. Fury Road isn’t merely the blockbuster to beat this summer, it’s an action movie milestone that likely won’t be touched for the foreseeable future. Not bad for an old guy.

Tom Hardy steps into Mel Gibson’s shoes as the iconic “Mad” Max and given that this franchise virtually lacks continuity, it’s not distracting for an instant. A brief voiceover prologue spoken while Max munches down a two-headed lizard establishes Miller’s apocalyptic wasteland for any late comers in a matter of minutes, then the first chase scene begins and the flick never takes its foot off the gas pedal from there until the credits roll. Max is quickly kidnapped and brought back to the nightmarish wasteland wonderland of Citadel. It’s run by the vicious demonic dictator Immortan Joe (Hugh Keays-Byrne who played Toecutter in the original Mad Max as an amusing nod to fans), who keeps his masses at bay with a rationed water supply and milk farmed from enslaved women. He raises crops of face-painted and cancer-ridden War Boys to carry out his evil bidding and assigns Max to be a hood ornament and living blood-bag for one such slave warrior known as Nux (Nicholas Hoult). Charlize Theron stars as Imperator Furiosa, a one-armed warrior assigned to drive a battle truck to gather gas for Citadel. This time she has different plans though, kidnapping Joe’s harem of model-beautiful slave women who he uses to carry his children. Furiosa promises the women freedom and forges a reluctant partnership with Max to drive them to paradise in what essentially amounts to a feature-length chase sequence.

The film has a plot and even some intriguing themes on its mind, but none of this text or subtext ever gets in the way of the face-melting spectacle. The years Miller spent struggling to bring Fury Road to the big screen clearly worked wonders for the script as his imagination went wild delivering some of the most astounding spectacle ever to grace a blockbuster delivered at a relentless pace. Some digital effects were used to heighten the world, but for the most part the action was thrillingly captured through $150 million worth of stunts, pyrotechnics, and imaginative junkyard beauty vehicles. You’ll see such astounding sights as stuntmen flung between vehicles on massive poles while dropping actual explosives in the process. These sorts of stunts deliver the type of cinematic spectacle that glues viewers to their seats, drops their mouths to the floor, and makes them wonder how such astounding feats of filmmaking were achieved without casualties. The pummeling mayhem is all shot clearly and concisely. There’s not a moment when the rhythmic heavy metal editing ever overwhelms the eyes, even when pushing to the limits of blockbuster excess. Miller even peppers his onslaught of action with humor: a favorite image being a live band playing along with the villains at top speed. A guitarist on a bungee cord rocks out with a massive drum section to provide the villains with a live soundtrack and in case you were wondering, yes that guitar also doubles as a flamethrower. It’s a hilarious image to behold and one that isn’t merely tossed in either. Miller has a specific plan for that vehicle in the climax because nothing is wasted in this epic. It all serves a specific purpose that will cause bowels to loosen worldwide as viewers take this remarkable ride.
During the few moments that Miller eases up slightly on action to tell his story and develop his characters, some fascinating subtexts slip in through the cracks. Theron’s character is actually sneakily the protagonist this time and her battle scarred heroine is one of the best to grace the genre since Sigourney Weaver told the Alien queen to, “Get away from her, you bitch.” Theron delivers a pained and humane performance as a woman forced to be a warrior through slavery. Her mission subtly doubles as feminist doctrine, presenting a nightmare world destroyed by men that could well be saved if women were handed the keys to the ignition. Hardy ambitiously and wisely ignores Mel’s performance entirely to create a fascinating new Max. He’s a man so used to solitary survival that he communicates primarily through grunts and monosyllables. The character takes the hero’s journey once more over the course of the film and this time Hardy makes that transition physical as well as internal. Given that Miller’s wildly visual adventure almost plays out as a silent film despite the incredible theater-rocking soundtrack, that proves to be an inspired take on the character. This Max isn’t just a walking ode to macho posturing, but thoroughly damaged soul perpetually chasing redemption and a genuinely tragic hero.

While Fury Road was designed to appeal to audiences completely unfamiliar with the Mad Max franchise, it actually fits into the series nicely. Miller’s goal with his Mad Max pictures has always been to reduce cinema down to its most primal visceral pleasures and classical narrative devices within a popular form of cinema for its era. The original film was pure drive-in revenge sleaze elevated to art, The Road Warrior added R-rated stink and cynicism to the self-conscious Joseph Campbell myth-making that George Lucas was doling out in Star Wars at the time, and Beyond Thunderdome lightened up the series for Spielberg-flavored pop in the mid-80s. Fury Road delivers the living comic book drug that Hollywood chases these days on an unparalleled scale and then sneaks in the feminist slant that critics, bloggers, and tweeters have been demanding from their blockbusters. It’s not just a movie of the moment, but the blockbuster necessary to shake up the popcorn-flogging industry in the ways we’ve all been waiting for. Mad Max: Fury Road is worthy of absolutely all the praise and hyperbole you’ve heard slathered upon it and if possible, it’s actually even better than you’ve been imagining. Buy a ticket immediately and buckle up. This is a wild ride that viewers will praise and debate for years to come. A blockbuster benchmark that filmmakers will struggle to top for the foreseeable future.

Mad Max: Fury Road is worthy of absolutely all the praise and hyperbole you’ve heard slathered upon it and if possible, it’s actually even better than you’ve been imagining.
REVIEW SCORE
9.5
File Under: Action, Charlize Theron, Dystopia, Mad Max, Science fiction