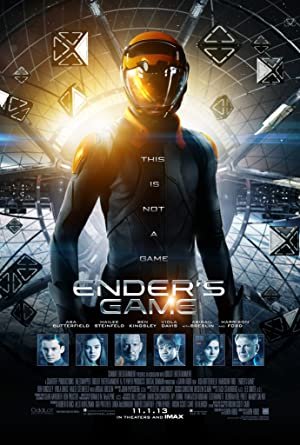 After years of rumors, speculation, and false starts, Orson Scott Card’s cult novel Ender’s Game is finally a movie. The good news is that this is a very faithful adaptation that treats the novel with respect. The bad news is that much like John Carter Of Mars, so many films have pulled from Card’s text for inspiration in the decades it took the film to be made that the material seems somewhat generic now. Everything from The Last Starfighter to Harry Potter or The Hunger Games owes a certain debt to Ender’s Game and even if Card got there first, for those seeing the film without having read the book that won’t mean much. There is still a very interesting film and story here, one well worth seeing for sci-fi fans starved of many serious entries in the genre on the big screen lately. However, it is unlikely Gavin Hood’s Ender’s Game will have the same impact that Orson Scott Card’s Ender’s Game made many moons ago. Still a good flick though, so that’s something.

For those unfamiliar with the text, some plot summary is in order. Let’s do it. In a distant future, earth is reeling from an unexpected attack from an insectoid alien species. Society has a more military focus, with kids wanting nothing more than to qualify for star fighter training in their youth. Ender (Hugo’s Asa Butterfield) is one such teen. He’s a bit of a live wire (like his brother), but he also has a big heart (like his sister). Thankfully, a surrogate father and mother team in the international military notice those qualities (Harrison Ford’s Colonel Graft and Viola Davis’ Major Anderson, respectively). They draft Ender to join their teenage star fighter school. From the beginning, they feel Ender’s impressive tactical skills would make for an ideal space commander. Graft goes out of his way to make training difficult for Ender to mold him into a tough-as-nails leader while Anderson feeds him morality—subjecting him to psychological videogames to subtly nurture his compassion. Gradually Ender rises through the ranks until it looks like the kid just might be worthy to lead humanity to victory, much like his boyhood hero Mazer Rackham (Ben Kingsley).

If that all sounds familiar, it’s because the book was ripped off, homaged, and emulated through many years’ worth of science fiction yarns. However, even all these years and knock offs later, the Star Wars meets Harry Potter set up was too good for Hollywood to resist. Writer/director Gavin Hood was the eventual unexpected choice to mount the blockbuster adaptation. Yes, he made X-Men Origins: Wolverine, but all of his films other than that troubled production were good, so please forgive him. Hood streamlines the story to its core while retaining all of its emotional and thematic heft. He also cast the material rather well. In particular, Asa Butterfield is one of those kid actors so talented that you root for them to succeed, and he adds complexity to the role that others might have missed. Hood also wisely cast Harrison Ford and Viola Davis to type, so even when they step over the deep end into their personal brands of overacting, it suits their characters. Ben Kingsley is, of course, Ben Kingsley, so he nails his part and all the other young actors are better than expected. There’s no denying that Hood can tell a story and work well with actors (despite that Wolverine sized blotch on his resume), it’s the other elements that seemed easier to nail where the film falls apart just a bit.

The film’s major letdowns are in the visuals and action sequences. Given the massive budget Hood had to work with, this is a very slick and professional blockbuster. The problem is that Hood has no particular visual aesthetic to call his own, nor did he hire any designers who could provide one for him. On a purely visual and technical standpoint, Ender’s Game is merely average and serviceable. That’s a big problem for a blockbuster given all of the competition these days and with so many of the film’s story elements feeling familiar through osmosis, a more distinct visual style or visceral approach to the action could have helped set it apart. Sadly, the whole thing feels very average, except for one very important element. Without giving anything away, Orson Scott Card’s story contains a pretty remarkable twist near the end that instantly makes Ender’s Game a far more complex work than it initially appears to be. Thankfully, that twist remains intact, and it’s a pretty shattering moment that takes the film out of blockbuster fantasy mode and into something far more interesting. Had Hollywood smoothed over this moment as usually tends to happen, the movie would be instantly disposable. However, that didn’t happen, and as a result, you can’t shake the film off very easily.

Ender’s Game is no masterpiece, nor does it feel destined to be a cult classic. However, by sticking closely to the source material and filling the cast with talent, Gavin Hood has created a strong adaptation of a sci-fi classic. It should catch audiences of all ages off guard and provide much more food for thought than the average popcorn muncher. With more impactful action, it probably could have even been a bit of a phenomenon. Yet even without it, fans of the genre should be quite pleased. The only strange thing about is the timing of the studio’s release. With a late summer release sometime in August, Ender’s Game probably could have been a sleeper hit. Released in the middle of awards season and a week before Thor 2: Ice Giant Boogaloo, chances are it will have a decent opening weekend and then disappear. That’s a shame, but at the same time at least the material was treated right. The Ender’s Game fans and sci-fi lovers will discover the movie eventually even if not in theaters and it’s hard to imagine they’ll be disappointed. Gavin Hood might not have knocked Ender’s Game out of the park like another director could have, but he did still deliver a better adaptation than we had any right to expect. This is a strong piece of work and one that should not be approached with the intense skepticism normally necessary for adaptations of sacred sci-fi texts. This time, they did it right. Could it have been better? Sure. But it also easily could have been so, so much worse and we should be grateful that an adaptation this strong was at all.

However, it is unlikely Gavin Hood’s Ender’s Game will have the same impact that Orson Scott Card’s Ender’s Game made many moons ago.
REVIEW SCORE
6
File Under: Film, Harrison Ford, Science fiction