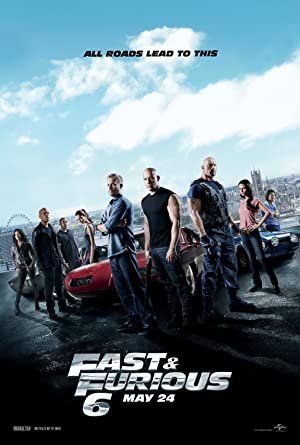 With the exception of the 50-year-old James Bond series, action franchises are supposed to get worse as they stretch out into endless sequels.

Breaking with the action movie formula, these franchises usually peter out with a whimper. Not the Fast & Furious movies. In a bizarre twist of fate, the series somehow turned jumping the shark into a franchise jumpstart. What began as an idiotic ode to street racing transformed into franchise about international vehicular espionage in Fast Five and that stupid left turn somehow dramatically improved the series. As the title implies, the Fast & Furious movies were always pretty dumb, but after director Justin Lin took over for Tokyo Drift they became almost transcendently idiotic. He turned action filmmaking into a $100 million game of Hot Wheels. Suddenly cars were projectile weapons and physics jumped into the realm of Looney Tunes. The cardboard characters entered a phase of self-parody as screenwriters tried desperately to find words for Vin Diesel and Paul Walker to spit out with something resembling credibility. And of course, The Rock joined the team with all of the glorious silliness and excessive baby oil that implies. Entering the sixth chapter, the Fast & Furious franchise is now something for meatheads and irony lovers alike and even if the latest movie doesn’t quite match the delirious accidental comedy heights of Fast Five, it’s sure to be the most gloriously stupid movie of the summer with the biggest explosions. What more could you want?

Fast Five turned our high speed heroes into multi-millionaires set for retirement and the follow-up opens with Vin Diesel celebrating the birth of his nephew to his former nemesis Paul Walker and his sister Jordana Brewster. Then, just when you think the series might take an unexpected turn into becoming a domestic drama with street race interludes, Dwayne “The Rock” Johnson marches onto the screen to pose like a badass on a crime scene with his new partner Gina Carano (she of MMA and Haywire fame). They’ve discovered that generic British bad guy Luke Evans plans to build a dirty bomb to set off in a major city and has assembled a team of mind-bending stunt drivers who look like pro-wrestlers and Victoria Secret models to pull off his fantasy. So The Rock does the only logical thing; he rounds up and hires Vin Diesel’s team of hot rod driving heist specialists to help stop the bad guys. Even though the US government spent millions trying to hunt them down a year ago, The Rock arranges pardons all around for Vin, Paul, Jordana, Tyrese, Ludacris, Sung Kang, and Elsa Pataky to come out of retirement for one last job. Only this time the job is to save the world. As an added bonus, it turns out that Vin’s ex-wife Michelle Rodriguez is still alive, but thanks to the classic screenwriting contrivance of convenient amnesia, has no memory of her past (beyond her awesome driving abilities) and has joined Evans’ evil clan. So not only is the Fast/Furious crew finally on the side of good, but this time it’s personal. Oh boy, here comes some dumb action movie fun!

Furious 6 (the actual, awesome onscreen title Universal sadly didn’t market) completes Justin Lin’s fantastic reinvention of the franchise from dumb gearhead fantasy into self-conscious action movie semi-parody. His action scenes are hysterically over-the-top and feel like they were conceived by 9-year old playing with toy cars while sucking back cans of Coke and boxes of Pixie Sticks. Five cars are chained to a cargo plane to bring it down, the villain designs a metallic low rider that flips cars to turn them into Mario Kart-style projectiles, stunt men leap from moving vehicles for spectacular mid-air catches that defy logic and science, and of course, stuff blows up real good. The film is a candy colored ode to the joys of high-octane mayhem and twisted metal with action sequences so creatively and ludicrously conceived that you can’t help but giggle with awe. The spectacle alone is worth the price of admission and the silly screenplay is the icing on the cake. Lin has turned this series into a shaved head n’ tank top soap opera with cartoon characters whose lives are no more believable than the explosions they create.

Part of the fun of the last two sequels was that it seemed only Lin was aware he was making a comedy, while his cast played the silliness straight for deadpan laughs. This time out, everyone seems to have picked up on how funny Fast Five was and are going for laughs with mixed results. While actors like Tyrese and Ludacris know how to make a one-liner sing, Vin Diesel and Paul Walker don’t have an ironic bone in their body and sometimes struggle while winking at the audience. The movie loses course briefly in the middle as Lin attempts to tie up some plot threads from the last two sequels and the serious thriller material from this section sits somewhat awkwardly with the cartoon surrounding it. Fortunately, the movie flies by so quickly that the stumbling blocks are over fast and stuff still blows up in the process. The real star of the franchise now is Dwayne Johnson, who constructs his performance out of a series of struts n’ wrestling poses and seems to be staring down/intimidating the audience when he isn’t doing so to a co-star. Johnson is having quite a summer with G.I. Joe and Pain & Gain already lighting up the screen, but this no-nonsense super agent is his finest onscreen creation and Lin allows him to trash talk and beat up guys to the best of his abilities. He stole the show in Fast Five and is now rightly positioned in the center of a franchise that is instantly better by having an action star who gets the joke and can shoulder the mix of beat-em ups and one-liners with ease.

Furious 6 is probably a half step back from Fast Five, but that’s only because the element of surprise is gone. The movie is a joke and this time everyone involved and sitting in the theater knows it. Still, it’s hard to imagine anyone predicting that the Fast & Furious franchise would not only last this long, but somehow only get better as the sequels continued to be cranked out. The only shame is that the man who found the perfect “tongue-in-cheek epic” tone for these movies has decided to make part six his swan song. Justin Lin will be retiring from the franchise after this entry. That’s a particular tragedy since his post-credits sting sets up Jason Statham as the bad guy for the next chapter, which is almost too perfect for words (and the second worst kept secret of the summer after Star Trek’s Khan “reveal”). Saw’s James Wan has already signed on for the next chapter, which should get a greenlight shortly after Furious 6 makes roughly a bazillion dollars over the weekend. Hopefully Wan can recapture the idiotic magic of Fast Five and Furious 6 because this series deserves a glorious Statham-flavored finale and the special combination of bonehead stupidity and nitro-fueled thrills that Lin achieved isn’t as easy to pull off as it seems (see the first two Fast & Furious movies for more). Ah well, at least Lin managed to crank out two lovingly ludicrous sequels that were far better than they had any right to be before his car-fu retirement. The summer blockbuster season is a far better, funnier, and stupider place thanks to what he accomplished.

Ah well, at least Lin managed to crank out two lovingly ludicrous sequels that were far better than they had any right to be before his car-fu retirement. The summer blockbuster season is a far better, funnier, and stupider place thanks to what he accomplished.
REVIEW SCORE
7
File Under: Dwayne Johnson, Luke Evans, Vin Diesel