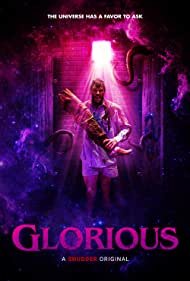 Never did I see myself recommending a science fiction/horror movie about a god behind a glory hole, but here we are. Glorious is one of the more unique movies I have seen come out of the Fantasia Film festival. It is both a movie about the end of the world as we know it, and a personal story about a single man struggling with his own demons. While it can be a strange sit at times, for fans of cosmic horror, Glorious delivers in odd ways.

After a presumed bad breakup, Wes (Ryan Kwanten) finds himself locked inside a remote rest stop bathroom. Waking up after a bender, he has little memory of what he did the night before or how he ended up in such a rough state. That is until a mysterious figure from the adjoining stall (J.K. Simmons) starts talking to him, and explaining just how horrific things in his life have suddenly become.

Little did he expect to find a cosmic god on the other side of a glory hole, but his life has led him to this point, and nothing he can do will change that. Now locked in the bathroom, with no way out, he must do as the strange cosmic god wants, or things could turn out very badly for humanity.

“Glorious does just enough to make some of the more shocking moments memorable, and brings the near indescribable cosmic horrors to life in frightening detail.”

Using minimal location and actors, Glorious manages to build a complex tale of both the end of the world due to horror beyond human understanding, and the personal story of one man who has unravelled beyond repair. With clever use of the limited sets and settings, the film delivers some uniquely twisted effects and concepts that feel far larger than the film may first imply.

Glorious works in part due to the cast. Ryan Kwanten, known for his time on True Blood, works well as the seemingly distressed Wes. His character, in the course of the film, has a much more interesting backstory than first appears. J.K. Simmons and his dead-pan delivery works fantastically well as the ancient cosmic god sitting in the other stall.

The chemistry between the two actors is fantastic. With a great mix of frantic humour, simple comedy and true mania, Ryan Kwanten and J.K. Simmons make what could have been a relatively run-of-the-mill horror story into something memorable and at times hilarious.

The effect, for the most part, works. Glorious does just enough to make some of the more shocking moments memorable, and brings the near indescribable cosmic horrors to life in frightening detail. Even the setting and set-design works well at bringing the narrative to life, with the image on the glory hole working to give the abstract voice a place in the world, all without blowing the effect budget on a single scene.

There is a lot to like about Glorious, and while it will not set the world on fire, it blends comedy, drama and cosmic horror in a unique and innovative way. For fans of the genre, and even for people that are not horror or science fiction fans, the performances by Ryan Kwanten and J.K. Simmons along with the unique concept make Glorious worthy of your attention.

Glorious is a great blend of cosmic horror, comedy and drama, that will make a story about a god behind a glory hole an entertaining ride into madness.
REVIEW SCORE
7
File Under: Fantasia Festival, Horror