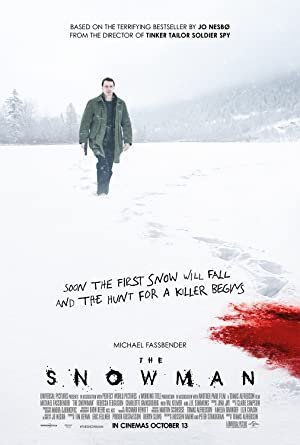 There’s no point in sugar coating it, The Snowman is an absolute disaster of a movie. It’s a tonally confused and at times downright incompetent mess. The sad thing is that so many talented filmmakers were involved in this disaster. People who should know better and in the case of director Tomas Alfredson—Let The Right One In, Tinker Tailor Soldier Spy—one person who has already essentially apologized for the disaster. This lone silver lining is that the film is so ludicrously misconceived and out of control that it is still pretty damn entertaining. Just not necessarily in the ways that the filmmaker intended.

So, this is one of those great detective vs. sick serial killer tales. In this case the detective is Harry Hole—real name—and burned out middle-aged alcoholic played by Michael Fassbender who doesn’t embody any of those adjectives. The serial killer likes to leave snowmen behind in his crime scenes, either looking at the corpse or incorporated into the crime—like placing a severed head on a snowman. This is because when he was a child he watched his mother commit suicide slowly after building a snowman. So frowny face snowmen are key to the killer’s crimes, in fact he even sends the detective in charge of the case a letter with a snowman sketch to kick off the investigation. Once again, this is the actual plot. It has not been exaggerated. Also featured are a brilliant detective protégée portrayed by Rebecca Ferguson, a sleazy businessman played by JK Simmons, a spurned ex played by Charlotte Gainsbourg, and a second unrelated alcoholic detective played by Val Kilmer. So many talented actors, so few scenes actually worthy of their talent.

There are a couple of high points in the film. Specifically, the Norwegian setting is filled with foreboding snowscapes that make for fantastic establishing shots at atmosphere. That’s about it in terms of what went right. In terms of what went wrong? How about everything else. The plot is all over the place with huge gaping holes that don’t make sense. Logic is out the window. The police use a strange and bulky crime-fighting tablet for reasons never fully explained—nor is it even necessary. The killers use cartoonishly complex implements of death for their victims. The actors are all wasted, often having so little to do with the focus of the story—I’m looking at you JK Simmons and Toby Jones—that it doesn’t make sense why they are even there. Val Kilmer’s entire performance has been so poorly redubbed that Spaghetti Western sound crews would be embarrassed. There’s very little that works. Most of it went horribly wrong and embarrassingly so.

Fortunately, The Snowman fails so hard and so often that it becomes rather entertaining. You may not quite understand what’s happening in the story or why, but you’ll always be excited to see how it’ll get worse and more convoluted. Scenes like Chloe Sevigny’s twin showing up just in time for her identical sister to be murdered get big laughs from audiences. The snowman murder set pieces never cease to be enjoyably goofy. The entire Val Kilmer section is so insane that it’s sure to be isolated into YouTube clips and studied by bad movie lovers for months. This big budget adaptation of a best selling thriller might not exactly please those excited to see a beloved airport paperback brought to life, but it will make those will a sweet tooth for irony giggle with delight. That’s something.

It is a shame that this movie turned out so poorly though. It’s been six longs years since Tomas Alfredson’s Tinker Tailor Soldier Spy and the filmmaker seemed so promising at the time that there was a certain level of anticipation for his follow up. Obviously he spent years lining up a project and big names were excited to sign onto his latest creation. Then this mess happens. Afredson claims that he didn’t have enough time to shoot everything he needed explaining the gaps and awkward editing by virtue of the fact that post production was essentially a salvage job. That’s not an excuse. He still made a bad movie despite having the most filmmaking resources at his disposal in his entire career. However, it at least suggests that the Let The Right One In director will be able to bounce back from this. After all, compared to The Snowman absolutely anything that he does next will feel like a return to form. Even if his next movie is bad it’s unlikely to be a disaster on this scale.

The Snowman is an absolute mess of a movie…yet kind of a fun one in it’s utter ineptitude.
REVIEW SCORE
3
File Under: Horror, Nintendo, Thriller, Universal