House of Gucci tells the tale of how Patrizia Reggiani (Lady Gaga) marries Maurizio Gucci (Adam Driver), one of the sons of the owners of the famous fashion house, Gucci—and how she single-handedly leads to the downfall of the family and its company. I did not know anything about the history of the Gucci family, not even the fact that no family member is currently a part of the fashion company.

This film does a great job of showing how each family loses power, wealth and health—as Patrizia grows bolder with her actions. The movie is based on true events and the popular book, The House of Gucci: A Sensational Story of Murder, Madness, Glamour, and Greed, by Sara Gay Forden.

House of Gucci was like a sports car with no engine. It had the capabilities to be great, but sorely lacked pacing and no traction is provided by the film’s musical score. The saving grace of this movie is the dimwit son, Paolo Gucci (Jared Leto). Leto may have had a disappointing Joker performance in Suicide Squad (2016) but he brings the comedic chops and endearing moments that made me want to watch more.

Paolo’s stupidity and ignorance made me feel so bad for him and he was one of the characters I could actually say made me feel emotionally connected to him. The main thing I felt like the movie needed to do was find the right story and hit the emotional beats harder. I needed to see a battle back-and-forth of family members fighting for the Gucci throne.

“… it was like someone in sound editing fell asleep at some point.”

The buildup to the inevitable assassination of Maurizio is somewhat lacklustre as there is mostly silence, no music or anything to support the increasing tension by the end of the film. It made sense to cut any unnecessary audio for the final death scene as it made it an eerie moment—but I wanted to feel like the murder would be more powerful with some epic, strategic music one would find in something like Army of the Dead or F9. I was really hoping for the score to pull through as the soundtrack choices worked in the beginning half of the film, and it was like someone in sound editing fell asleep at some point.

Al Pacino and Jeremy Irons (Zack Snyder’s Justice League) play Aldo Gucci and Rodolfo Gucci, the co-CEOs of the Gucci brand. The film hints at their dismantled unity with some disagreements, yet they have managed to keep the company profitable. The talks the two characters give to one another is very reminiscent of all the men in The Irishman.

Pacino even stars in that film, playing a less powerful character than most of his previous mob films. In contrast to their typical roles, Pacino and Irons show a clear example of the frailty of old men trying to hold on to their power before the next generation kicks them off the throne. The two did their parts for House of Gucci.

It seemed like Ridley Scott just wanted the characters to be at the forefront, without any help from other film components. Gaga and Driver performed their usual best, but that was all it was. It would be unfair to compare Gaga’s Oscar award-winning role in A Star is Born to this tragic tale. However, that movie was meant to make me cry (and it did) and this film was supposed to make me either root for or against Patrizia’s revenge on Maurizio.

I waited for the final act to bring a big elaborate plan from such a smart, strategic woman. Since I do not know the exact details of how this all played out, I assumed the movie did its best to be accurate. If it was accurate, it was pretty straightforward and delivered what it needed. But if this was a dramatic take on the assassination, there were no additional factors that made me feel tense about the impending murder execution.

The sum of this movie can be easily summed up by a line delivery by Paulo Gucci, “Chocolate and **** both look the same but taste different. Trust me, I know.”  This film was like the latter, with tiny nuggets of chocolate. It had some highs, but the lows were abundant. Seeing the reactions from each Gucci family member losing their fortune was great and the actors and actresses sold it so well.

I saw and believed in Gaga and Driver’s chemistry and break-up moments. But the hyper-humping shagging was jarring as I tried to wrap my head around what the tones the director and actors were going for. I think Scott was trying to blend important events from the novel while trying to condense it all within an almost three-hour long timeframe, sadly to its detriment.

House of Gucci was a film with a predictable plot where the stakes lost were seen coming a mile away as Patrizia began her constant steamrolling of hostile takeovers through the family. You can watch it once and then say, “I guess I’m ‘Gucci’ with that.”

House of Gucci tries to show off its Game of Thrones-like story well enough, relying on the actors to carry the film, but fails to bring the drama and excitement to push this out of the rigidity of just following the facts. 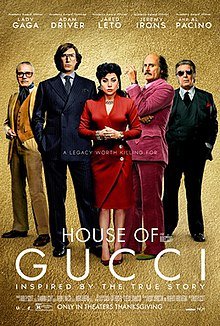