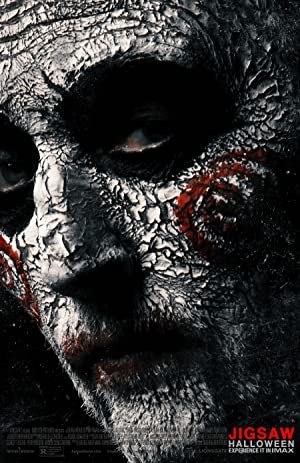 14 years ago a plucky Australian director named James Wan (Insidious, The Conjuring, and the majesty that was Furious 7) created the graphic dismemberment mystery Saw franchise and seven years ago it mercifully ended with Saw 3D: The Final Chapter. However, if we learned nothing from Freddy and Jason and Chucky and their ilk, it’s that you can never keep a good horror icon down. So now, in 2017 with no new horror franchise around to claim the coveted Halloween weekend release slot, Jigsaw has returned. There are no distracting numbers to dissuade viewers from entering a continuity-flaunting series at the 8th chapter, nor will the movie likely play for anyone other than the converted. You’re either onboard with the death trap convolution of the Saw series by now or you never will be. The good news is that as far as unnecessary Saw sequels go, this is one of the better entries.

The plot kicks off just in time for the tenth anniversary of Jigsaw’s initial torture trap killing spree. A grizzled detective (note: there are no other kinds of detectives in the Saw universe) played by Callum Keith Rennie opens the movie chasing down a criminal who announces that a new round of games has begun (uh-oh!). From there we’re introduced to another gang of disposable jerks who are locked into a big ol’ group death trap together, forced to prove how awful they are before dying or losing body parts or both. Simultaneously, Rennie is running around finding bodies and trying to decide if Jigsaw is still alive. He’s primarily assisted by two creepy morgue technicians (Matt Passmore and Hanna Emily Anderson) who work wonders on the corpses to determine the natures of the nutty deaths and who also seem to know just a little too much about Jigsaw’s history. Hmmmm…is Jigsaw actually still alive? Is there some sort of Jigsaw-fan conspiracy? Will anyone really care either way? Only one way to find out!

At this point the Saw movie formula is so set in stone that you pretty much know what to expect before setting foot into the theatre. There will be some ghastly and creative death traps rooted in moral quandaries. Tobin Bell will get a cameo as Jigsaw to whisper out evil words and cement his status as a genre icon. That creepy ass puppet will appear. There will be a detective narrative where mildly recognizable character actors alternate between whispering and screaming at each other while desperately trying to explain the plot to the audience. It will be stupid. It will be confusing. And it will all end with an explanatory montage that ties everything together during one last nasty death trap while that genuinely awesome Saw score pounds through the speakers. Jigsaw does it all and does so fairly well.

It definitely helps quite a bit that former effects artists (and brothers) Michael and Peter Spierig were tapped to direct this time. As proven by their pretty damn great horror flicks like Undead and Daybreakers, the directing duo know how to deliver nasty gore and successful scare sequences to the screen in a very pretty, stylized, and clear way. Budgetary necessity led James Wan and his fellow Saw directors to deliver their films in an aesthetic defined by blurry/jittery camera moves and seizure-inducing editorial overkill. That style was fine for the time, but quickly became dated. The Spierigs actually deliver a Saw sequel where you can see what’s happening and the big scare/gore scenes arrive with a satisfying style and structure. The movie is gorgeous in its delivery of disgusting gore gags and the film flies by with style and confidence. It’s one of the most satisfying Saw sequels, if one of the most unnecessary.

While the final reveal of Jigsaw is rather clever and checks out (at least in accordance with the loony n’ loopy logic of a Saw flick), there’s no denying that it takes a lot of stupid and overacting to get there. The script bends backwards to justify the existence of this seven-year late Saw 8 that takes place a full five movies after the death of the titular Jigsaw. Characterization is limited to “screaming victim,” “scheming hero,” and “red-herring non-villain” with little variance in between. The dialogue is a collection of dry plot-exposition and groaner one-liners. The acting varies from rather good to ‘porn-industry-supporting-player’ bad. It’s a mess, it’s silly, it’s stupid, and it is absolutely needlessly violent in ways that will offend those with an even remotely delicate sensibility. Yet, there are no surprises there.

The downsides to this late Saw sequel are as much recognizable franchise staples as anything that succeeds. Saw movies aren’t high art. They are a mixture of bottom-of-the-barrel genre sleaze, genuinely creative body count horror, and an admittedly awesome comic book super villain level slasher. You watch a Saw movie to giggle and gag at all of the excesses, good and bad. On that level, Jigsaw works. It’s everything that Saw fans want from their stupid Saw experience. This isn’t the best entry in the series, but it actually ranks within the top half. That’d be enough to suggest that this franchise could likely keep going were it not for the fact that the studio waited so long to force out this sequel in front of horror fans’ adoring eyeholes—it’s hard to imagine enough people even care enough to make it a hit. Jigsaw will likely serve as a curtain call for those who still love Saw all these years later rather than any sort of franchise reboot. That’s fine with moi. I was ready for one more round of Jigsaw’s deadly games and I got to see all the nasty filth in IMAX just in time for Halloween. That’ll do. A good and original Halloween horror movie would have been better, but that’ll still do.

Seven years after the supposed “Final Chapter” the Saw series in inexplicably back and surprisingly enjoyable.
REVIEW SCORE
6
File Under: Saw