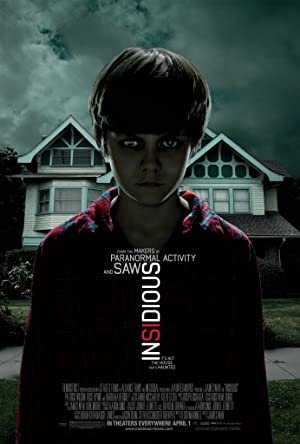 In 2004 Australian director James Wan and his writing partner Leigh Whannell released a little horror movie that they shot in 18 days for a budget of roughly a million dollars. That film was Saw and it instantly became a $100 million hit worldwide. It was always intended to be simply a showcase for the budding filmmakers that they hoped with turn a small profit on DVD and set them up for bigger and better things.

Instead the film became a phenomenon, launched 6 sequels, and along with Hostel kicked off the 2000s preeminent horror trend and media buzzword “torture porn.” How to follow a decade-defining work was a challenge for Wan and Whannell. The pair made it clear early on that they never considered themselves gore merchants (in fact the first Saw is light on gore compared to the increasingly grizzly sequels) and tried to embrace subtle scares with their ventriloquist dummy sophomore slump Dead Silence. When that film bombed, Wan tried to switch genres with the exploitation revenge/thriller Death Sentence, which proved even less successful.

This week writing/directing duo return with Insidious. Having gone through the ups and downs of Hollywood they went back to their indie roots with a new low budget horror flick.  Once again the pair tried to distance themselves from the bloody entrails of Saw with a haunted house movie that frankly could play for kids without a nervous disposition. The good news for the filmmakers is that they have managed to create easily their best movie since their illustrious debut. The bad news is, this isn’t a genre classic. In fact, while the movie showcases Wan’s strengths as a visual stylist, it also highlights their weakness as storytellers. It’s a decent jump scare haunted house ride and works very well for the first hour or so. Sadly, once the standard haunted house hoops have been jumped through and the filmmakers have to find a way to make the story their own it falls apart, succumbing to the convoluted storytelling and cheap reliance on ripping off better movies in the guise of homage that has plagued their work from the beginning.

The film is about an average middle class American family who move into a slightly creepy new house (oh the comforts of convention). Gradually they start to notice something is wrong when things start moving around and disappearing. Their son claims to see people at night and then one day he inexplicably ends up in a coma. With the kid knocked out, the hauntings start to get more intense. They try to move, but the ghosts follow. Paranormal investigators are brought in and it’s learned that rather than a conventional haunting the boy has the ability to leave his body during his sleep and walk amongst the world of the dead. Now that he’s in a coma a door has been open that ghosts are free to wander through untill his spirit is returned to his body. Or something like that anyways. Honestly, the entire plot is hastily explained in one epic dialogue scene to set up an interdimensional climax and it’s tough to tell exactly what mumbo-jumbo Whannel and Wan want us to believe and what we should dismiss. The whole thing probably would have worked better if they’d just stuck to standard haunted house mythology.

You can tell that the filmmakers hoped to create a new spin on the haunted house genre that would spawn a franchise. Unfortunately whatever they thought this sleep-walking/portal-hoping twist would bring to the genre just doesn’t work. It’s too convoluted and confusing. The best material in the movie is standard spook house stuff: mysterious figures emerging from the shadows, creepy rotting-faced ghosts, sudden bumps in the night, creeping camera movies down eerily empty hallways, etc. There’s nothing new here and more than that the entire structure and style of the film rips off Poltergeist in a way that I’m sure they considered as homage, but feels closer to plagiarism. The gradual appearance of supernatural elements into an idealized suburban setting is the same as is the way the family’s skepticism turns to cheerful fascination before finally terror. However, that’s standard haunted house stuff that happens to be in both films. Insidious becomes uncomfortably close to Poltergeist when a team of nerdy paranormal investigators lead by a calming mother figure are hired to check out the disturbance. The characters even look like the nerds from Poltergeist, except for their equipment, which is knocked off of Ghostbusters. After that, the climax involves a parent walking into the nether world to save their child with only the guiding voice of a psychic to aid the journey. Again…exactly like Poltergeist. It’s irritating, but more importantly it invites unfavorable comparison to an infinitely superior film.

There’s no getting around it, Insidious is a deeply flawed movie that pushes to the limits of Wan and Whannell’s meager talent. That said, it’s not a total waste of time. The film is an efficient scare factory and Wan certainly knows how to shoot a horror movie even if he doesn’t know how to construct a story. The Poltergeist rip-offs are frustrating for horror fans, but it’s unlikely most audience members will even notice. The acting is decent (especially from the comic relief ghost nerds) and the production values are solid. This is a good sleepover horror movie for kids and will probably have a decent shelf life by virtue of the fact that not many of those are made anymore. Despite what some have said, Insidious is not a classic horror movie in the making. However, it is a strong example of the haunted house horror subgenre and there hasn’t been a movie like it in a while. If you go in with lowered expectations and look for little more than an average funhouse horror romp, you’ll probably have a good time. Just don’t expect anything special. You’ve seen this all before and it’s very clear now that Wan and Whannell made a major horror movie their first time out by accident.

This is a good sleepover horror movie for kids and will probably have a decent shelf life by virtue of the fact that not many of those are made anymore. Despite what some have said, Insidious is not a classic horror movie in the making.
REVIEW SCORE
5
File Under: Horror