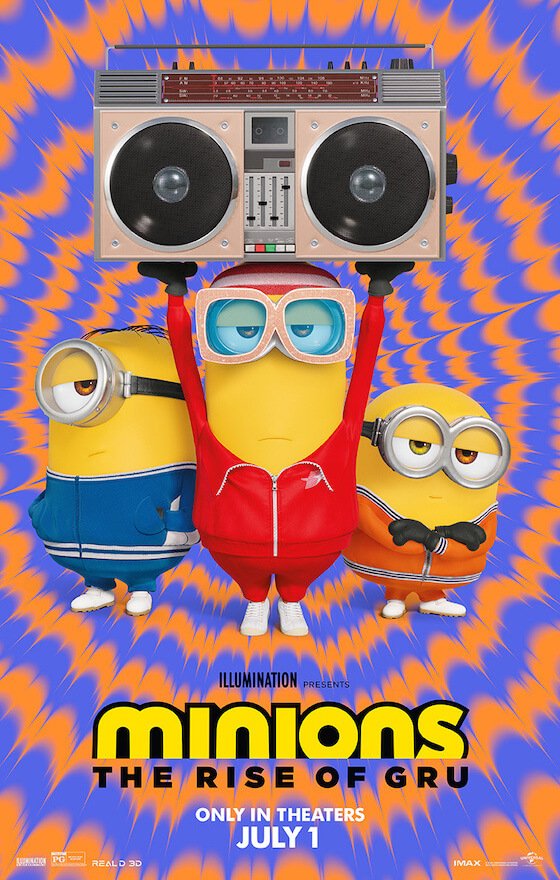 Minions: The Rise of Gru elevates the charm of its iconic yellow creatures with a plot that sticks. Families will be satisfied with the mere presence of the Minions. But the prequel brings back its most despicable character for a solid entry that’s equally fun.

It doesn’t take a henchperson to figure out why viewers want to see The Rise of Gru. Each diminutive, bubbly and chaotic minion steals every scene they’re in. The film easily finds slapstick comedy and surprisingly adorable moments throughout. It’s harder for serious moviegoers to not crack a smile at those minions with The Rise of Gru. Minions are as personable and petty as they come. Kids and adults will especially love seeing them subjected to just about every animated bit of PG torture. Here, The Rise of Gru serves up a variety of comedy bits that hit harder with stakes.

Kyle Balda carries filmmaking duties from Pierre Coffin (voice of the Minions and Despicable Me series director). He also wastes no time connecting The Rise of Gru to the bigger Despicable Me universe. There’s plenty to tolerate from another franchise byproduct. But The Rise of Gru stands on its own with thoughtful storytelling decisions. More importantly, the titular minions have a bigger purpose than aimlessly bumbling their way through a 90-minute runtime.

The Rise of Gru takes place after its spin-off Minions. The 2015 film’s final minutes saw a young Gru (Steve Carell) take over an army of minions after stealing Queen Elizabeth’s crown. The Rise of Gru goes all-in on what Minions should have as a core entry to Despicable Me. It’s hardly essential. But the prequel breathes new life back to Gru, who tries to prove his worth as a super villain. Gru wants to join the Vicious Six, a team of villains who exist around their caricatures.

Steve Carell’s voice is modulated beyond recognition for a 12-year-old Gru. Families won’t see the sinister and jaded character from Despicable Me. Instead, Carell finds new energy as an ambitious and mischievous villain in the making. The Rise of Gru brings out his inventive charm. Viewers put up with a number of callbacks to the first Despicable Me.

Younger audiences also see the budding relationship between Gru and newly hired minions. Gru’s size and energy match the minions with surprisingly fun chemistry. Franchise followers who like Gru’s fun side see it much more here. The opening scene sent the most laughs as Gru unapologetically wreaks havoc on his neighbourhood.

The Rise of Gru is able to give viewers just enough minion mania. Eyes get to cool off by showing Gru’s story. This Minions sequel feels more balanced by adding Gru’s arc. It takes one twist to change up Gru’s role as a supporting character for the minions. This is ultimately a Minions movie first. Families will bask in gibberish, toilet humour and pop culture references.

Gru’s own growth is sidelined without much development for the first film. But these story beats are stitched in between the familiar brand of Minions mania. It hardly passes as a prequel without some cheeky Easter eggs near the end. The Rise of Gru still makes an effort to use its main character across 90 minutes.

Kevin, Stuart and Bob carry a whole franchise over their stubby heads yet again. The Rise of Gru sees the iconic trio on another journey to serve “miniboss” Gru. The trio still entertain with their minds and bodies. Children won’t get enough of their bickering. Parents and adults could appreciate the film’s creative ways to sidetrack them. I won’t give away The Rise of Gru’s funniest bits, while some best involve a pet rock, an airliner and San Francisco’s Lombard Street.

The newest minion, Otto, is a surprisingly hilarious scene-stealer. Rocking braces and a lack of self-awareness, he finds himself making dents in the plot. The Rise of Gru fits Otto in the most random situations. While Kevin, Stuart and Bob are steps behind—Otto unexpectedly comes out on top with dumb luck. It’s a baffling brand of comedy parents will appreciate as their kids inevitably rewatch The Rise of Gru for years.

Michelle Yeoh keeps her comedy chops going after Everything Everywhere All at Once. As Master Chow, Yeoh trains the minions in a subplot. It barely works through cheesy kung fu references adults can roll their eyes over. But kids find more reasons to laugh as Kevin, Stuart and Bob are tested by Master Chow. These scenes amount to a wacky action-packed climax that doesn’t win any creativity points.

The Rise of Gru’s star power is seriously underused. The film’s Vicious Six include Belle Bottom (Taraji P. Henson), Wild Knuckles (Alan Arkin), Jean-Clawed (played by Van Damme himself), Stronghold (Danny Trejo), Nun-Chuck (Lucy Lawless) and Svengance (Dolph Lundgren). The stars appear on-screen together but don’t leave a lasting presence. The Vicious Six put most of their attention towards minions, while Gru’s story misses a few steps without them after the first act.

Collectively, the villainous voice cast comes as over-the-top as it gets. But each member gets no individual chance to steal the show. The first Minions film worked by keeping its villains simple and gave them an arc. Here, The Rise of Gru wastes its talent in short bursts. Wild Knuckles is the only member to have an arc—something that ties neatly with Gru’s own story. Without spoilers, their chemistry as devious villains took me by surprise with some emotional fluff.

Illumination stays top-notch for animation. Five films in, The Rise of Gru is stylish at best. Viewers of all ages can appreciate the studio’s level of detail. Minions are packed with distinctive animations. Kids can spot the funniest ones in a crowd full of them. While animators clearly had fun subjecting a few of them through easy-to-miss gags. The Rise of Gru will impress eagle-eyed adults in a surprising number of ways. A creative touch of the 70s helps make this Minions film refreshing. The prequel still continues on the funky wave in 1976, and Illumination takes every advantage of the setting to paint a vibrant San Francisco.

Minions: The Rise of Gru is a surprisingly welcome addition to a saturated franchise. Director Kyle Balda adequately juggles minion-sanity with a consistent plot. The sequel manages to top Minions by adding Gru with Steve Carell’s much-needed return. The Rise of Gru builds its most hilarious Minion bits around a prequel. Kevin, Stuart and Bob are at their best without overdoing it. The Rise of Gru does its cameo-studded cast dirty in a struggle to juggle characters. But viewers of all ages will get exactly what they want out of the minions – if not a decent animated comedy.

Minions: The Rise of Gru keeps delivering on a chaotic spin-off filled with visual humour, but benefits from improved storytelling for its iconic yellow trio and Steve Carrell's return.
REVIEW SCORE
7
File Under: Despicable Me, Illumination, Minions