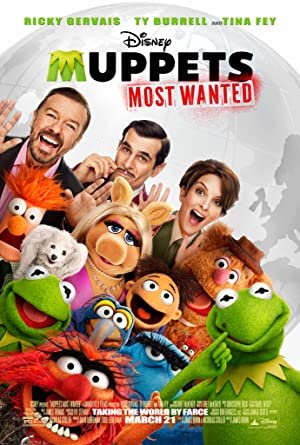 Something magical happened when Jim Henson and felt got together in the 70s. The man turned hand puppets into an industry of sweet n’ cynical humor that has somehow managed to last for 40 years. When Disney picked up the rights to the Muppets in the 2000s, there was legitimate cause for concern given that the spate of 90s Muppets movies weren’t exactly the crowning achievement in the franchise. But, the studio made the surprisingly smart decision of hiring Jason Segel and Nicholas Stoller to write the movie based on a single joke in Forgetting Sarah Marshall, who then brought in Flight Of The Conchords director James Bobin and songwriter Bret McKenzie. Together, the foursome managed to recapture the whimsy and the silly of The Muppet Movie for a new generation. Now the team is back (minus Segel) for an inevitable sequel that cuts back on the heartstring pulling for a poppy puppet romp along the lines of The Great Muppet Caper. It’s not quite as strong or heartfelt as the last movie, but it is more consistently entertaining. I’ll take that, especially given the big stupid smile it slapped on my face.

The tone is set immediately when this film picks up seconds after the end of the last movie (along with some amusingly obvious Jason Segel and Amy Adams body doubles) with a musical number gently mocking the problems with sequels. From there, the movie suffers from a case of unnecessary sequel-itus (the plague of Hollywood). Yet, just like the opening song, it falls into all those traps with a wink and a giggle and as a result, they get away with it. Following the success of their big LA stage show from The Muppets, Kermit and co. decide to embark on a European tour. Their manager is Ricky Gervais’ Dominic Badguy, and as you might have noticed from his name, Gervais is not to be trusted. He is in fact an international jewel thief partnered up with the most evil felt frog on the planet Constantine. Aside from a mole, Constantine looks exactly like Kermit, so Gervais pulls a switcheroo on the Muppets. Constantine ends up headlining the tour as Kermit (turning the shows into an alibi for a string of robberies) while everyone’s favorite frog is sent off to a Russian gulag where he rots away alongside the likes of Danny Trejo and Ray Liotta under the supervision of Tina Fey’s Kermit-obsessed warden. The plot is pretty dumb and clichéd, but deliberately and knowingly so in a way that allows for dozens of self-mocking gags (a personal favorite involves popular Muppet characters popping up to complain that they’ve been ignored in the new movies).

Ultimately, this sequel is little more than a loosely structured vehicle for Muppets gags and celebrity cameos. Some might call the approach lazy, others will acknowledge it all as homage to past Muppet projects that did the same thing. Were the hit-to-miss ratio of said gags n’ cameos not so consistently high, the criticisms would be fair game. Thankfully, Bobbin, Stoller, McKenzie, Kermit, and the whole gang know exactly what they’re doing. The secret to the success of Muppets Most Wanted is that the filmmakers’ love and understanding of the Muppets hasn’t changed, even if their motivations have shifted slightly. These characters are still hilarious and charming when done right (even if the voices aren’t exactly perfect), and the team sure does get it right. Granted, aside from Kermit and Miss Piggy, none of the Muppets get much in the way of a dramatic arc, but that’s not really necessary in a puppet movie. What they all get are good gags and some equally winning support from the Muppet-loving humans around them, particularly Fey and Gervais who take great delight in mugging it up in ways that only work when you’re surrounded by hand puppets.

Sure, this sequel is not even close to as heartwarming as the last movie, nor will it’s most self-conscious gags work on the target audience of children (unless the kids are well versed in The Seventh Seal and the works of Danny Trejo). However, that’s thankfully just a tonal shift in direction and not a movie-killing mistake. If 2011’s The Muppets was an homage to the “putting on a show” sentimentality of The Muppet Movie, then Muppets Most Wanted is an homage to the anarchistic piss taking of The Muppet Show. So, the flick is true to the source while still finding its own delightful tone. McKenzie’s songs continue to charm, and James Bobin’s direction is only getting better (in its best moments, the movie feels like a light comedy/thriller with hand puppets). Everyone involved might have been unconventional choices to helm the Muppets at the time they were hired, but they’ve all proven to be the perfect guys for the job. Hopefully they’ll all stick around for at least one more cinematic Muppets romp because it would be nice to have more wonderful Muppets movie before the series inevitably devolves into Muppet mediocrity again. It’s only a matter of time, so let’s squeeze all the nostalgic juice out of these perennial felt favorites while we can.

The secret to the success of Muppets Most Wanted is that the filmmakers’ love and understanding of the Muppets hasn’t changed, even if their motivations have shifted slightly.
REVIEW SCORE
8
File Under: Comedy, Film