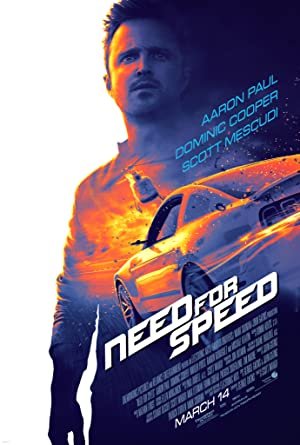 In the pantheon of video game franchises turned into movies, Need For Speed is certainly an oddball choice for adaptation. The bad rap on game-to-film adaptations stems from the fact that most of the early games adapted, like Super Mario Bros., Mortal Kombat or Street Fighter had no real plot for the filmmakers to latch onto, only colourful characters and a bizarre world. So it was easy for critics to say, “If these games have no story, why translate them into a storytelling medium, ya’ bunch of morons!” Now we have a plethora of games with fantastic stories executed in a cinematic style that would be well suited to film adaptation like say Uncharted, Dead Space, or BioShock and none of them have been taken to the big screen thanks to the video game movie stigma. Instead, we’ve gotten Need For Speed, a movie based on a game dedicated entirely to hot rod street races and police chases with no memorable characters or plotlines to speak of. So, it’s more of the same, but at least this time the movie is hinged on car chases, one of the great cinematic pleasures from Bullitt to The Fast And The Furious.

Weirdly, and for the first time, this video-game-to-film adaptation can be criticized for having too much plot rather than not having enough. That’s not to say that the movie is weighed down by a complex story that will lose audiences, just that the flick is over two hours long, and that’s far too much butt-numbing for what is essentially an exploitation movie. Breaking Bad’s Aaron Paul (he who turned the word “bitch” into a poetic expression of inner angst and a sweet catch phrase) stars as a stud mechanic and a totally awesome driver. We know this because in the early going he cleans up an American muscle car to make a killing for the film’s resident evil dude played by Dominic Cooper and he wins a street race. Then Paul takes part in another street race with Cooper along with his bestest buddy for the prize of three ridiculously expensive cars and ego-stroking pride. Cooper is a jerk, so instead of losing he kills Paul’s bud in a car crash and gets him arrested for illegal street racing. So Paul goes to jail. About 40 minutes of screen time has passed and the plot has only just been set up. At this point, you might start shifting in your seat out of boredom and frustration. But don’t worry, the movie is about to take off (finally).

Paul walks out of prison determined to take some revenge. He decides to take on Cooper in an illegal superstar car race run by an eccentric billionaire played by Michael Keaton (awesome!). Paul needs to win the race to a) clear his name, b) avenge his buddy’s death, c) get revenge on Cooper and d) save his family’s garage. That’s a heck of a lot of clichéd motivation, so Paul has plenty of reason to brood and shout for the rest of the movie. He gets that sweet car he cleaned up back to participate in the race, and it comes along with Imogen Poots who will ride with him and act as a love interest. From there, Paul and Poots must race to the movie’s climatic race and to make things more complicated Cooper puts a bounty on Paul’s head amongst the world of illegal underground racers (yep, it’s one of those movies). That means that Paul must enter in a series of mini death-defying races in the middle of his race across the country to take park in an even bigger race. That’s a lot of races, people.

In fact, from the 40-minute mark on, stunt-man-turned director Scott Waugh essentially tells the entire story of the film through car races. Not a bad idea and Waugh is pretty damn great at it. Coming from a stunt background, the director said “Patooey” to CGI and staged every single automotive feat physically to stunning effect. There are some remarkable death-defying stunts on display here, the likes of which haven’t been seen in a while. Even better, he shoots the hell out of the chases and crashes, mounting cameras in every position imaginable, including on cars while they are flipping and exploding (which is a pretty amazing effect). There’s no denying that Waugh is a fan-damn-tastic action director and creates some truly amazing sequences (as well as some truly amazingly stupid ones that will have audiences giggling endlessly). The trouble is that he’s not particularly good at non-action filmmaking.

Every dialogue scene is shot in swooping camera moves in an attempt to add drama that never works. The characters are completely absurd and laughable in the worst possible sense (especially Paul’s pilot buddy who shows up only when it’s most convenient in an action sequence). The plot is filled with holes and idiotic ideas (ex: even though the police desperately want to shut down the climatic race, they make no attempt to hunt down Michael Keaton’s organizer despite the fact that he broadcasts about the event 24 hours a day online. Likewise Keaton appears shocked when there are car crashes and malicious drivers in his race, even though that would seem to be the entire point of an illegal street race.) Basically any scene in the movie that doesn’t involve action is idiotic and/or boring, without any of the campy or ironic humor from recent Fast & Furious sequel. Things are saved slightly by the fact that Waugh cast naturally charismatic actors like Paul, Poots, Cooper, Keaton, and Rami Malek who are always enjoyable to watch on screen even if they are playing cardboard cutouts. Their presence helps make the movie bearable, but not enough to overcome the many shortcomings.

Need For Speed certainly has plenty of high-octane entertainment and action movie stupidity/simplicity for the target audience of adrenaline junkies. That’s enough to make it worth seeing and there are certainly some strong moments (in fact, I’m certain a spectacular hour-long highlight reel could be cut together that’s infinitely better than the actual movie). The trouble is that while the Need For Speed games can coast by on automotive mayhem alone, films live or die on the strength of their stories and characters, which is a pretty massive problem with the movie. Sure, it’s fun, but it’s punishingly long and more than anything else serves as a feature-length reminder of how good the recent Fast & Furious sequels have been. Any movie that makes you long for the sight of Vin Diesel chasing The Rock in a muscle car is a movie that has gone very wrong. The crappy videogame movie streak continues, but at least this one is moderately better than most. So that’s something.

Coming from a stunt background, the director said “Patooey” to CGI and staged every single automotive feat physically to stunning effect
REVIEW SCORE
6
File Under: Film, Need for Speed