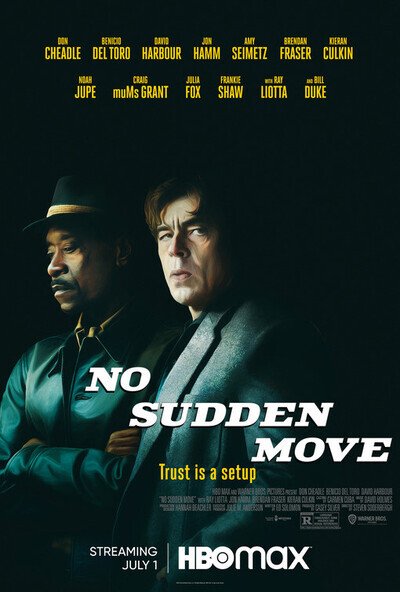 Look, I’m a simple man: I see Soderbergh, I’m in. The premise of a crime thriller with Don Cheadle and Benicio del Toro would have sold itself 30 years ago. But as soon as I saw “Ray Liotta, Kieran Culkin, Brendan Frasier” flash on the screen, I knew I was in for a treat.

To say anything about the specifics of the plot in No Sudden Move beyond the premise of three men entering someone’s home would spoil far too much. The pacing is on point and no time is wasted. We’re on the job in 15 minutes. We get to learn about these characters gradually and naturally, rather than be forced into it by a ham-handed script. “A job gone wrong” is such a basic concept that’s been done a million times over, but everyone is game for it. And I mean everyone.

We get to see multiple perspectives though No Sudden Move, which works because all of the cast delivers, even some of the hammier performances like your classic Ray Liotta unhinged tough guy. Don Cheadle commands the screen as Curt Goynes, and Benicio del Toro is content with a nuanced, softer role. They all fit comfortably into their own character skins and no one feels miscast. I also have to give to Soderbergh for giving us a understated cameo that doesn’t feel too distracting.

“it comes back together in the final moments [of No Sudden Move].“

As we learn more and more about what the actual score is and how the job evolves, we’re taken along an increasingly thrilling ride, albeit with a few bumps. The second act does get a little convoluted: the calm before the storm as we deal with the plights of multiple characters (not all of which are equally thought out from a narrative perspective); but then it comes back together in the final moments.

It can feel meandering. In fact, some people will find it meandering, and it doesn’t quite have that Coen brothers wit to the script that will make you laugh out loud. A few of the overarching themes and messages also get lost under the veneer of the thrill, but it’s not enough to sink this ship that’s content with moving from uncharted island to island.

No Sudden Move is a breezy way to spend a weekend if you’re keen on thrillers. The stacked cast is more than just a bunch of names to put on a poster, and everyone deserves credit for coming together and making each character play off each other in an interesting way. It’s not going to reach the levels of modern heist classic, but it occasionally tries to do something different and mostly comes out on top.

No Sudden Move is a breezy way to spend a weekend if you’re keen on thrillers.
REVIEW SCORE
8
File Under: HBO Max, Streaming