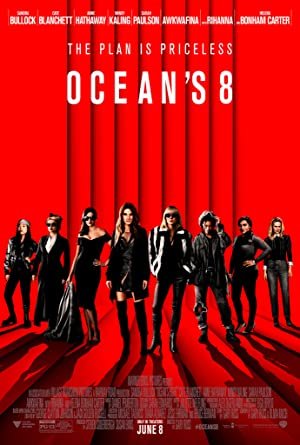 The Oceans series is one of the easiest examples to point to when it comes to popcorn entertainment unique to the medium of film. They’re not particularly deep and its cast of characters don’t feature any meaningful development, but they’re stylishly crafted, somehow balance a magnetic cast, and are often unpredictable. Ocean’s 8 manages to hit a lot of those same notes minus the symphony of the latter.

Just to be clear, Ocean’s 8 is not a reboot, but a full-on sequel with a new cast. Its anchor: Debbie Ocean, played by a confident Sandra Bullock. As you might have gleaned Debbie is related to Danny Ocean, George Clooney’s father-figure and master conman from the original trilogy, which itself was born out of a re-imagining of the 1960s heist film, Oceans 11. There’s history here, and I think Ocean’s 8 manages to walk upon that hallowed ground by treading lightly.

True to Ocean form, we don’t get much character development here, and without spoiling anything major, there aren’t very many conflicts. Oceans 8 instead manages to pare down nearly everything, from the hardships to the actual job itself, and present a more digestible version of the formula. That’s not to say that the cast doesn’t sell it though, because they absolutely do.

There wasn’t one person I wasn’t particularly impressed with (minus the relatively bland side-antagonist played by Richard Armitage), even if they didn’t actually contribute much to the actual heist itself or the overarching plot. Anne Hathaway could have easily been a throwaway part of the film but ends up stealing the show, and Helena Bonham Carter puts on an acting class despite the few scenes she’s in. I wanted to see more of “Lou,” Cate Rusty Ryan (Brad Pitt) amalgam, as the “less is more” angle of their relationship didn’t really hit as hard as the creators wanted it to, and there wasn’t really a connection there.

I can get through the lack of conflict and style over substance, but one thing was made clear over the near two-hour runtime that holds back the film:: Gary Ross is no Steven Soderbergh. Whenever I see cross-cuts in any medium I immediately think “Soderbergh,” as the cinematographic master has perfected the art over the course of his 30+ year career. But here, Ross, who helmed the worst-shot Hunger Games entry to boot, has his work cut out for him and doesn’t rise to the occasion. Several shots are either clunky or played straight, robbing us of the tension we deserve and have come to expect.

Despite some misgivings, Ocean’s 8 is a feel-good heist film that manages to stand on its own two feet while doling out just enough fan service to keep itself in check. Sandra Bullock and company only have room to grow from here if the powers that be decide to give us more.

Oceans 8 manages to capture what made the original series so enigmatic, even if it plays it a little too safe this time around.
REVIEW SCORE
7.5
File Under: