The Thrill Of The Hunt 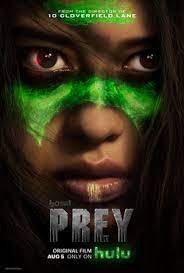 Throughout my viewing of Prey, one sentence kept springing to mind: “How the hell is this not getting some form of theatrical release?” The answer: A mixture of studio politics, pre-Disney acquisition contracts and Disney wanting a big franchise to bring people to Hulu. It’s an understandably frustrating answer made even more frustrating by the fact that not only does Prey feel designed for a theatrical experience, it’s the most exciting Predator movie since the original.

This prequel takes us all the way back to the 18th century, in the year 1719. The movie centres on a young Comanche hunter named Naru (Amber Midthunder). Naru is determined to prove herself as a warrior to the rest of her tribe by completing her “Ku̵htaamia”, a Comanche rite of passage that involves hunting something that’s hunting her. That opportunity quickly presents itself by the appearance of what we know as The Predator (Dane Diliegro), a technologically-advanced alien warrior that hunts other species for sport.

Prey is essentially a Predator movie with all the fat trimmed out. The movie is razor-focused on one thing: The game of survival between Naru and the Predator. There aren’t really any side characters who get any real character development aside from Naru’s brother Taabe (Dakota Beavers). Most of the other characters are really more-or-less cannon fodder for the Predator whenever the blood eventually flies—which it does in spades. Thankfully, the action is well-shot, and, while it’s mostly all CG blood, manages to remain visceral and exciting.

“Director Dan Trachtenberg does a fantastic job making Prey feel both familiar in spirit to fans, but feels refreshingly different.”

Director Dan Trachtenberg does a fantastic job making Prey feel both familiar in spirit to fans, but feels refreshingly different. The Predator itself has a new look, sporting a bone mask and creative “prototypes” on its classic arsenal. The setting is especially refreshing. We don’t often see Native characters in this time period as leading characters and its dedication to authenticity from the culture to the weaponry is a major plus. While the screener I received only had the movie in English, 20th Century is releasing a full Comanche-language dub on release. There’s one scene in particular involving a language barrier where the movie being in English personally caused a small disconnect, so I’m looking forward to seeing it again with that dub.

Speaking of which, Amber Midthunder delivers a truly star-making performance here. Naru is an absolute badass, and seeing how she grows into her skills to overcome this seemingly-unstoppable threat leads to a large number of “hell yeah” moments throughout its 90-minute runtime. While he doesn’t get as much screen time, Dakota Beavers also delivers an impressive debut performance.

Despite the aforementioned frustrations, Prey is a streaming film that’s well-worth your time. It’s a franchise movie that completely manages to stand on its own feet while almost never relying on nostalgia. While it does take its time to get to the action, Prey delivers everything you could want out of a Predator flick. I’m hoping that future instalments can build on the idea of the Predator taking on different cultures in different time periods.

Prey is a bloody and badass return to form for the Predator franchise.
REVIEW SCORE
8.5
File Under: Hulu, Movie, Predator, Prey, Review