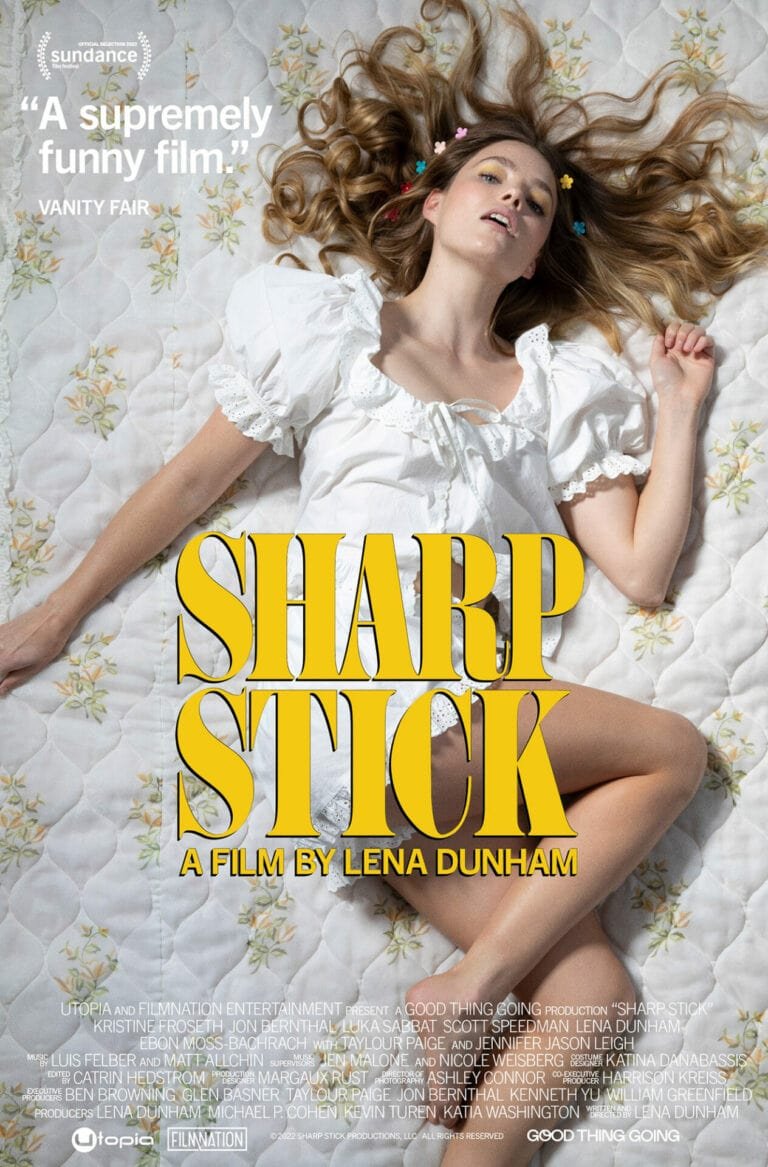 As a part of the Fantasia Festival 2022, I was able to watch Lena Dunham’s Sharp Stick. Dunham both wrote and directed the comedy, and plays a small, but significant role, Heather. The cast is rounded out by Jon Bernthal, Kristine Froseth, Jennifer Jason Leigh, and somehow even Scott Speedman got on board.

Heading into what I thought was going to be provocative and sexy, Sharp Stick was actually charming in its own—very niche—way. The story surrounds Sarah Jo (Froseth), a (very young) 26-year-old virgin who feels unseen. Her family is what most would consider highly inappropriate, with Jennifer Jason Leigh playing Marylin, Sarah Jo’s extremely progressive mother, who we meet sharing her children’s “origin stories” in graphic detail.

Sarah Jo is doing her school placement with couple Josh (Bernthal) and Heather (Dunham), taking care of their son. After a hypersexual conversation at home, Sarah Jo corners Josh in the laundry room, exposing scars on her stomach, and asking if he thinks she is beautiful. The whole scene is incredibly uncomfortable to watch (on purpose). Sarah Jo’s innocence makes what happens from here almost feel like it is breaking some laws, but she is indeed 26, just a very inexperienced, innocent 26.

“Sharp Stick becomes a montage of giggles, secrets and sexcapades.”

And yet, somehow in this awkward encounter, we feel for both characters. Bernthal brings an endearing quality out in Josh, who is very clearly cheating on his pregnant wife in their home. And Sarah Jo, knowing he is married, pursues this, but we want her to succeed, exploring womanhood and sexuality.

From that moment on, Sharp Stick becomes a montage of giggles, secrets and sexcapades. In that we see Sarah Jo come out of her shell, experience things she never could before and many things about her change. Forseth brings forward her character’s transformation beautifully, from uncomfortably young and shy, to an experienced, satisfied woman.

For reasons that make no sense whatsoever, I found myself rooting for the affair. The pair were sweet and quirky. It was hard not to fall in love with them, despite the plethora of reasons not to.  And then…it all falls apart. When everyone needs to come face to face with what they’ve done, and that this is, indeed, an affair, you’re snapped back into reality and out of the fairy tale you’ve been living in with the couple.

“Bernthal and Jennifer Jason Leigh are the best parts of Sharp Stick.“

Sharp Stick could have gone in two completely different directions at the point of Sarah Jo’s heartbreak. The choice to turn it into an out-there comedy really prevented any more compassion for the characters. Sarah Jo now just seemed hysterical, rather than just longing to be seen. Josh just ended up being scuzzy, and Heather sort of a fool.

Bernthal and Jennifer Jason Leigh are the best parts of Sharp Stick. Bernthal played both sides of his character well, taking just one scene for viewers to switch from loving him to hating him. He begins the film charming and funny, and perhaps a little awkward, and at the drop of a hat becomes a blubbering fool when the truth about his past is exposed. He gains no real redeeming qualities after that point. Leigh’s out-there portrayal of “mom” was comedy gold, and a complete switch from her motherly role on Atypical.

Kristine Forseth brings out a beautiful innocence in her character, and it would have been nice to see that grow into something other than being well-sexed while maintaining her immaturity. Even what would likely be the most significant thing about her, having a complete hysterectomy as a teen, didn’t seem to be used in any significant way.

Sharp Stick was a humorous take on issues that could have a lot of depth. A lot of opportunities for growth were missed, making this film fun, but fruitless.
REVIEW SCORE
7
File Under: FANTASIA, Fantasia 2022, Fantasia Festival