Anime is often looked down upon by hoity-toity snobs. “It’s too melodramatic.” “It’s silly.” “Their eyes are too big.” I’ve heard riffs on those statements for years at this point. Yet few people ever try to challenge their preconceived notions enough to give it a shot. If they did, they’d see all of the advantages certain series and films have on Tinsel Town movie and television productions. One particular example that comes to mind is Neon Genesis Evangelion, which to this day is one of the most intricate, layered, and nuanced examinations of the human psyche I’ve ever witnessed.

It’s interesting, then, that the director of that landmark series is at the helm of a Godzilla flick, Shin Godzilla. Unless, that is, you are familiar with Mr. Anno’s background in kaiju fandom and his slavish devotion to all things Ultraman and Kamen Rider. This is a man who loves big buildings getting levelled by even bigger monsters, but also devotes a significant portion of his work to thoughtful ruminations on the human condition. A thoughtful, introspective nerd, for all intents and purposes. This results, then, in his truly epic Shin Godzilla being part classic kaiju film, part intricate critique and examination of the global sociopolitical scene.

Just by doing this, he’s made a better movie with Shin Godzilla than I’ve seen come out of Hollywood in possibly a decade, with the sole exception of Mad Max: Fury Road.

The set-up of Shin Godzilla is simple enough. A giant geyser of water shoots out of the ocean surrounding Japan, and shortly thereafter, a strange reptilian creature crawls out of the water and starts terrorizing a small town. The Japanese government doesn’t do much of anything, however. Instead, they hold several board meetings talking about board meetings they need to plan, and start kicking around the idea of what ought to be done. Meanwhile, buildings are being levelled, people are dying, and whole populaces are being uprooted. By the time a smidgen of a plan is formulated, it’s too late—the strange creature has already fled back into the ocean. Then, weeks later, it comes back. Only this time it’s twice the size, bi-pedal, and capable of incinerating whole city blocks with radioactive breath.

Anno, however, doesn’t handle this the way Michael Bay or any of his many two-bit imitators would. Most of the movie isn’t focused on Godzilla smashing cities or blowing things up. Instead, it’s steeped in detailed discussions of international relation snafus and intricate depictions of scientific methods. Doddering old men stick to the rigid confines of bureaucracy. Foreign powers try to strong-arm Japan while they’re undergoing a national emergency. Female scientists suggest possible solutions about the threat, only to be dismissed by their male peers. Instead of fatigue-inducing, minutes-long bits of CGI chaos, we get sobering discussions on post-WWII Japan and long explanations about using Godzilla’s genetic make-up against it.

While this could be fatiguing, Anno’s decades-long experience with anime prevents it from even coming close. Dialogue is punchy, close-ups are extreme, and exposition unravels in the blink of an eye. All the information that drives the plot forward is delivered concisely and at a rapid fire pace, giving the film breathing room for more philosophical discussions at several points. Discussions about pros and cons of certain governmental structures, questioning the validity of Japan’s reduced say in global affairs, and the dubious ethicality of letting foreign bodies dictate your country’s actions in emergency situations. What’s so great about these bits of philosophizing is that Anno never posits himself as someone who has an answer to any of it. He’s merely observing, poking and prodding at the state of the world and the people who run it.

Meanwhile, the cinematography of Shin Godzilla makes even the most dialogue-heavy bits of the film visually arresting. Each shot is composed like a cel of animation—interesting stills that express mood and tone even in total silence. Action sequences feel artistically composed in their depiction, with little details like vibrating shingles on roofs or close-ups on Godzilla’s eyes interspersed between buildings collapsing. Even when the focus is on pure chaos, it never feels like the tiring, cluttered trash found in low-rent productions like Avengers: Age of Ultron or Jurassic World. Every explosion feels timed and purposeful, every fallen building an exclamation point rather than background noise. It’s been a long time since a movie made me feel what was happening on screen, but Shin Godzilla managed it with every passing minute. The final shot of the film will stick with me for years to come, as will many others.

Everything is tied together by Shiro Sagisu’s masterful score. He manages to implement musical leitmotifs throughout the entire film, something completely absent from pretty much every big-budget picture these days. A familiar rhythm, itself a callback to his work on Evangelion, beats during crucial moments, with additional instruments layered on top of it depending on the situation. The rhythm and the timing of it drives home the mood, and the additional instruments add context. Further pieces of music are direct callbacks to kaiju flicks of the 50s and 60s, giving certain moments distinct old-school flair.

There’s so much to unpack in Shin Godzilla. Its fantastic narrative, filled with interesting characters and important questions about social upheaval, governmental responsibility, and science’s role in solving natural disasters. Its beautiful cinematography, with its pitch-perfect grasp of shot composition and mise en scene. Its subdued, humanistic and deeply anti-triumphant tone. Everything in Anno’s masterpiece could have a whole essay written on it.

Yes, I did say the “m” word. Make no mistake—Shin Godzilla is very much a masterpiece, a cinematic triumph of the highest cailbre. Whatever Hollywood tells you is hot, or whatever the Academy tells you is “art,” will most likely pale in comparison to this stellar example of film craft. It’s a master class in film as an artform, and a reminder of how great the medium can be. Don’t miss it.

Exactly what you’d expect from the master, Mr. Anno, Shin Godzilla is one of the best films of the decade, and a stellar example of pushing cinema forward instead of making cheap entertainment. 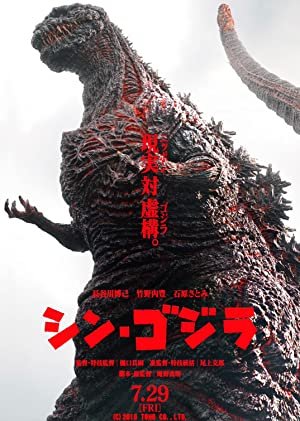