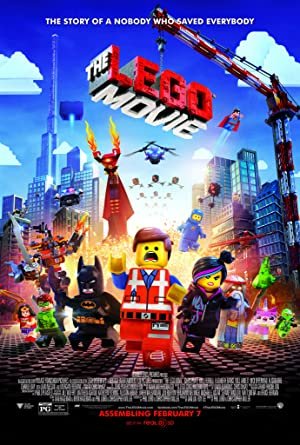 When you sit down and really think about it, Lego shouldn’t be popular anymore. The Danish building blocks were groundbreaking playthings in 1949, but in days when toddlers are picking up iPads, they should be passé. Yet, Lego’s probably more popular than ever. There are a number of reasons why: nostalgia, simplicity, cross-marketing in videogames/playsets, and most importantly the fact that those little plastic cubes that you constantly step on at the worst possible moment open up a child’s imagination through building like few other toys. As Lego continues its age-bridging, cross-cultural assault through videogames and Star Wars/Batman/Marvel/everything themed playsets, it was inevitable that someday a Lego movie would exist. It’s just too easy to sell to family audiences, amateur stop-motion Lego movies have been made for decades now, and Lego’s multiplatform franchise is made for merchandising.

Here’s the thing though: how do you make a feature-length movie about little plastic blocks. Break it down to that level and it’s an idea that shouldn’t work. Thankfully, Warner Brothers assigned the task to the two-heading filmmaking team of Phil Lord and Christopher Miller who specialize in ideas that shouldn’t work. They’ve already made a cult TV show about a high school populated with clones of historical figures (Clone High), a CGI hit with one of the worst titles of all time (Cloudy With A Chance Of Meatballs), and a feature film version of an 80s TV show few people liked in the first place (21 Jump Street). None of those projects should have worked but in the hands of Lord/Miller, they were brilliant. The Lego Movie is the closest thing the duo have had to a sensible starting point and unsurprisingly it’s not only the best thing they’ve ever done, but also the best animated film to come out of Hollywood since Pixar started phoning it in with sequels.

The plot can be cynically broken down to a cross between Toy Story and The Matrix. It’s all about Emmet Brickowski (Chris Pratt), a Lego construction worker who has posters for “A Popular Band On His Wall,” spends his days constructing buildings based on instruction books, and constantly sings the theme song of Legoland: “Everything Is Awesome.” Then one day he spots a beautiful (well, by Lego figure standards) gal named Wyldstyle (Elizabeth Banks) and inadvertently ends up fulfilling an ancient prophecy made by a Morgan Freeman-voiced Lego figure to become “The Special.”

Emmet has been chosen to be the Lego drone who will take down the evil President Business’ (Will Ferrell) plot to confine Legoland to the confines of banal conformity. Emmet must bridge the gap between all the segregated Lego worlds (including a Western land and Lego Gotham City) and bring back the open building-block creation of the age of master builders. It’s all much sillier and easier to follow than it sounds, eventually building towards a big twist that most viewers will see coming, but still offers a touching ode to the imaginative power of Lego nonetheless.

Perhaps the most fascinating thing about the Lego movie is that it is even more blatantly a commercial for the toy at the center than Transformers or Battleship and yet is an infinitely more moving and creative film than any of the toy movies that proceeded it. A big part of that is just the joy of Lego itself, a brain-building toy that has inspired generations of children to create to the point that many adults now have a full time job creating Lego pop culture replicas for the legendary toy company. Phil Lord and Christopher Miller fully understand Lego’s appeal and create a film about that subject without ever losing track of the fact that their film must first and foremost be a comedic adventure. The CGI animation brilliantly creates a low-fi feel of a stop motion Lego fan film, filled with jerky motions, blocky designs, and creative faux-stop motion effects like creating flames out of crudely animated Lego fire pieces. It’s a gorgeous movie to behold, filled with visual invention and Lord/Miller’s patented pop culture humor. With Lego tie-ins to everything from Batman to Star Wars now part of the legacy, Lord/Miller let loose their reverential and referential humor onto a world that has those qualities built into it. No one else should have made this movie and no one could have done it better.

As per usual in these blockbuster animated films the voice cast is stacked with stars like Chris Pratt, Elizabeth Banks, Will Ferrell, Charlie Day, Will Arnett, Jonah Hill, Channing Tatum, Morgan Freeman, and Will Forte. However, unlike many of these projects, Lord/Miller actually give each famous voice a character suited to their talents and not a single cameo passes by without a major laugh. Thankfully, Lord/Miller never take the easy route to cynically mock their subject matter either, filling the screen with a love for all things Lego including a character who is one of the 80s Lego astronauts that every child of a certain generation owned and even the chin strap is broken in the perfect place.

This is a big Hollywood blockbuster made by people who care about the subject matter and know just how to treat it. It’s big, adventurous, hilarious, touching, and makes you want to race out of the theater to buy as many Lego playsets as you can fit in your arms. Balancing all those elements is nearly impossible, but Lord/Miller did it with such ease that they should have a massive hit on their hands and might finally be recognized as two of the most brilliant comedic minds of their generation. Warner already has a Lego Movie sequel in the works, but hopefully Lord and Miller find another project to work on instead. It’s hard to imagine a better Lego movie being made than this, and I’m anxious to see what the next seemingly ridiculous idea that they want to turn into a brilliant comedy is instead.