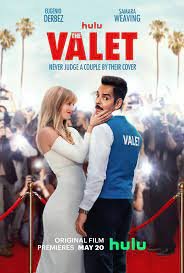 It can be hard to recapture the magic of a movie when converting the story from another language into English, but that does not stop Hollywood from trying. While a few manage to hit, such as The Ring, most lose something in the translation, resulting in sub-par copies of the original. The Valet, thankfully, avoids this trap, delivering a strong, lighthearted comedy that stands on its own, even if it does not hit the heights of the original French outing.

The story of The Valet follows Antonio (Eugenio Derbez), a kind-hearted valet working at a swanky Beverly Hills restaurant, where he truly excels at his job. He can park and drive some of the most expensive cars in the world with ease, even as he relies on his trusty bicycle to get around in his day-to-day life. Currently separated from his wife, and living at home with his mother in the Pico/Union district of Los Angeles, he is working for the best for his family, and his teenage son.

It is not until he finds himself mixed up in the affair between Vincent Royce (Max Greenfield), a real estate billionaire, and the famous actress Olivia (Samara Weaving), that his world is thrown through a loop. With the paparazzi catching the three of them on the street due to a biking accident, a plot is worked out by Vincent’s lawyer to have Antonio play the role of Olivia’s boyfriend to throw Vincent’s wife (Betsy Brandt) off the trail. Asking for a specific sum in the range of $12 000 to take on this role, the once invisible Antonio finds himself in the middle of a whirlwind of fame, money and power, the likes of which he never thought possible.

“The Valet manages to deliver a fun and heartfelt film…”

The Valet delivers a story we have seen countless times before. Seeing the fish out of water story in the lights and glamour of Hollywood is nothing new, and it has certainly been done better. But even with that in mind, the movie manages enough to make the characters feel human and endearing. Antonio, despite his bumbling ways, manages to feel like someone you want to get to know.

As he goes through his daily tasks, you can see the pride he puts into everything he does, and the true joy he gets from being around his family. This is in stark contrast to Samara Weaving’s Olivia, who is shown to be isolated, unable to make meaningful connections, even as she desperately craves them in her life.

The evolution the characters go through is also refreshing, opting not to give the obvious payoffs, giving a much more human, and relatable outcome as the characters come to terms with their failings, and how this situation has changed them for the better. The Valet also manages to endear its side stories and characters to the viewer, with the private investigator sub-plot paying off in a truly fantastic and endearing way.

Writers Rob Fisher and Rob Greenberg have managed to translate the story in a way that makes the movie stand on its own. While the original was a much more “zany” affair, opting for more laugh-out-loud moments, The Valet manages to deliver a fun and heartfelt film that dives into the characters, their struggles and how they manage to grow thanks to the encounters in the film.

Even the best story would fall flat with the wrong cast, and thankfully, The Valet delivers with actors that make the characters feel human, relatable and engaging to watch. Samara Weaving is truly fun in the role of Olivia, with Eugenio Derbez nailing the role of Antonio, bringing a level of depth I did not expect. Even the supporting cast manages to deliver with many known names from TV and film, such as John Pirruccello, Ravi Patel, Alex Fernandez, Carmen Salinas, Marisol Nichols, and Amaury Nolasco. Even in smaller roles, the cast makes the world feel fun, vibrant and exciting, even when the main cast is not on the screen.

The Valet is a fun take on a classic concept, and works well with what it is given. While the movie does nothing truly new, it manages to be a fun, and heartwarming experience that will be fun for a date night or something to throw on and unwind from the troubles of the day. With a strong cast and quick pacing, The Valet is a movie well worth watching, especially after a long day, and you need something to make your heart feel a bit more light.

While The Valet does nothing new with its premise or story, the strong cast and swift pacing makes it a fun, lighthearted outing, even if it is only skin deep.
REVIEW SCORE
7
File Under: Comedy, The Valet