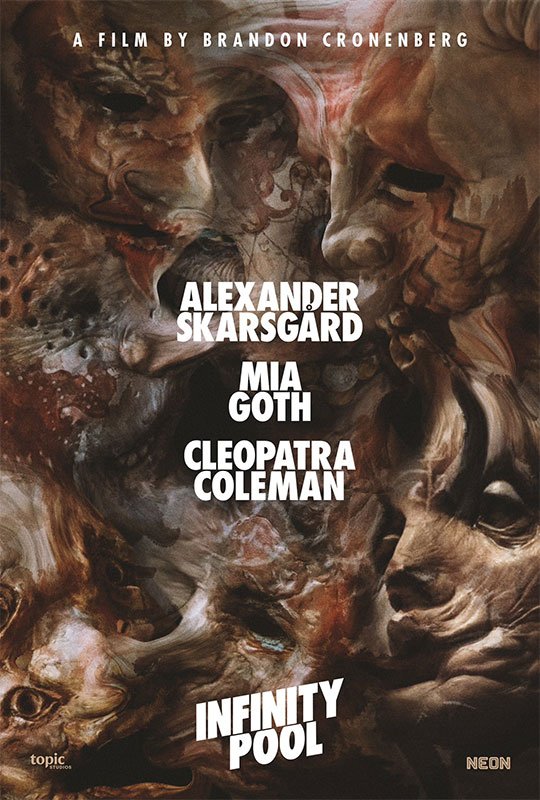 Few modern movies dive head first into the surreal as Infinity Pool, the latest film from director Brandon Cronenberg, has. Capturing the dark underbelly of the rich, along with the complex issues of morality and self, the movie is a journey into the dark recesses of people’s souls. Brought to life in a way uniquely Cronenberg, Infinity Pool is one of the hardest movies I have had to watch this year and one that fans of the genre need to experience to understand fully.

Set on the fictional island of La Tolqa, Infinity Pool takes no time to introduce the audience to James Foster (Alexander Skarsgård), an unsuccessful writer on vacation with his wife Em (Cleopatra Coleman). Early on, we are given a glimpse of the sleepwalking-like nature of both their relationship and their lives. They are drifting through their daily activities, with little bringing the spark of excitement they once knew. This is until they meet Gabi (Mia Goth) and her husband Alban (Jalil Lespert).

What starts as new exciting friends to enjoy while at the luxury resort turns horrific when a tragic accident outside the resort grounds exposes a world of hedonistic tourism, ruthless violence and surreal horrors that exist within the resort’s perverse subculture. What started as a leisurely outing to inspire a second book from James quickly turns into a journey of self-discovery, morality, and how far someone will go when faced with no consequences.

Brandon Cronenberg’s Infinity Pool is a hard film to crack, with it working against your understanding, even in its first moments. The use of angles and close-up shots, even for simple dialogue scenes, actively works to push the viewer away from relating to the characters, with them existing out of place and time, never able to get a sense of rationale behind their choices.

As a setting, La Tolqa places the audience and its characters in a constant state of unease. Although the resort is one of luxury and the island’s customs are used as selling points, it never feels as wholesome as the characters suggest. It may be something that people with money try to package, but it is also shown to be brutal, cruel and violent, with the deformed flesh masks sold in the gift shop only a hint of how twisted the world of the island really is.

“Infinity Pool dances on the edge of satire and surrealist nightmare…”

Infinity Pool dances on the edge of satire and surrealist nightmare, borrowing from classic works in the genre to tell a story that defies not only explanation but understanding. Pushing the limits on what an R-rating would allow, Brandon Cronenberg embraces violence and madness to craft a story that demands its audience question everything they see.

How Cronenberg achieved that rating, even with the level of graphic violence, sexuality and pure psychedelic images, is something I can not explain, but this is a movie that pushes limits. If you walked in thinking you would see a bit of body horror and some violence, you, my friend, are in for a surprise. Infinity Pool goes further than any of his previous works, displaying everything from transgressive sex to visceral horror and everything in between, never sparing the audience the gorry details of all the depravity you will witness.

“Infinity Pool is as thought-provoking as it is unsettling.”

Even the best surrealist nightmares need actors to bring their madness to life, and
Alexander Skarsgård was a brilliant choice as the focal point of this story. Starting as a vain author excited by praise, his descent into the hedonistic world is as believable as it is gutwrenching. Transitioning from moments of child-like vulnerability and untapped rage, he is an oddly sympathetic character, even as his actions defy any modern view of morality.

Mia Goth, on the other hand, plays the role of the morally bankrupt temptress who leads James into the forbidden and the deprived. Goth has made a career out of bringing unique women to the screen, and Gabi is no different. Willing to do anything to get what she wants, the veneer of civility quickly fades, giving a sense of the evil that lies just below the surface, relentlessly pushing James to his breaking point.

Infinity Pool is as thought-provoking as it is unsettling. While the movie starts off giving only small moments of connection with the characters, as the movie progresses into its final acts, all sense of logic, reality and sanity are thrown out the window. The artifact of civil society may be a mask that can be put on by the rich to exist outside the walls of the island and its reports, but for someone that is truly broken, it may never go back on, and the depravity experienced without consequence can never be put away.

Brandon Cronenberg masterfully brought this satirical nightmare of a horror film to life, defying narrative constructs to paint something truly unique. While not for the faint of the heart, it is a movie that needs to be seen to be understood. A complex, layered journey, Infinity Pool gives a further look at the mind that has gone too far, with each new revelation only bringing the viewer deeper into the brutal dark core waiting underneath.

With Infinity Pool, Brandon Cronenberg masterfully tells a story of morality, brutality and self-discovery in a way that only he can.
REVIEW SCORE
8
File Under: Film, Horror