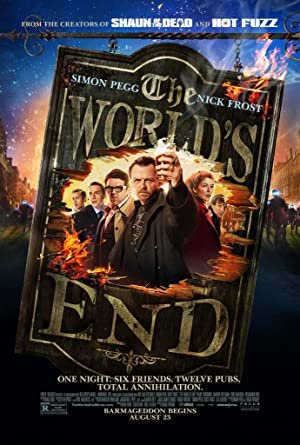 Through Spaced, Shaun Of The Dead, and Hot Fuzz this dynamic duo created a style of filmmaking unto themselves that reinvented genre parody/homage as personal storytelling. Spaced filtered twenty-something listless irresponsibility through the pop culture quotations that tend to define life at the time. Shaun Of The Dead explored the challenges of accepting 30s adulthood through the challenges of facing a zombie apocalypse. Hot Fuzz thrust stylized buddy cop comedy conventions into the genteel British village lifestyle they grew up in. And now The World’s End uses apocalyptic sci-fi horror to examine the pain of nostalgia and perils of conformity. That the movies also represent some of the finest examples of their genres in the last decade and offer some of the biggest laughs of the era makes them extra special. It’s sad to think Wright and Pegg won’t have another movie coming along any time soon, but at least they’ve gone out with a satisfying finale. It’s certainly their most mature and thoughtful effort to date, if not their most polished and already feels like one of the finest movies of the year.

Once again playing a role unlike anything he wrote for himself before, Simon Pegg stars as a deadbeat drunk and drug addict whose life peaked in high school. Specifically, things never got better than the night he and five friends did a 12-pint pub-crawl across their hometown. Of course, they never finished it, and it’s one thing that’s always bothered the character through the years of failure that followed. For no particular reason, Pegg starts showing up at his former friends’ doorstep demanding they get the gang back together for round two. Since the former buddies are played by an all-star lineup of British comedy specialists and character actors in Nick Frost, Paddy Considine, Eddie Marsan, and Martin Freeman they thankfully all agree. Soon they are back wondering the streets where they grew up for the noble goal of getting sloshed. Something’s wrong though and not just the fact that five grown men are behaving like teenagers. No, everyone in the town seems different; Invasion Of The Body Snatchers different. And so as tends to happen in Pegg/Wright joints, the movie gearshifts halfway through from character comedy to genuine genre oddity and somehow pays off all the competing styles and plot threads before the credits roll.

What’s most surprising about The World’s End is how genuinely dark and thoughtful it turned out to be. It’s still very much a comedy, and yet the weakest bits are probably the goofiest gags and one-liners. All their previous movies have been personal, yet this one really seems to resonate. As if simply by getting back together to make one more movie almost a decade after Spaced got them thinking about nostalgia and getting older, which ended up being more exciting material to the filmmakers than the movie in-jokes, fisticuffs, and decapitations. Surprisingly, it all works and is quite a strong evocation of the theme, even if it’s expressed through comedy and sci-fi horror. These guys are of course no slouch at laughs and thrills and deliver plenty (you haven’t lived until you’ve seen Pegg attempt to fight off a variety of attackers without spilling his pint). The supporting cast is stellar (especially Nick Frost, playing straight man to Pegg’s buffoon for once) and filled with cameos from almost every actor they’ve worked with over the last 14 years. As usual, the duo throw every joke and idea they have against the wall and not all of it sticks, especially the weird coda that seems to be there only to satisfy the promise of the title. But more than enough of the laughs and ideas stick to make the film work, in fact it damn well soars.

Despite checking all the boxes of expectations for a Wright/Pegg film and delivering exactly what everyone loved about Shaun Of The Dead and Hot Fuzz, there’s a nice sense of maturity here for the pair as filmmakers. Pegg ditches his bumbling nice guy comfort zone to play a genuinely annoying failure of a human being and proves to have the range as an actor to pay it off. Wright still whips up visual wonders every few seconds, but the movie doesn’t suffer from the occasional directorial overkill of his early work that often felt like an unnaturally talented fanboy trying every trick he’d loved in movies all at once and in every scene. As writers, for the first time their plot, character, themes, and emotions are more compelling than the winks and set pieces. It’s sad to think the two are splitting up for a while after this movie since they only seem to be getting better. But chances are that just means that when they reunite it will be to make something quite different since they are developing more diverse interests as their careers move on. The only downside to dialing back the excesses of their work is that at least on first viewing, The World’s End isn’t quite as breathlessly entertaining and jolting as their previous flicks. Maybe it’s one that gets better on repeat viewings or maybe it’s because they seem to be slightly losing interest in the style of filmmaking they created. Either way, this is hardly cause for concern and condemnation. The World’s End is an absolutely fabulous flick and easily the greatest horror/sci-fi/anti-nostalgia/manchild-coming-of-age/apocalyptic/personal comedy ever made. So that’s quite an achievement for the history books, if nothing else.