Transformers: Dark Of The Moon (2011) Review 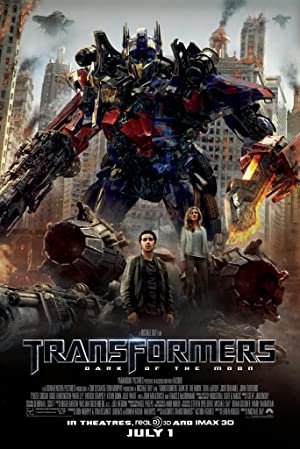 Michael Bay has become a punching bag for the critical community, and justifiably so given that his primary interest as a director seems to be fetishizing automotive and military hardware as well as ladies’ software. You’d think by now he’d want to show that he’s capable of more, particularly after the shit-kicking he took on Transformers: Revenge Of The Fallen.

Yet, while Transformers 3 is marginally better than it’s predecessor, the legion of problems with the film plays like a checklist of everything that Bay does wrong. It’s loud, stupid, and almost incomprehensible storytelling. Granted, Bay still directs large scale action sequences with few rivals and gets a couple of laughs out of his pitched-to-the-rafters brand of comedy. But is about an hour of legitimate entertainment in a 2.5 hour 3D action figure commercial enough? I don’t even know why I phrased that as a question. It’s not. Not even close.

The movie opens with a brief flashback space battle between the Autobots and Decepticons back on Cybertron and after that, it’s a full hour before we see robots fighting again. In the meantime we’re treated to Shia LaBeouf freaking out (literally screaming and raging like the Hulk) because he can’t get a job and his new impossibly hot girlfriend has a rich and attractive boss (Patrick Dempsy playing a villain, no I’m not exaggerating). LaBeouf’s new Megan Fox substitute, lingerie model Rosie Huntington-Whiteley, is introduced by Bay ass-first and acting second, which given her unbalanced talents was probably a wise decision. Since it’s hard to care about that nonsense there’s also a second plot going on involving a conspiracy revealing that NASA actually went to the moon because there was a Transformer hidden up there that is apparently the link to Megatron’s latest world domination scheme. That plot peaks with a scene between Buzz Aldrin and Optimus Prime so idiotic and misconceived that it could only have come from Bay, and it kind of has to be seen to be believed.

LaBeouf eventually gets a job working for John Malkovich (the wtf casting moment of the year) and discovers the NASA conspiracy through a nutball co-worker played by The Hangover’s Ken Jeong. Both Malkovich and Jeong are pretty funny, but their scenes feel out of place and both characters disappear so quickly that the movie probably would have been better served by being 30-minutes shorter and two actors lighter. LaBeouf then gets back to playing with his giant robots once he has the facts, teaming up with both a crazy government agent played Francis McDormand and a returning John Turturro as er…a crazy government agent. After about an hour the moon Transformer is returned and we finally get another action scene. Then Bay succinctly wraps things up with a 40 minute epic robot battle that rips Chicago to shreds and sends skydiving army officers plummeting towards the camera in 3D.

The only reason I laid out that much of the plot is because that the easiest way to criticize the story is to write out free of car commercial cinematography and movie star charm. It’s all ludicrous hokum and almost impossible to follow. Everyone involved with Transformers 2 eventually admitted that movie was terrible and they’d make up for it with the next chapter. Aside from a handful of funny moments, a massive action finale and a much appreciated absence of racist robots and close-ups of robot balls, it doesn’t seem like any lessons were learned. Admittedly, those small changes make Transformers 3 slightly better than the last sequel, but not by much. The first film in the series may have been popcorn trash, but at least it was coherent popcorn trash. The sequels, to borrow a phrase from Shakespeare, are “a tale told by an idiot, full of sound and fury, signifying nothing.”

Now, the thing is there is a lot of money to be made in the sound and fury game these days and Bay is pretty good at it. The 40-minute battle concluding this Transformers movie (and god willing, the series) is undeniably impressive. An entire city is laid to waste. A huge sequence featuring LaBeouf and co trying to escape a collapsing skyscraper and another involving a special taskforce of winged base-jumpers battling Decepticons are some of the best action scenes that a couple hundred million dollars can buy. Bay also uses 3D well, creating an immersive explosive experience and the photographic technique thankfully forces him to hold on shots for longer than a millisecond at a time, leveling off the almost incomprehensible rapid fire editing style he employed on his last few movies. That 40-minutes is worth the price of admission, but only if you can deal with the fact that you won’t give a shit about any of the characters by the time you get there. The humans are all one-note jokes and the robots are either defined by cartoony accents or a love of delivering long serious monologues about nothing (often while inexplicably walking the African plains).

Transformers: Dark Of The Moon isn’t the worst movie of the summer. That honor still falls on Pirates Of The Caribbean 4 (currently the 4th highest grossing film of all time overseas, by the way). At least Transformers has about an hour of enjoyably over-the-top character comedy and giant robot battles hidden within. Ideally there would be an option to just buy a ticket to the action finale, but unfortunately you’re going to have to sit through all the preceding garbage if you want your explosive jollies. Whether or not a sporadic hour of entertainment hidden with in a 2.5 hour mess is worth it is up to you. Just don’t forget that buying a ticket to Transformers 3 on opening weekend pretty well guarantees the existence of a Transformers 4 in a couple of years. Will you be able to live with yourself if you let that happen?

Transformers: Dark Of The Moon isnâ€™t the worst movie of the summer. That honor still falls on Pirates Of The Caribbean 4 (currently the 4th highest grossing film of all time overseas, by the way).
REVIEW SCORE
5
File Under: Alan Tudyk