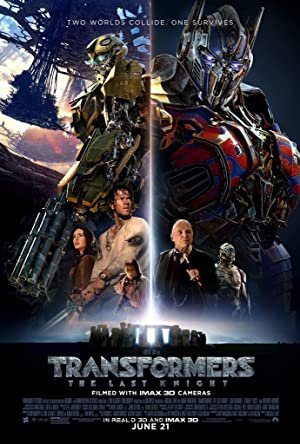 Good news! Michael Bay made another Transformers movie. For those counting at home, that’s the fifth blockbuster in this bloated toy advertising franchise. Everyone involved ran out of ideas after the first movie, yet they kept making these things anyways. It should surprise absolutely no one to learn that Transformers: The Last Knight is absolute garbage. However, the good news is that this particular garbage entry in this garbage franchise is actually rather fun. The action sequences are stunning and the rest is stunningly stupid (even stupider than previous Transformers movies and yes, that’s possible). In fact, the fivequel is downright hilarious for most of the running time. Just not on purpose, despite endless jokes (they aren’t funny or at least not intentionally funny)

If nothing else, you’ve got to give Michael Bay credit for starting the movie in the most unexpected possible place. It begins on a medieval battlefield with King Arthur and his knights of the round table getting filthy, clashing swords, and somehow blowing up a lot of stuff despite an absence of gunpowder. You’re probably wondering where the Transformers fit into all of this? Well, that’s simple. You see, it turns out that Merlin (played by Stanley Tucci for some strange reason) got all of his wizard magic from a stick given to him by Transformers. Makes sense, right? No? Well, you’d better go with it because the movie gets stupider from there!

Next we jump to modern times. Apparently Transformers are falling to earth every day and humanity is freaking out. Aside from Cuba, which is inexplicably a Transformers Haven, the big ol’ robots are constantly hunted and questioned. It seems like it might be some sort of refugee allegory for a second, but don’t worry this is still a stupid movie. In fact, Bay only uses that juicy concept to set up an action scene with a bunch of swearing kids in rubble. Isabela Moner emerges as a plucky heroine who quickly befriends Mark Wahlberg who between movies has grown from a crappy inventor into humanity’s only connection to the Transformers. From there a supermodel British professor (Laura Haddock) and a slumming Anthony Hopkins kick off a plot in England that reveals the Transformers weren’t just involved with King Arthur and his gang, but in every important event in human history. You see, they are our friends and helped everyone from Shakespeare to Stephen Hawking to further humanity. Are you following this? Nope. Well, I understand. After all, I haven’t even mentioned Optimus Prime yet, who is the centre of the franchise. He’s sent back to his home planet and is seduced into being a villain and…yep…this thing doesn’t make a lick of sense and has way too much story without forming a cohesive plot.

While previous Transformers movies managed to stretch the flimsiest of plot constructs into four bloated 2.5 hour epics, Transformers: The Last Knight squeezes in enough backstory for five movies into one. Even though the story is quite dumb and straightforward, Michael Bay and his team of exhausted screenwriters manage to make it seem as confusing and convoluted as possible. They shove all of the exposition into Anthony Hopkins’ mouth in the hopes that his British gravitas will make it sound important. That doesn’t really work. Hopkins looks either lost or like a guy goofing off for a few million dollars more than he ever expected to make last year. The script somehow combines a straightforward sequel to the last Transformers mess and an epically confusing set up for god knows how many other sequels. Watching it is like being beaten over the head with narrative as if Bay is banking on the fact that if enough story beats happen it’ll all feel big and important. Of course, that doesn’t work, but it is almost always accidentally hilarious. That works in its own way.

As per usual, the film is defined by Michael Bay’s very specific brand of cinematic overkill. Characters and objects don’t’ move, they woosh past the camera with seat-shaking sound effects. Everything is shot from at least a dozen more angles than necessary. Every action sequence goes on twice as long as it should and blows up ten times more things than a reasonable person might expect. Since he’s shooting in IMAX 3D, Bay at least tones down his patented eye straining rapid-fire editing to make the beauty shots register. It’s still hard to follow the action relative to most movies, but by Bay’s recent standards (especially in the Transformers series), it’s practically sedate. You don’t so much watch these action sequences as you do lay back and allow yourself to be pummelled by them. There’s a certain overkill ironic enjoyment to be had if you give yourself over to this colossally expensive nonsense. You can’t help but laugh when Mark Wahlberg engages in a sword fight with a 30 foot robot. That’s comedy gold, even if no one involved realized how funny it would turn out.

There’s really no sense in discussing any of the characters or performances in detail since Bay obviously didn’t care. They are all either action figures to be posed in his frames or squealing human robots used to pull laughs or emotion out of the audience through shrill overacting. Everyone on screen embarrasses themselves at least a few times. That just adds to the accidental comedy. Whether it’s the nonsensically overwritten screenplay, the ludicrously overblown action or the hysterically pitched acting, everything about Transformers: The Last Knight attacks your eyeholes and earholes at full volume. This is blockbuster filmmaking as a bludgeoning weapon pointed at the audience. In that sense, it’s definitely the Michael Bayiest entry in a franchise built on all of that human punchline of a director’s excesses.

You’ve kind of got to admire this fivequel on a certain level for how confidently it shoves hot garbage into your face and demands that you feel entertained. It’s certainly not boring, which has been a problem in at least half of the Transformers movies to date. So that’s a plus. It’s also by far the stupidest entry in a franchise defined as much by stupidity as brand synergy. On a certain level, that might make Transformers: The Last Knight the purest example of whatever the hell Michael Bay thinks he’s been accomplishing with these movies over the last decade. That’s not necessarily a good thing, but since these things keep making about a billion dollars at the box office, I guess that makes it a success for whoever the hell it is that actually likes these things other than Michael Bay or anyone else who gets a paycheque when they do well.

The latest Transformers movie is probably the stupidest and also one of the least boring entries in this garbage franchise. That makes it one of the best sequels, for better or worse.
REVIEW SCORE
5.5
File Under: Mark Wahlberg, Transformers