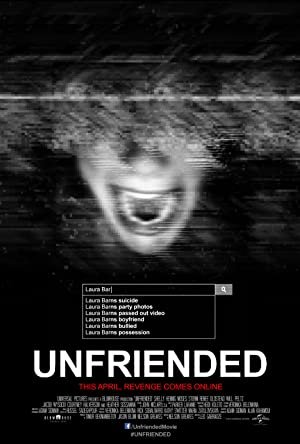 There are so many reasons why Unfriended shouldn’t work. It’s gimmicky, it all takes place on a computer screen, it trots out the old “haunted technology” chestnut yet again, and the trailer seemed to suggest it was aggressively targeting millennials for the sake of sweet dollaroos and little else. Yet, somehow the movie does work and works pretty damn well. It’s worth noting that this is not the work of Universal Studios continuing their streak of decidedly “meh” found footage flicks. Nope, this one was actually made independently by writer Nelson Greaves and director Levan Gabriadze. It played the film festival circuit a bit last year as Cybernatural, before Jason Blum (the man who found Paranormal Activity and created Blumhouse) picked it up and convinced Universal Studios to slide it onto screens nationwide. It’s easy to see why. Quite apart from being an easily marketable property, it’s also damn good little horror movie and one that even has something to say amidst all the genre silliness.

So in case you weren’t yet aware, the unique selling point of Unfriended is that the entire movie takes place on a laptop screen. That computer belongs to Blaire (Shelley Henning), a teen who kicks off the movie by watching an internet video of her former best friend Laura Barns killing herself after a round of cyberbullying following an embarrassing, drunken YouTube video. Soon after, her boyfriend (Moses Jacob Storm) Skypes her up for a little PG-13 sexy tomfoolery before a collection of their friends join the conversation at the absolute worst moment (ain’t it always the way?). They all giggle and gaggle a bit before noticing that there’s a faceless extra person in their chat named “billie227.” They can’t remove the culprit from the chat. Soon billie227 claims to be the ghost of Laura Barns and even starts contacting everyone through Laura’s old facebook account. That was all creepy enough, but then billie227 starts posting embarrassing photos all over their walls and tells them all that if anyone leaves the chat, they’ll die. Trouble is that even when the kids stay on Skype, they have a tendency to die as well.

One would think that a movie set entirely on a computer screen would be a bit too dull and limited, but it’s amazing all of the tricks that the filmmakers pull to ensure that it’s not.

One would think that a movie set entirely on a computer screen would be a bit too dull and limited, but it’s amazing all of the tricks that Greaves and Gabriadz pull to ensure that it’s not. Essentially, you’ll watch five frightened faces simultaneously in real time (with digital glitches cleverly used to mask cuts). The soundtrack comes from a Spotify playlist. A slow download status bar is used as a vehicle for suspense. Web windows pop up to explain any dangling mystery necessary so that the plot can keep racing forward. Characters have secret text conversations aside from the big one. It’s kind of amazing how many opportunities the structural device provides rather than limitations. The best scares are purely situational, mysterious messages and unexpected software bugs that the filmmakers never have to explain. We’re all so used to the programs being used that it’s creepy simply not to see a familiar comfort like a “reply” button. When the kills and ghostly shenanigans arrive, they are effectively and tastefully handled with some damn fine performances from the cast all around (even if they are playing John Hughes teen stereotypes). However, the ghost and gore are undeniably the least compelling part of the movie. We’ve all seen that stuff before, even if it’s done well. It’s everything around the ghost that makes Unfriended such an interesting little flick.

Beyond how genuinely tense and intense this terse little horror yarn feels while racing through 82 minutes, Unfriended is also one of those rare genre flicks with something to say. There’s the surface level cyber bullying content, which is certainly a timely and relevant twist on teeny bopper murder movies. However, beyond that the movie exposes the troubling dependency that these characters, teens at large, and frankly the whole damn world has on digital technology. It’s not particularly jarring to watch the entire movie play out on a computer screen, because that’s where most of us spend the bulk of our lives now anyways. There’s a duplicity to so many of these communication devices that the film exploits for both supernatural and human horror that’s kind of fascinating. By transforming a computer, social media, and Skype into a scare factory, the filmmakers have tapped into something primal and contemporary not unlike when John Carpenter first showed the world how frightening the suburbs could be in Halloween.

Of course, it’s not all spooks outs and big ideas in Unfriended. The movie is above all else an entertainment factory, so Greaves and Gabriadz have as much fun with their concept as possible. There are hilarious sequences like a character desperately seeking help on a Chatroulette-style program only to find dick pics, the Universal logo appears to chug through blocky pixels like a bootleg file, or a throw away background window of bittorrent that’s surreal to see in a studio release (if there are sequels, don’t be surprise if that turns out to be the cause of the haunting, not the bullying). The movie is an absolute blast. Sure, there are some leaps in logic, thinly drawn characters, and predictable plot beats, but no more than any other mainstream horror flick. Greaves and Gabriadz delivered a genuinely innovative and impressive indie genre effort that genuinely earns the studio platform and release that it’s gotten. This thing deserves to be a hit and possibly even inspire sequels, even if it’s also paradoxically the first horror movie ever made that will likely play best on a laptop.

So in case you weren’t yet aware, the unique selling point of Unfriended is that the entire movie takes place on a laptop screen.
REVIEW SCORE
8
File Under: Facebook, Horror, Indie Game