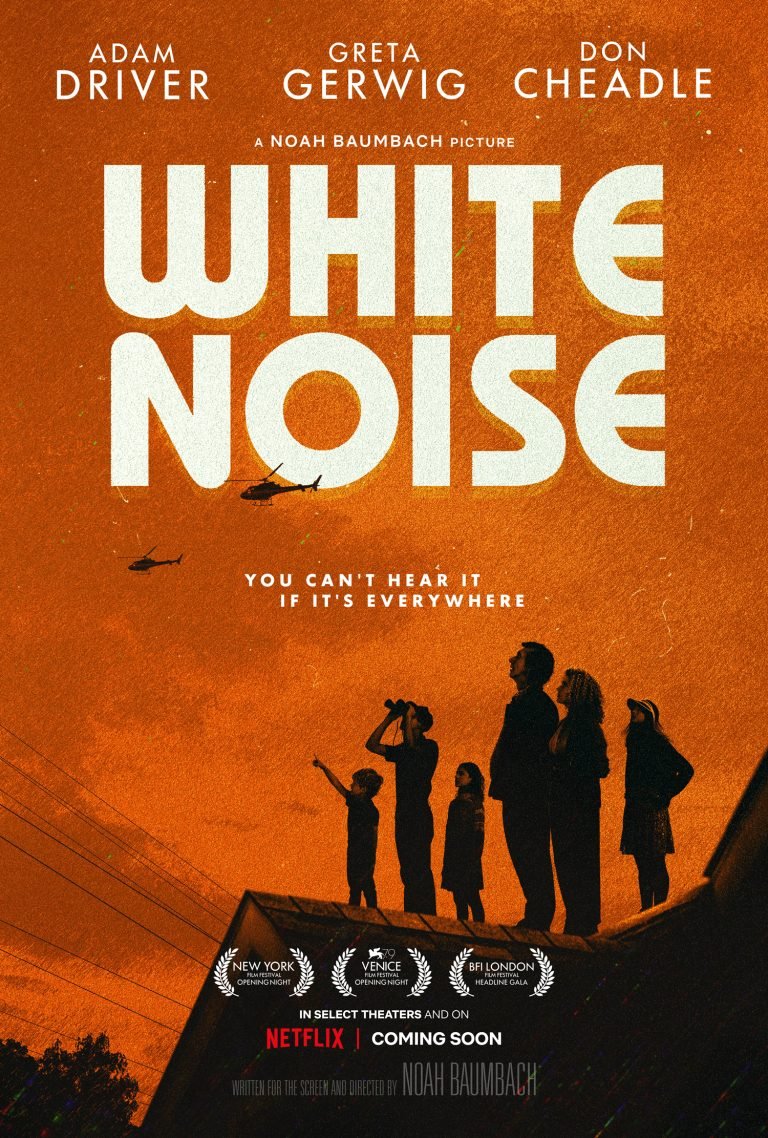 At its core, White Noise is a story of the fear of death, the phenomenon of the midlife crisis, and…general fear. Its protagonists will grate, and the plot is all over the place. In fact, it’s best if you read the original (clearer and more impactful) 1985 story because Noah Baumbach’s fever dream of a screenplay likely won’t have the same impact.

Taking place in the mid-80s, White Noise opens with a pompous Hitler studies professor (Adam Driver), who has been through multiple marriages and has a full house as a result. A secret pill prescription and a toxic chemical cloud throw a wrench in things (to say more would venture into spoiler country), but all of it funnels back into a tale of relationships and the journey of life.

The myriad kids exhibit all sorts of endearing, innocent, and quirky qualities not unlike the auras of Little Miss Sunshine or Captain Fantastic: and frankly, they’re often the best part of the film. The always fantastic Greta Gerwig plays his cheery yet exasperated wife; who, along with Driver, are the cornerstone of the great performances in this project. Driver and Gerwig have palpable chemistry together in the film, much to the chagrin of pretty much everyone else in it.

“To put it bluntly, White Noise attempts to juggle almost every emotion known to humankind.”

To put it bluntly, White Noise attempts to juggle almost every emotion known to humankind. Jealousy, rage, masculinity, innocence, and fear: it’s all juggled on the head of a pin, and vomited back out in a way that makes sense to Baumbach. Many of the changes from the novel don’t serve the 2022 version (particularly a climactic moment that alters the core message), and the rapid editing makes things harder to parse.

There are flashes of brilliance here. Monologues that are sound and fury signifying nothing are often the point and shine a spotlight on how these characters (and humans as a whole) are extreme versions of the human race living their lives, and attempting to make some sort of mark before they die.

Much of the fault lies within the reality that a postmodern classic doesn’t quite hit the same in 2022 as it did in 1985. Baumbach makes an admirable attempt to get all his ducks in a row here, but the clearly comedic moments don’t always hit, leaving the cast to flail and try their best to make things work.

With a tighter script and less of a focus on visual absurdism, there’s a much better film lurking beneath 2022’s White Noise. The cast rises to the occasion, but the humour (which is highly played up) frequently falls flat, and the whirlwind of events that are packed into the two-hour and change narrative never really come together to fulfill a cohesive vision.

Putting White Noise to film is a tough task: and one that maybe should have spent a little more time in the oven.
REVIEW SCORE
5
File Under: Netflix