Sea Fever TIFF 2019 Interview: The Terrors of the Sea 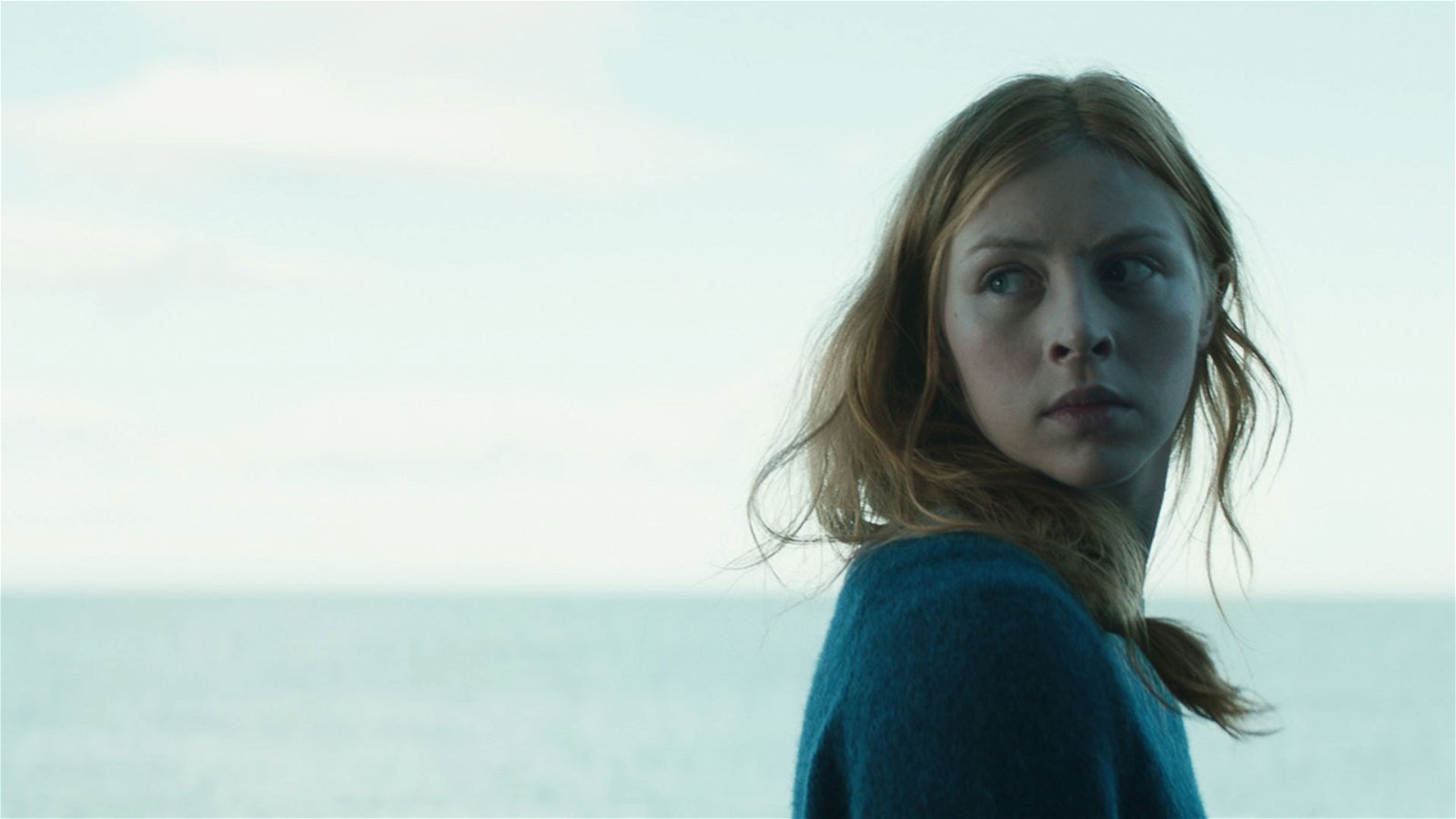 The ocean is a wondrous place, filled with possibilities. It feels endless, with depths most humans cannot even comprehend.

It is within this setting that Neasa Hardiman set her new film, Sea Fever, a down to earth story that focuses on a crew as they uncover something unknowable, awe-inspiring, and utterly terrifying.

At TIFF 2019, early in the festival, CGMagazine had the chance to sit down with Neasa Hardiman to dive into what went into Sea Fever. As we sat there with our morning tea, she went into detail about the process of making this riveting film. From the troubles, genesis, and ultimately bringing the concept to life, Hardiman provides a new light to the events of the film, and what people should expect when they sit down to watch Sea Fever.

CGMagazine: I would love to start off by talking about how the visual style for Sea Fever came together?

Neasa Hardiman: I’m a designer by training, so I’m very interested in visual storytelling, I’m very interested in image composition. I feel like it’s a banal thing to say but, at their root movies are the visuals. Of course, soundscape is crucial, of course, performance is crucial, of course, you can’t make film without those things. We are visual animals, and there’s something delicious for us, in a well-constructed image—so that was the fun of it.

Then the cinematographer is an Irish guy, his background is quite similar to mine. We both started out in Ireland, we both had an art school background, and we both moved over to the UK to work in high-end TV, and then to work in the US on high-end TV. I sort of knew him from around for a long time, but we hadn’t actually worked together. When I sat down with him, and we spoke, it was like, “Oh, yes, brilliant. This is brilliant. This guy totally is on the same page in terms of you know, every considered image.”

CGMagazine: I’d like to talk about the realism of this fantastical story, and how you captured that raw, real feeling within the movie.

Neasa Hardiman: I feel like for this kind of storytelling, if you’re going to tell a story that has this big metaphor at the heart of it, it’s going to live or die on how real we as viewers find that. So everything around that metaphor, everything around that kind of cinematic dreamlike element has to feel completely rooted and authentic and grubby and real. Because otherwise, I don’t think an audience will buy it, and it’s hard to suspend your disbelief.

CGMagazine: I very much agree. This movie felt like it could be happening somewhere in the real world. You captured this world that feels lived in, even the fishing boat and crew had a foot firmly planted in reality.

Neasa Hardiman: you’re absolutely right, and they did. I had the idea of the story, and I had a rough draft and I thought, “Okay, for the reasons you just talked about. I really need to get somebody to make this feel real.” I know a little bit about it and part of my family comes from the west coast so I was aware of those issues and what faces those people, but I needed somebody who would educate me. I found it with this absolutely brilliant woman who runs a boat out of the west coast of Ireland. It’s a family boat, and it’s that boat you see in the movie. It belonged to her father, and she inherited it and her brother runs it with her. They run it with exactly that kind of crew you see in the movie. It’s this really tight-knit, incredibly transnational crew that has its roots in a very traditional lifestyle and world. The boat is, I think, 40-years-old, and it’s made of iron and wood. They live on it, and it’s a really rough life. She was really helpful in terms of teaching me about the world, teaching me about what the rituals and routines are on a boat, how it works, why it works, what they do.

She explained to me just how much a community everyone in the area is. It’s a wonderful transnational community and it’s really traditional. There’s something kind of lovely about that, especially now. When everybody is getting all uptight about border controls and my group, your group and never the twain shall meet and all that, that there is a community operating off the western seaboard of Europe or North Africa, on the eastern side of the Atlantic. They are family to one another, and they’re friends and neighbours, and they worship slightly different gods but they all know each other and they all hang out together and they feel very bonded to one another.

CGMagazine: Regarding the design of the crew, they feel lived in and have a look that is unique but connected to the world. How did you and your team craft these people?

Neasa Hardiman: Well, obviously, the costume designer and the makeup designer were huge in that, and as a writer and director, what you do is you go, “This is what I believe to be true about the story.” Not control them too tightly but say, “These are the things that are important. This is what the story is, this is how the story works.” Then those people come back to you with this fantastic blossoming of ideas. I have to say the really great thing was that those actors engaged deeply and fully with makeup and costume and built those characters from the socks up—the scarring, the tattoos, all of that stuff. They have stories to tell you about every single one of those, like the rootedness that they brought those characters was just delicious.

They all have their own deeply inhabited lives. Ardalan Esmaili was going, “We know he loves his wife, and we know that they had a really hard time leaving Syria. I’m not going to tell that story. But we know it’s true. So he’s got a tattoo with her name, and it is because she lives here. She lives in the back of my mind.”

CGMagazine: Everyone worked to create these characters it seems.

Neasa Hardiman: Yeah. So they infused all those people with life. It’s a bit like that old cliché of the tip of the iceberg—you have to know what’s under the surface in order to shape that little bit that hits the top. You have to have all that information like we have to know what happened to the family, how did they lose their child, how long has that child been gone? What’s happened to them since that child? And I have a really long and detailed exchange with both of them separately and together about how that relationship changed and what happened and how Jared moved from a position of being very responsible to be more gambler after the death of his child. And this is where we find him and kind of the paradox of his own story at that final moment.

CGMagazine: It was brilliantly crafted, this felt like a universe I wanted to be a part of.

Neasa Hardiman:  That’s really kind of you, I am delighted you felt that way. That’s great!

CGMagazine: Because this is a horror film, I do want to quickly touch on the creature and how the concept for it came to be?

Neasa Hardiman: Sea Fever has a central metaphor, which is a dream-like metaphor of this animal. So there were two things in play. First of all, it was really important to see exactly what you’re talking about, so that it feels rooted, authentic, and truthful—it can’t feel whimsical. Every single aspect of that creature exists in nature, at every step of the life cycle. The way that the creature reproduces, how quickly it grows, all of those things exist in nature, I didn’t make any of that up. What I did do was combine it. There isn’t an animal exactly like that, but there could be is the point.

That was really important about it, that it had authenticity and that I could talk through the life cycle from beginning to end and know that it made sense and that it was unified and that it had an existence that was plausible. Then on the other side of that, there’s the kind of aesthetic sensibility of saying, “Okay, so it’s rooted and grounded, but it also has to live on a metaphorical level.” I knew at the beginning that I wanted it to be beautiful. We’ve all seen that monster that opens your mouth in ten different ways, and it’s covered in glycerin and the body horror things. But I wanted to infuse this vision within that it would be beautiful, that it would be something awe-inspiring and big and frightening and unknowable, but also kind of mesmeric, and something that you wanted to keep looking at. Not that you want to look away from.

CGMagazine: I feel you mixed up the formula for this sort of movie, while you do call back to films like The Thing, you do it in a different, more human way. The creature feels part of nature, and less of a force of destruction, was this always the intent?

Neasa Hardiman: I think that’s the important thing, right? And the other thing that I really wanted to do was get away from this kind of third act problem of chase, fight, chase, fight, die. Because I’m not doing that, we’re not having final confrontation as the third act. That’s not what this film is about. The third act has to take responsibility. What have you done? How did you get here? How did it get here? How do you—with the fact that you are potentially the more intelligent species—protect rather than destroy, and that was really important to me that that was how that story ended.

The theme of taking responsibility builds in the third act, from the moment of realizing that it’s in the tank, and it’s not about killing us, it’s about getting it back to where it lives because you have no right to kill something like that. The final act of taking responsibility and acting on the things she has been telling others to do, she fully embraces herself and is ready to make that sacrifice herself in a way that fits with her being an incredibly moral person and that’s what makes her the hero.

CGMagazine: It was fantastic. I don’t want to take any more of your time and thank you so much. Is there anything else you want to for the audience to take away?

Neasa Hardiman: There was something that somebody asked in the Q & A and I thought it was a great question. I didn’t answer it for long and you just touched on it. They’re going, “The design of the animal…How did that work?” And it is that that idea of unknowability that I was trying to get at, to make something that is circular but you can’t see the central. Something unknowable, you’re never going to really know because you can’t, but that it has this beauty and it has a unity and that we reflect the idea of vision and the eye and what’s knowable, what’s seeable, in this animal. That’s both embracing and terrifying.