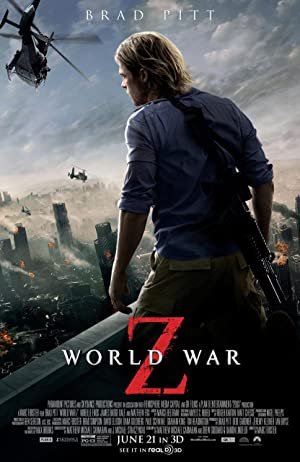 There was a time when zombie movies had an underground charm.

A subgenre that presented horror at its nastiest and most socially conscious, nimbly weaving together the grottiest of gore scenes with the most radical of social commentary (courtesy of perpetual cult icon Mr. George A Romero). However, somewhere in the mid-2000s zombies went mainstream. Dressing up like a rotting corpses became a family-friendly weekend activity, while the shuffling undead picked up high-speed sprinting powers all the way to box office topping, TV-ratings slaying, and video game selling success. Hey, it happens. Virtually everything cool and niche hits mass appeal someday. The good news is that type of success can’t last forever and in the almost unforgivably crappy summer blockbuster World War Z, we may have finally witnessed the low point of watered down mainstream zombie entertainment. It’s a sad n’ boring two hours to sit through for long time zombie fans who can quote Return Of The LivingDead more easily than they can remember the names of their children. However, the silver lining is that when something this dreadful and whitewashed comes along, it hopefully signals the beginning of the end for the mainstream bastardization of something niche. It’s hard to imagine a more watered down treatment of zombies than this dull Brad Pitt Vs. Zombies globe-trotting adventure, so at least the subgenre can only get better from here.

Based on the best seller by Mel Brooks’ son Max, World War Z could have followed the book’s structure to create a faux documentary account of a zombie outbreak. By adapting the prose journalism structure of survivor interviews into mockumentary, this could have been a found footage film on a global scale. The filmmakers could have taken full advantage of their blockbuster budget and resources to create small stories weaved into a massive backdrop and deliver an original movie out of fan favourite novel. Well, would’a, could’a, should’a… What actually happened is that Hollywood cranked out a tiresomely safe zombie movie with blockbuster production values. This is the first time anyone actually had the resources to show the full worldwide implications of a zombie apocalypse and while the scale is there along with a handful of decent set pieces and ideas, the result is just another dull Brad Pitt action movie only this time with zombies.

Pitt stars as a normal suburban Dad (which no superstar can ever pull off credibly) whose pancake breakfast with his perfect family is rudely interrupted when zombies take over the world. D’oh! Soon he’s dodging corpses with his kids and struggling to find supplies as Philadelphia is overrun by the sprinting dead. The good news is that he also used to be a super-spy for the UN, so he’s able to get himself and his family airlifted out to a super-secret UN base on a boat in the middle of the ocean. These few hundred survivors are humanity’s only hope to fight the epidemic. Pitt agrees to head out into the field to try and discover the cause and a cure for the outbreak in exchange for the UN keeping his family safe. It’s pretty lazy action movie plotting conceived as an excuse to cram in a few more stories from the book as Pitt travels to Israel, fights off zombies on a plane, and eventually discovers the cure despite having no scientific background (he figures it out simply because some guy told him an evocative sentence about curing diseases one time). Yeah, it’s pretty dumb, but that’s not even the problem. Dumb is fine in genre movie land. The ultimate sin this blockbuster horror movie (a genre with precious few examples) commits is being painfully dull.

A few weeks ago M. Night Shyamalan somehow made a 90-minute sci-fi chase movie feel like a slog, and here Marc Forster drains all of the fun out of a zombie apocalypse. Forster’s movie is nowhere near as boring as After Earth, but it is similarly thoroughly and unnecessarily joyless. Sure, the apocalypse is a bummer, but zombie movies should be fun. However, Forster fearlessly denies audiences everything they love about zombie movies, much like he did with Bond in Quantum Of Solace. Do you like the gore and violence the genre has been based around since Dawn Of The Dead? Well, get ready for a PG-13 movie where all of the blood is spilled off screen. Enjoy when filmmakers use zombies to thematically explore the weaknesses in human nature? None of that here, even though the film takes zombies to Israel for the first time and ignores all of the obvious possibilities inherent in that setting. Do you like the humor and fun of zombie movies? Well, get ready for a movie featuring a Brad Pitt performance limited entirely to looking sad that ensures the audience will get no pleasure out of his adventures. And most of all, I hope you don’t plan on actually seeing anything that happens. Forster shoots in a mix of shaky-cam, underexposure, and soft focus that makes it virtually impossible to see the action. Throw in some of the worst post-conversion 3D ever forced on a movie and at times you can’t even tell which blurry face belongs to Brad Pitt. Considering the fact that he has one of the most famous faces on the planet, making him unrecognizable is actually quite an achievement. From now on, this movie should be handed out to filmmakers as an example of absolutely everything that should be avoided in a proper 3D conversion.

Now, there are a few minor highlights amidst the towering inferno of flaming dog poo that is World War Z (just enough for After Earth to retain its title as the worst summer movie of 2013). There are a handful of impressive images of massive zombies swarms combining into a collective entity and that is a terrifying visual no filmmaker could ever afford to depict before. There is also a genuinely thrilling sequence of zombies taking over an airplane and a handful of interesting additions to zombie mythology like a creative cure concept and an amusing way of distinguishing between running and shuffling zombies. However, these are but minor moments of joy in a well of brooding garbage and most of them can be attributed to the original book rather than anything the filmmakers created. I suppose this pathetic result should have been predictable after a production that involved endless delays, high profile firings, a budget that spiraled wildly out of control, and a director so out-of-his-depth that he didn’t even know what he wanted his zombies to look like a week before shooting. However, with source material this strong and a budget above and beyond any zombie movie before, there was always the hope that Forster, Pitt, and co. would deliver something special. Instead, we’ve all been treated to possibly the worst zombie movie ever made and certainly the most boring. Let’s just hope it bombs quickly and we can all pretend that it never happened. Kind of like a government agency covering up a zombie outbreak in one of the entries in this genre that is actually worth watching.

Let’s just hope it bombs quickly and we can all pretend that it never happened. Kind of like a government agency covering up a zombie outbreak in one of the entries in this genre that is actually worth watching.
REVIEW SCORE
3
File Under: