We’ve entered an era where superhero and zombie films aren’t just novelties: they’re entire genres. They’re transcended the boundaries of “action” and “horror” respectively to become their own thing, with multiple creators pushing the envelope of what those genres can actually mean. Select superhero and zombie films often eschew action in the name of isolating the various nuances of the human condition: a virtue Project Power merely flirts with, but never achieves.

Project Power starts small and benefits from the more intimate nature of its premise: a pill that can give people their own unique superpowers for five minutes. We have the mysterious “Major,” a do-gooder cop and a young dealer in-over-her-head serving as our heroes, all fighting for a place in this crazy world. In reality, it takes over an hour for our trio (Jamie Foxx, Joseph Gordon-Levitt and Dominique Fishback respectively) to actually come together. Everything before that is entertaining table-setting of how the drug works and how it’s distributed.

The three leads are so very clearly the best part, as Foxx and Fishback are a treat together as a buddy-duo, with Gordon-Levitt injecting some levity when needed as the third wheel. For the better part of an hour, that’s what we get: witnessing them deal with the lower-key insanity the drug created. But beyond that, the film loses sight of the premise. Where everything starts to really crumble is when the script shifts to focus on a laughably bad “evil organization” overarching subplot.

The actors put in charge of that side of the circus just aren’t up to par with the natural chemistry of the leads;  instead of providing overly campy mustache-twirling performances that clash with the otherwise carefree aforementioned trio. It just isn’t satisfying to watch a boring villain “pitch” the power pills to a boring crowd like it’s a big deal. Show us, don’t tell us.

The idea that someone only needs to survive five minutes in a fight with a “super” is pretty intriguing, especially for an action film: as is the concept that these powers usually come with a price. Yet, Amazon’s recent television adaptation of The Boys (in which normal people take on “supers”) upstages Project Power in nearly every way. A lot of the blame can be placed squarely on hokey low-budget CGI and a lack of compelling threats the core cast can go up against.

If Project Power was just centred on the three leads and nothing else, it could have been a tighter film that balances the fleeting nature of power and the imbalance it can create within society. Perhaps it would have made a great miniseries if they could have locked down the same talent. Instead, it devolves into another (albeit entertaining) schlocky action romp that somehow feels rushed and overlong at the same time.

Project Power has a decent premise, but like several other Netflix originals, squanders it with a meandering and bloated script. 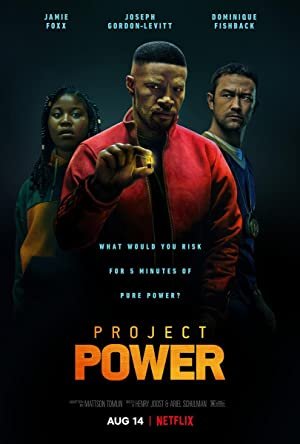