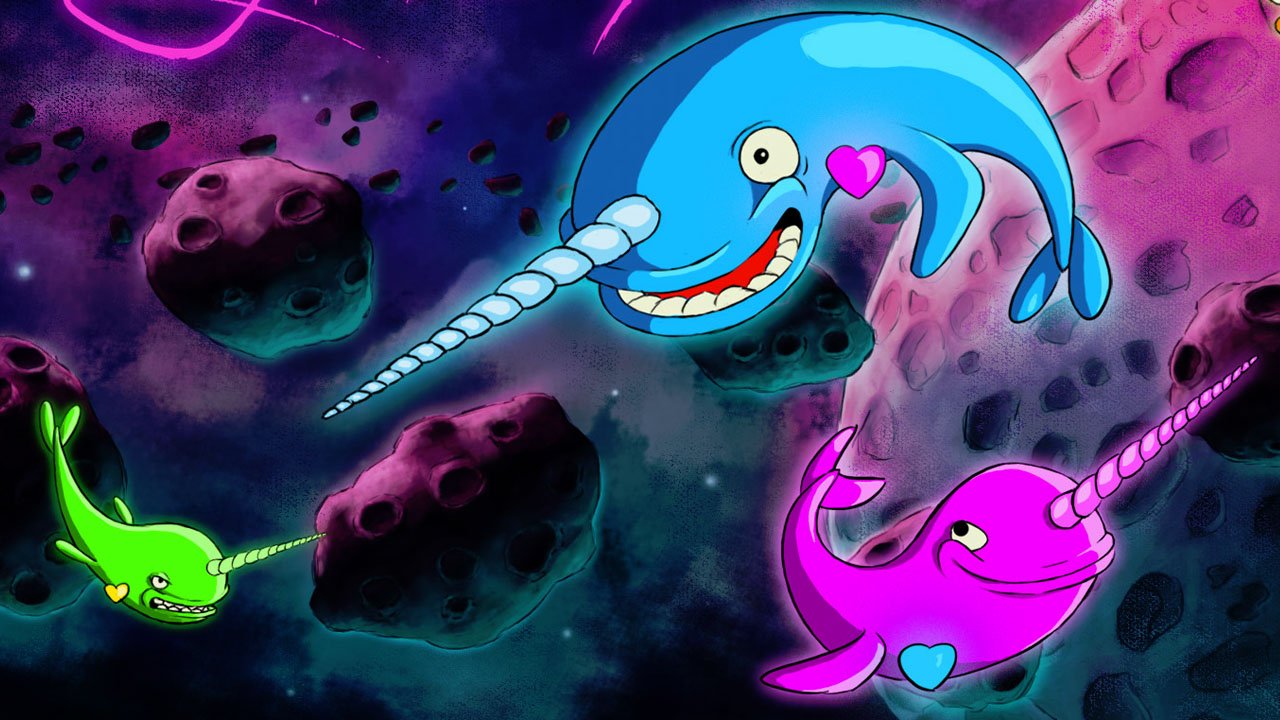 Xbox One gamers still have a lengthy wait before Rocket League (the “It-Game” of 2015) finally graces their console next February, but thanks to the mad geniuses at Breakfall we have a contender that will likely be keeping us occupied in addictive, short bursts until then.  Long-time readers who may remember our first encounter with Starwhal (a.k.a. Starwhal: Just the Tip) back at Gamercamp 2013 already know that this indie title’s journey to the consoles has been long in coming, having already graced PCs over a year ago via Steam.  However, its tongue-in-cheek humor, cheesy 80s-inspired audio-visual aesthetics and easy-to-learn, tricky-to-master gameplay has not grown stale at all in the interim.

In this 1-4 player couch-versus/couch co-op arena title, each player controls a space-faring narwhal whose glass-like heart has become completely exposed on the surface of its underbelly (clearly the result of centuries of haphazard evolution).  While these “starwhals” have grown incredibly resilient to the ravages of time and the vacuum of space, with no humans around any longer to hunt them the species has become violently bent on bringing about its own extinction, honing their needle-sharp tusks and fast-swimming bodies into the deadly, heart-skewering weapons they were destined to be.   If you’re still having trouble conjuring up an image of what this game is offers, think of the graceful sport of fencing, the momentum-meets-propulsion, anti-grav gameplay of Asteroids, and the desperate flip-flopping of a goldfish on the floor after you’ve overturned its fishbowl.  Toss all that into a blender, set it to puree, and you have the delicious sea-salty smoothie that is Starwhal.   Don’t be surprised if the concoction (or whatever you’re actually choosing to drink while playing) sprays up through your nose several times during a fit of laughter, because this game’s brand of competitive play will have you and your friends chortling in minutes as you battle to be the Last Starwhal Swimming.

In Starwhal’s main “Versus” mode, players achieve points and ultimately victory by striking their opponents’ only weak spot (their hearts) with their tusks until they shatter (the default number of strikes a starwhal’s heart can withstand before death is five), or until the timer runs out, in which case the winner will be the player with the most points scored and/or the least hits taken.  Starwhals are unable to yaw left or right or swim backwards, so in order to merely swim in the opposite direction of the one they are facing means that they must swim on their backs, leaving the exposed hearts on their underbellies wide open for assault.  Consequently, every move a player makes in relation to his or her opponents is a delightfully tense and chaotic game of risk and reward, as an attack on a seemingly vulnerable foe is just as likely to expose one’s own weak spot to the others. Raising the stakes even higher, by default Starwhal momentarily slows down time whenever a starwhal’s tusk comes within close proximity of another’s heart, giving attackers the opportunity to fine-tune their weapon’s trajectory and their targets the chance to parry and/or riposte.  The result is an endless supply of ballet-like skirmishes, squeal-inducing close shaves and victory dance-worthy triumphs that will have players abusing the “Share” and “Xbox Record That” buttons on their controllers while they talk smack and/or agonize over their defeat.  And the epic fails are just as hilariously fascinating to watch as the wins.  In any given match players can expect to see starwhals hurtle menacingly towards each other only to collide harmlessly like the Three Stooges in a doorway, or watch the action awkwardly grind to a halt as one starwhal pathetically hugs the floor to protect its last remaining heart while the others pin it down with their tusks, each waiting for the other to make a move (and take a risk).  Death is by far the most embarrassing and inglorious for a starwhal however, as the instant its heart receives a fatal strike its body shatters into whale chunks and fades amid a groan of apathy.

In addition to Versus mode, Starwhal offers three others that shake up its main concept: Score Attack (where heart energy is infinite and the highest number of heart strikes wins the day), Zones (where players battle to touch and/or defend multiple nodes in the arena for the longest period of time) and Heart Throb (a game of reverse tag where the starwhal that spends the most time in possession of the heart wins).  As starwhals can’t be killed in these modes it is potentially easier for players to exploit the system by turtling, but clever stage design and random environmental variables in every mode help to throw all players off their game and level the playing field a bit.  For example, one stage resembles the inside of a washing machine and spins against the flow of battle.  Another has barriers in the centre that repel starwhals on touch and side tubes with strong currents that suck them in from one area and spit them out in another, both disrupting and accelerating player’s momentum.  Some stages have walls that constantly shift, widening and/or narrowing the gameplay space, others have heart-gobbling lava pits, and some will even fill up with giant space gumballs that the starwhals will have to swim through in order to get at each other.  There are 26 of these bizarre stages spread across five fictional planets that players can individually choose to battle in, but adventurous players will be best served by selecting “Random Mode” to keep things fresh, as no one will know what stage or which obstacles they’ll be facing until the match has already started.  The only constants are an overabundance of “laser grid” visuals adorned by what can only be described as bad 80’s sci-fi art (think bad NES videogame box art) and a thumping soundtrack that falls refreshingly in-between retro and modern techno.   If the worlds of Far Cry: Blood Dragon and Kung Fury were real, Starwhal is a game you’d find at the front of their local arcades; it looks, sounds and plays the part.  That said, in a nod to more modern games like Rocket League, players can dress-up their starwhal with a large assortment of headgear and clothes to better distinguish their bloodthirsty porpoise on the battlefield.  This reviewer’s personal favorites are a familiar-looking medieval helmet called “Sunbro” that makes an obvious wink at a popular Dark Souls covenant and a “beam” modification that replaces the default starwhal tusk with a lightsaber.

At $12 CAD, Starwhal’s price of admission on the consoles might seem a bit steep initially.  It’s considerably cheaper on Steam (then again, what multi-platform game isn’t), and on a visual and technical level, it’s no Rocket League, but in the end that’s probably a good thing.  Ultimately, Starwhal is meant to be enjoyed on the couch with three of your friends, with only one shared screen to worry about, simple controls that are easy to pick up, and fast, frenetic gameplay that can be enjoyed over and over.  In this regard, Starwhal is right on target.

Ultimately, Starwhal is meant to be enjoyed on the couch with three of your friends, with only one shared screen to worry about, simple controls that are easy to pick up, and fast, frenetic gameplay that can be enjoyed over and over.