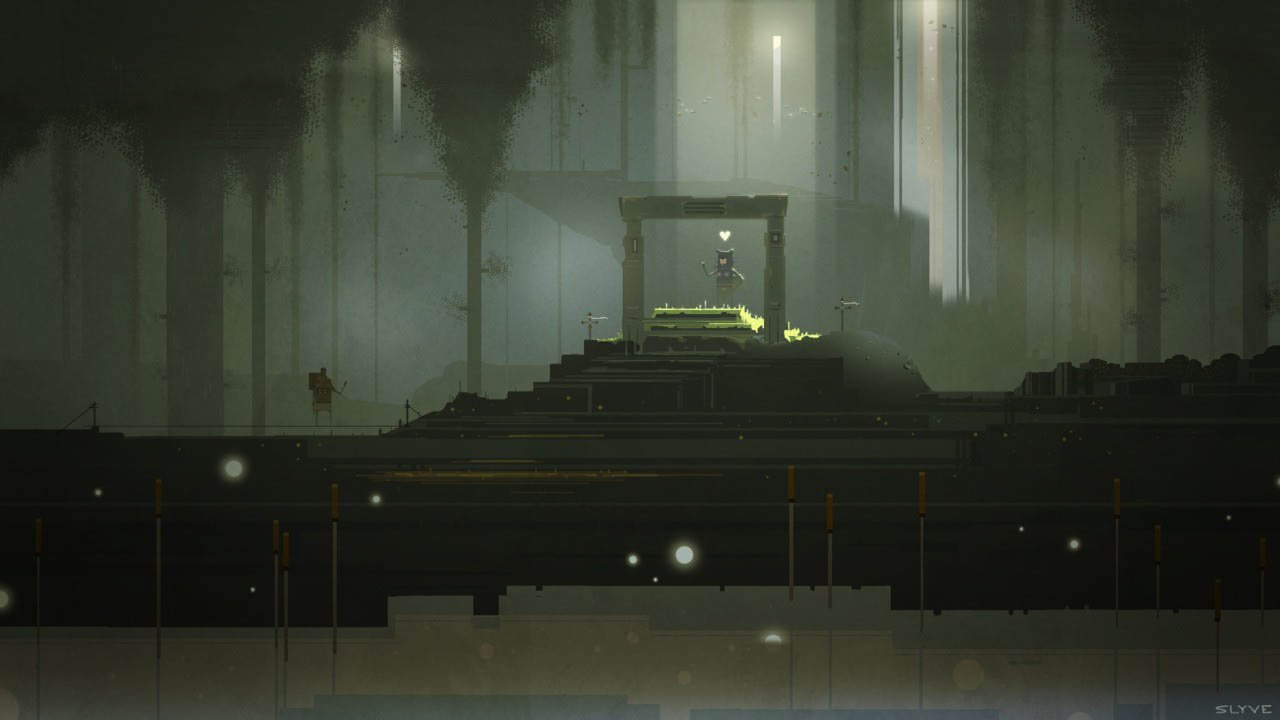 Touchtronic Neuroses And Other Tales

There is a moment in Superbrothers: Sword & Sworcery EP where you finally understand that what is being asked of you is nothing at all. It is when you complete one of the early main objectives in the game and are told “We got the Gold Trigon. We are so awesome,” that it becomes clear S&S EP doesn’t want you to be smart, skilled or mature. It just wants you to do what games have always wanted people to do; indulge in the spirit of play.

If Robert Hamburger—of Real Ultimate Power ninja website fame—had been a real child during the 80s and given carte blanche to make an adventure game on a touch sensitive Atari 800XL, complete with a couple of daisy chains to a 1979 Unitra turntable and a Yamaha DX-7, Superbrothers: Sword & Sworcery EP might have been the result. The story is about a warrior woman known as the Scythian who has been tasked with reassembling the mystical Trigon Trifecta. Like all 80s adventure games, it meanders into some weird places from there, but that’s all you really need to know.

From a presentation point of view, this is one of the more unique offerings of the year. Taking a low-fi, retro approach that Craig Adams—one of the lead creators—is known for, S&S EP is almost entirely reductive pixel art. It’s the ultimate expression of what mid-80s game developers might have accomplished if the power of consoles and PCs hadn’t inevitably grown. The environments and people are all technically simple, on the verge of being something even the most basic cellular phone could reproduce, but pushed to the limits within that framework in a way few people have imagined. The sound takes a slightly different direction, still embracing a rough, rich low-fi approach, but not limiting itself to just retro-console audio effects. Juno nominated indie rocker Jim Guthrie composed music that nods reverentially at chip tunes while still sliding over to a twangy guitar and garage band drum beat when you least expect it. Aesthetically, S&S EP is one of the most unique offerings seen in games in a long time. And will probably pick up some nominations for art direction in the indie scene at the very least. For gamers, it’s a welcome break for the constant assault of photorealism in graphics and sound. For the hipster community, it’s one of those things you’ll want to have playing on your iPad when you “accidentally” leave it sitting in an ideal viewable position for the entire café to see so they realize how unconsciously cool you are.

Superbrothers: Sword & Sworcery EP is for quite a few people, but those people are not the majority. If you’re the type of gamer that thinks games consist entirely of first person shooters or sports games that are meant to be released on an annual basis, this is not the game for you. S&S EP is part adventure game, part Punch Out, part Zelda with a small dash of Shadow of the Colossus and whole lot of Out of This World, tied up with an umbilical cord to social networking gimmick du jour, Twitter. There are small hiccups, however. During review the game froze once and necessitated a reboot and sometimes the touch sensitive elements lacked precision, but those small blemishes aside, the game plays as intended.

The primary mode of play is with the iPad oriented horizontally. Here, players move from screen to screen, solving puzzles adventure game style, only instead of pointing and clicking to interact with people and objects, it’s touching, swiping, rubbing and poking. Occasionally this adventuring is broken up by combat that asks players to orient the iPad vertically for some simple, Punch-Out style combat. As objectives within the game are fulfilled the option to tweet those objectives on Twitter is made available for everyone to see. That’s about the entirety of the game mechanically, and while it doesn’t seem like a lot, at 2-4 hours of playtime, it doesn’t need to be. S&S EP manages to keep things fresh by avoiding too much repetition and ending before the mechanics start to feel old. That’s mostly because the game, like its obvious influence, Erich Chahi’s Out of This World (or Another World as it was known in Europe) is more about exploration and experience than about scores and achievement. S&S EP does not want to challenge or frustrate players, it wants them to move along and discover the next piece of music, comedy, puzzle solving or just plain weird moment that lurks over in the next screen.

The game might even be called an exploration of gaming culture in one sense. It is self-aware, it is referential, it asks players to get in on the joke and share it with others. The use of the iPad to solve puzzles certainly adds novelty to the experience, but the real enjoyment of the game comes from a combination of how much you like gaming and how much you know about it and popular culture. Everything from the iconic Triforce of Zelda lore to Real 2 Reel jokes are invoked, with the 4th wall being gleefully broken in ways that pay homage to Hideo Kojima and his Metal Gear ways. Some have used Superbrothers: Sword & Sworcery EP as a rallying point for all that is “wrong” with mainstream gaming, citing its originality and small team as a defiant flipping of the finger to corporations and a declaration of war against popular entertainment. But in truth, rather than a criticism of popular gaming, S&S EP feels more like a celebration of it, and the entertainment it has brought to many people—and obviously the creators—over the years.

Superbrothers: Sword & Sorcery EP is ultimately a rich, lovingly handcrafted effort by knowledgeable gamers for knowledgeable gamers. Anyone can dive right in and enjoy the simplicity of its gameplay, and thanks to its “tweet-ability” it’s certainly friendly for the digital social networking crowd. But the most insight, entertainment and sheer fun are saved for those that love gaming and know it as well as the creators. At $5, it’s easy to recommend to anyone because the price is right, the actual lifespan of play goes well beyond the 5 minute mindset of “traditional” mobile gaming apps, and there are already plans for updates to keep new things sneaking into the game over time. Anyone with an iPad or iPhone would be hard pressed to find a more whimsical, original title to play, and gamers with a fondness for their own subculture will find it both funny and substantial.

Superbrothers: Sword & Sworcery EP is for quite a few people, but those people are not the majority.