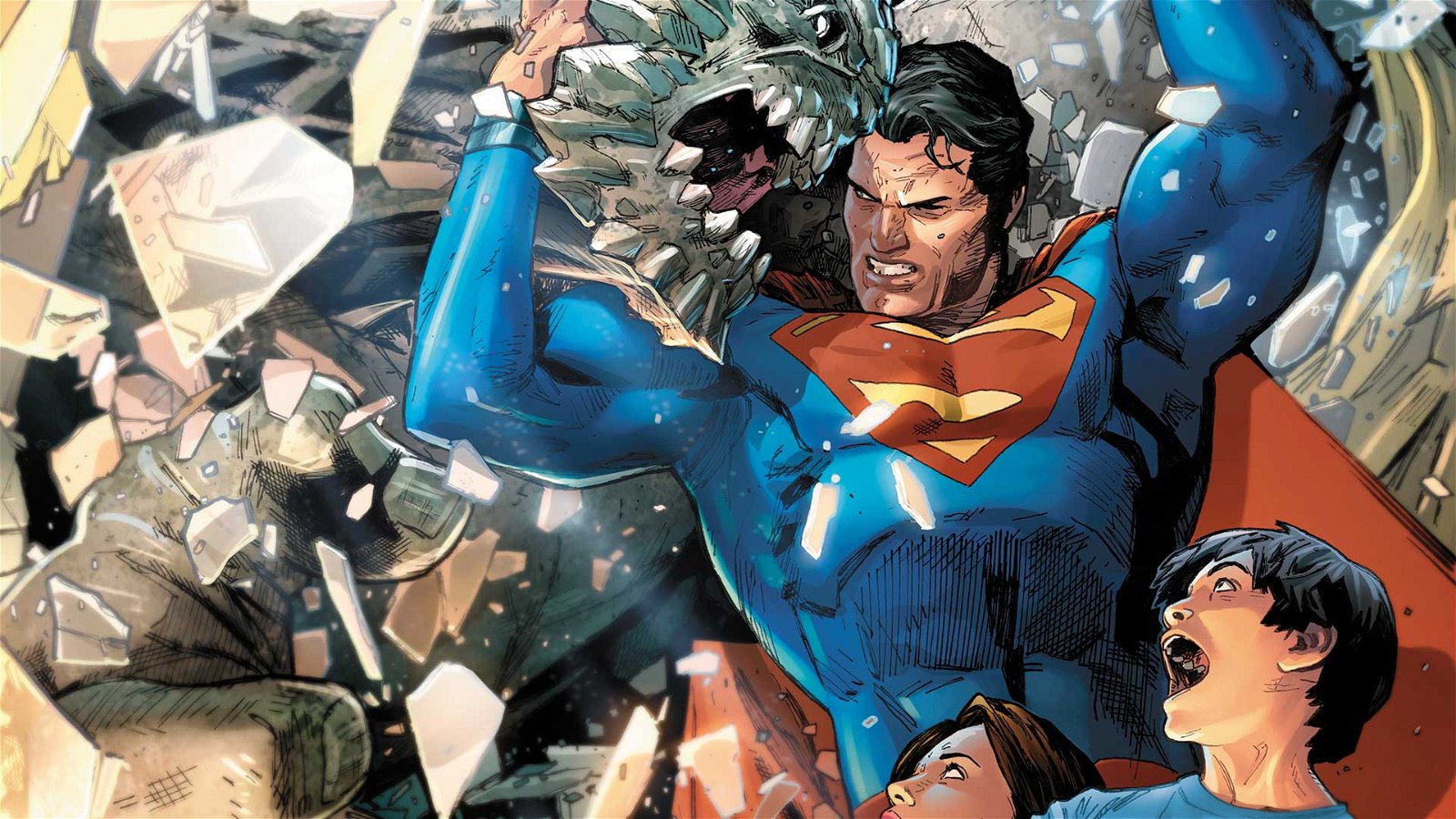 That menace is none other than Doomsday.

As Path of Doom begins,  a hostage situation is underway. However, it isn’t Superman who flies in to the rescue – it’s his long time arch-nemesis, Lex Luthor. The antagonist has created a pretty cool suit for himself, one that flies, shoots lasers, can regenerate itself, and has Superman’s insignia on its chest. Lex is now the self-proclaimed savior of Metropolis. At the end of DC’s New 52 run, the Superman in that world died.

But with Rebirth, there is another Superman. He’s been a do-gooder in hiding. Yet seeing Lex having his day in the sun as the new Superman of Metropolis is too much for him. He is the older version of Superman, the pre-New 52 Superman – the one who died at the hands of Doomsday and then returned from the dead.

How he’s back, we don’t know. How it all makes sense, this reviewer doesn’t really care. Superman’s back, and that’s all that really matters. Heck, there’s even a Clark Kent, albeit one that doesn’t have any superpowers. Hopefully, though, all will be revealed and we’ll understand how all this confusion came to be.

But again, it’s Superman. It doesn’t really matter if things are in shambles right now.

In Path of Doom, Superman returns with his classic blue and red uniform to confront Lex. But while working out their differences, someone has taken something rather large from aforementioned hostage situation. That is Doomsday and he wants nothing more than to destroy our favourite Kryptonian. Unfortunately for Superman, that means going after his family – his wife Lois Lane and his son.

Writer Dan Jurgens does a wonderful job weaving in this confusing cast of characters (soap operas have nothing on DC Comics right now) and nonstop action. From the first panels until the final splash page of Path of Doom, readers are barraged with a titanic battle – one that brings in not only Luthor into the fray but also Wonder Woman. All are needed for Superman to wage war against Doomsday. The only drawback is the storyline is that it lasts about one issue too long. It is such an action-heavy series that this reader felt some fatigue, needing the pace to slow down in order to not feel sheer exhaustion in the last few issues.

The artwork is shared by three illustrators – Patrick Zircher, Tyler Kirkham and Stephen Segovia. All do a bang-up job, but Zircher’s style resonated most with this reviewer. Their shared vision brings the six issue battle to life, giving those of us reading The Death of Superman comic in 1992 a gift. In that year, Superman and Doomsday only went toe-to-toe in one issue. Here we get to see them pound one another over six issues – a true treat.

In the end, Path of Doom is a guilty pleasure. Being the first story arc for Superman Action Comics Rebirth, it punches its way into fans hearts. There is no subtlety with Path of Doom. It’s all action, all the time. Looks like DC took the title Action Comics quite literally this time.

Luckily, we’re all the better for it.

Superman Action Comics: Path of Doom is offers a high-octane start to the Superman Rebirth storyline. And bringing Doomsday back – priceless.