Betrayal at House on the Hill: Widow’s Walk – Board Game Review 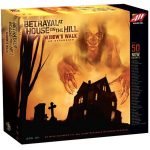 If you like Betrayal at House on the Hill, you’ll love the Widow’s Walk expansion, which adds a lot more of the same while fixing some of the original game’s weaknesses. If you don’t like the original, though, then this probably won’t do much to change your mind. It’s much less like one of the Settlers of Catan add-ons, which significantly alter the gameplay, and much more like a Munchkin expansion pack, where you’re just getting more of what you’re used to.

To recap for those who might not have played the original, in Betrayal at House on the Hill, three to six players start out by selecting characters with slightly different sets of stats (Might, Speed, Knowledge, and Sanity). They then set about exploring a house with three floors (ground, upper, and basement). The floor tiles are stacked in a deck and revealed only as characters enter them. Depending on which room is revealed, the character that discovered it might undergo an event, find an item, or encounter an omen. Eventually, once a certain condition is met, a scenario called a haunt is revealed. This turns one of the players into a traitor, whose goal is to defeat the rest of the players, who are now the heroes. It’s a relatively quick game where a lot of the fun is simply in seeing what happens, with some of the haunt scenarios winding up a bit ridiculous and others turning out to be fairly balanced races between the traitor and the heroes to see which side wins.

The Widow’s Walk expansion comes with 50 more haunts, exactly as many as came with the original game. Given that a lot of the fun of Betrayal at House on the Hill lies in encountering new scenarios for the first time, this is a big selling point. Under the expansion’s default rule set, all of the haunts from both the original and the expansion are available each game. However, if you just want to experience new content, you can use an alternate haunt selection rule set to ensure you get an expansion one.

Widow’s Walk also adds a new floor, the Roof, and assorted tiles for all floors. These tiles have two features that greatly enhance the original game: first, many of the expansion tiles have dumbwaiter icons on them. These allow you to travel from the room with the dumbwaiter to one of the landings above or below you (at the cost of an extra movement point), which makes moving between floors much easier. It also makes exploring the house a lot faster. Especially in six-player games, you can rapidly cover the entire table with a sprawling, oddly constructed house that must surely be envisioned as passing through a fourth dimension to remain architecturally sound.

Second, many of the Widow’s Walk expansion rooms offer a once-per-game-per-character power up option for one of your four stats. As a result, characters are much more likely to end up with stats near the top of their meter. It’s just so gratifying to see your character growing more powerful as they explore, not to mention the fun of potentially playing a twelve-year-old kid with a might and knowledge of seven, wielding dynamite in one hand and a revolver in the other, who’s altogether more terrifying than any eldritch horror unfortunate enough to encounter him. The expansion also comes with character tokens, which can be used to indicate which characters have already used a room’s power, to avoid confusion as the game progresses.

The Widow’s Walk expansion does have a few weaknesses. Betrayal at House on the Hill‘s randomized haunt system has always brought with it the risk that a scenario will start out utterly lopsided, to the point that it is simply unwinnable by either the traitor or the heroes. Having some characters particularly bulked up by the extra power-up rooms and everyone likely to be much more spread out across sprawling floors makes this problem worse. It doesn’t help that the haunts I played all seemed optimized for five-to-six players, which was fine when I was playing with four or five other people, but less fun when I was playing in smaller groups.

I was also disappointed by the lack of any extra characters to play as. I know that this is because the characters are little more than groups of four numbers, and the existing twelve options cover pretty much all of the balanced stat options that wouldn’t be immediately game-breaking. Still, flavour counts for something, right? I wouldn’t have minded characters with the same stats but different pictures, flavour texts, and plastic figures.

Still, these are ultimately minor complaints. Betrayal at House on the Hill is an extremely entertaining and addictive game, and Widow’s Walk expands on what works while finding ways to make the gameplay even more fun.

If you still like Betrayal at House on the Hill, you'll love the Widow's Walk expansion, which adds a lot more of the same while fixing some of the original game's weaknesses.
REVIEW SCORE
8.5
Buy Online
File Under: Board Game