Out of my League 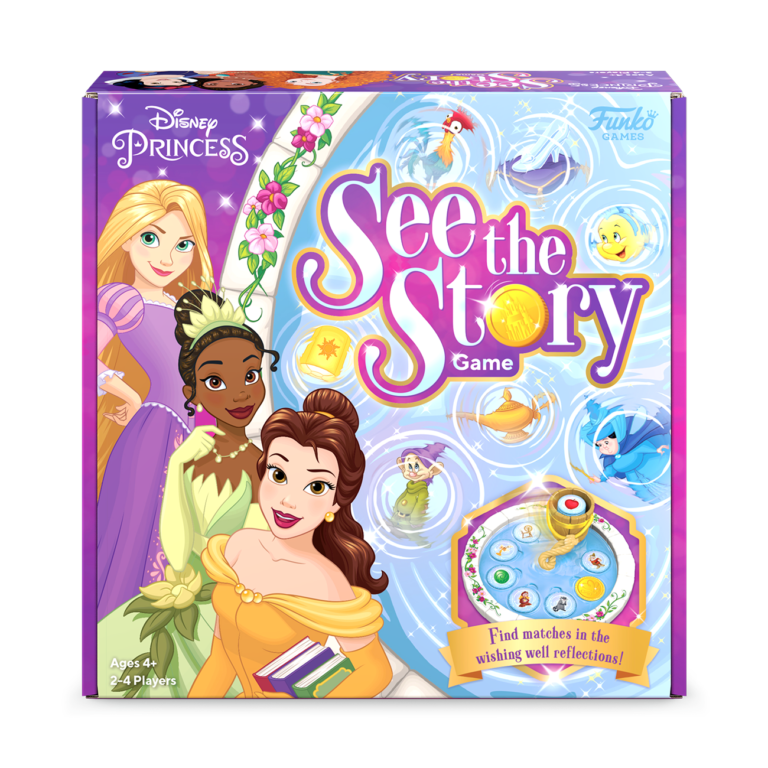 As a woman in my thirties, I grew up with Disney, Aladdin and Jasmine are my #couplegoals and I’m a sucker for any talking animals I can find. I thought I’d be a shoo-in to crush my six-year-old in Disney Princess See the Story Game, but it turns out Funko wants me to do about 25 years of research before I’m ready.

“I felt nostalgic while we put the game together, sharing some of my favourite memories with my children, teaching them about some of the movies that I grew up with.”

Unboxing the game, it comes in pieces that are pretty easy to set up. You need to pop multiple cardboard coins into their plastic rings for safe keeping, and surprisingly my kiddo loved this job. Once you do it the first time, the game is set to go, so setup and tear-down are pretty easy jobs, which is something I weigh heavily when getting into a game just before bedtime.

The board was colourful and full of all the familiar Disney characters and items you would expect. Unfortunately, throughout the game the bucket often got stuck in the wishing well and didn’t drop coins, so we would have to fiddle a bit here and there to make it work. Not a giant issue, but one that quickly had my six-year-old frustrated.

I felt nostalgic while we put the game together, sharing some of my favourite memories with my children, teaching them about some of the movies that I grew up with. Today, I cannot convince my son to sit through Beauty and the Beast, but I can convince him to sit down and play a board game that brings with it competition and a race against the other players.

Once the game is ready to go, it becomes a bit of a mix between bingo and a matching game. One at a time each player drops a coin into the bucket and spins it around the board, dropping chips into the indented spots in the wishing well. Then it’s a rush to find two pictures that are a part of the same Disney Princess story, and whoever calls out a match first gets to take one piece of the matching pair and put it onto their Disney Princess Board, covering the correct princess, with the goal of getting 4 in a row first.

It sounds pretty simple, right? You’d think so, but we were lost. If you intend to master this game right out of the gate, you had better brush up on your Disney trivia. The game is playable if you don’t have all the answers, but it makes it more of a guessing game for the first several rounds which makes it really hard for the kids to stand a chance at winning, even when I’m trying my hardest to let them.

After a few rounds, we became more familiar with the items from each movie, though we are still nowhere close to experts. We were able to pick up the pace and race to find a pair a little more quickly which kept my children’s attention a lot more efficiently. We decided to forego the four in a row and fill our cards, making the game last a little longer each round. It’s nice to have that option depending on our kids’ attention spans that day.

“…a game we enjoyed as a family, but along the way we had to write some of our own rules…”

I found Disney Princess See the Story to be a game we enjoyed as a family, but along the way we had to write some of our own rules and the flow of the game was interrupted by confusion on occasion. Having to stop and check the instructions or look on the page to see what items matched with which Princess slowed down momentum, and often had my children distracted, wanting to look at the matches before they called one out.

Perhaps if the game had been more of a traditional matching game—meaning two of the same coin—mixed with bingo, the gameplay would have been a lot more fluid, especially for children as young as four. Also, the games’ play style could include other characters and movies, not just relating to Princesses in a bright pink box. Though my son knows better than to say “pink is for girls”, that doesn’t mean he isn’t more interested in Cars or Toy Story rather than Cinderella or Sleeping Beauty.

“I don’t think that Disney Princess See the Story is a game that will be a part of our regular weekly board game rotation.”

The game was playable and enjoyable once we dove in, but I feel as time goes by we will forget which items go with which movie and will have to go back through the trouble of getting used to it all again. Once the game gets going it is fun and exciting, and also allows a lot of flexibility in how long you choose to play and adjusting the rules to the ages of your children. Though I believe we will play it again, I don’t think that Disney Princess See the Story is a game that will be a part of our regular weekly board game rotation.

Disney Princess See the Story Is a Game That Expects a Lot from the Memory of a Four-year-old—and Mom and Dad. but Once the Game Gets Rolling and You Become More Comfortable With the Pieces, it Becomes a Fun Family Game for All Ages.
REVIEW SCORE
7
File Under: Board Game, Disney