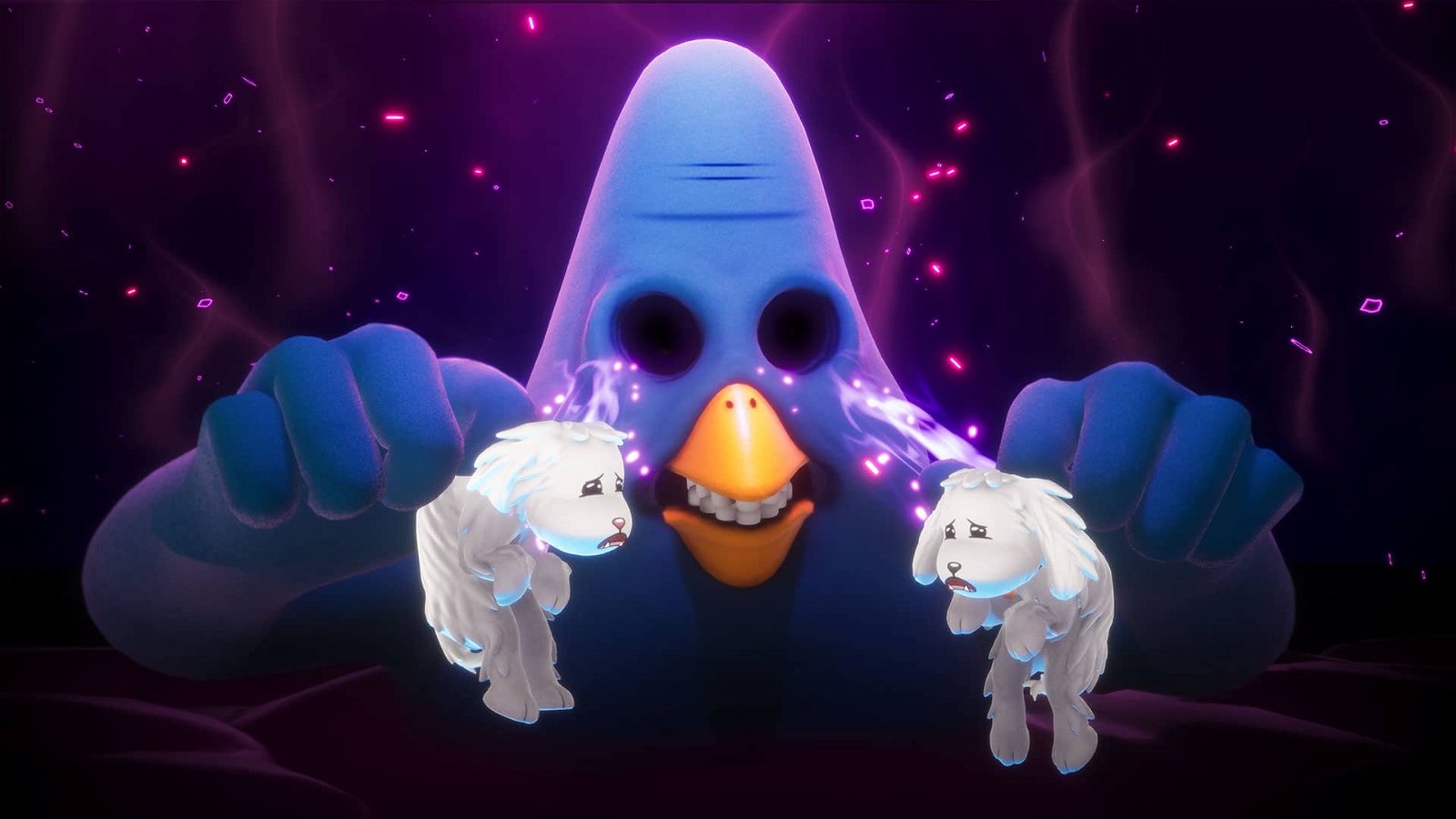 It’s not going to surprise anyone that you’d have to enjoy the humour of Justin Roiland if you want to enjoy Trover Saves the Universe. The game plays a bit like a six-to-eight hour episode of Rick & Morty, taking players on a journey filled with bizarre events, twisted humour, and sickening moments. If that sounds good to you, you’ll likely enjoy this, but if you wanted anything more from this title, you might walk away a little disappointed.

Your dogs have been kidnapped and stuck into the eye sockets of the sinister Glorkon, a powerful alien being that intends to use their powers to do nasty things to the cosmos. Like, some really gross stuff. As a Chairorpean, you can’t really get around much, as you’re confined to your seat. It’s just how things are for your alien race. Luckily, Trover has been sent to help you out a bit, and your new chatterbox pal with babies for eyes will get you through things with few problems.

You can control Trover from wherever you happen to be seated, using him to move to warp nodes on each map to keep you close to him. Trover’s journey will be a lot harder than yours, as he’ll have to platform around wild planets, as well as fight Glorkon clones using a beam sword. These little alien beasts will attempt to beat poor Trover down, using various types of armour and weapons to do so.

Mashing the attack button is pretty much all you need to do when these guys show up, and that never really changes throughout Trover Saves the Universe. Some Glorkon clones do wear armour, but leaping over them and attacking from behind is all you need to do. You can also pick up and throw things found in the environment using some later-game powers, but it’s usually easiest to just swing away and reposition periodically. It gets very dull very fast.

Exploration doesn’t really offer anything much more exciting, either. You will find yourself on some varied alien worlds, but save for some weird eyeball plants in a forest world, or some out-of-place suburban homes on a fortress planet, things tend to be pretty uninteresting. Worlds of clouds, or the sickening planet of meat-like parts are fun to explore for a few moments, but kind of feel like they’re just odd setpieces slapped together. Looking at them in VR doesn’t help. The almost-absent music also doesn’t help, with notes lifelessly pouring from your speakers.

You’re encouraged to look around for hidden Power Babies as you move through each planet, though. Getting enough of these will increase your health (and each has a unique description), as well as unlock an extremely underwhelming prize when you get them all. I wasn’t expecting something major for getting all of them, but for the amount of work you have to do to get all of them, it can be a real let-down.

Trover Saves the Universe has some limited puzzle solving (despite showing some funny contempt for puzzles at the start). You’ll be moving blocks around with levitating powers, throwing items at buttons, and figuring out a few odd situations. It never gets all that complicated, which is nice in a way as you never get stuck, but again, doesn’t really capture my interest as I play.

Just about everything about Trover Saves the Universe is as average as can be, leaving characters and dialogue to carry player interest throughout the entire game. The wild aliens you’ll meet throughout the game do a good job of adding some excitement to moving forward, as it’s hard to predict who they are and how they’ll act.

Except…a lot of them are very, VERY annoying. Some of the Glorkons can be pretty silly, and the occasional character is often on the amusing side, but a great deal of the side characters are the equivalent of nails on a chalkboard. You have to help these aggravating folks for large swaths of the game, and every moment spent with them is irritating. I bristled at the idea of interacting with them again while going back to old stages to look for missing Power Babies. At least you can kill some of the uninteresting ones.

Which leaves the dialogue of Trover and a few characters to save the day. Roiland, presumably, was simply locked in a voice over studio for a few days and told to tell a story, which was then shaped into the game we have before us, as Roiland’s varied voices form the majority of the game’s dialogue. So, if you love Roiland’s sense of humour, this is where the game will shine, showcasing that same oddball silliness and toilet humour that infuses his work.

That said, listening to these jokes over a long game can wear a person down and make some otherwise silly moments fall flat. Trover Saves the Universe is best experienced in small doses if you want the jokes to land, as anything else makes the humour feel repetitive. There are some truly funny moments that never fail to shine, but this stuff can easily wear thin. Especially just staying stuff about poop and butts. Also unsurprising, the humour can get offensive. If you know Roiland’s humor, don’t expect anything different here. Your enjoyment of Roiland’s Rick & Morty humour will directly tie into how much you enjoy Trover Saves the Universe. It is average in every single other regard, offering simple combat, dull alien worlds, and straightforward puzzles. In its characters, it can sometimes be amusing, but often sticks you with downright irritating people. Only Roiland’s humor and dialogue carries this game, and unless that’s the sort of thing you already like a lot, even that will wear out, leaving you with a game that will amuse fans but few others. When it’s funny, it’s VERY funny, but these limited moments are just not enough to carry the whole game.

When Trover Saves the Universe is funny, it’s VERY funny, but its humor is just not enough to carry such an average, unspectacular game.