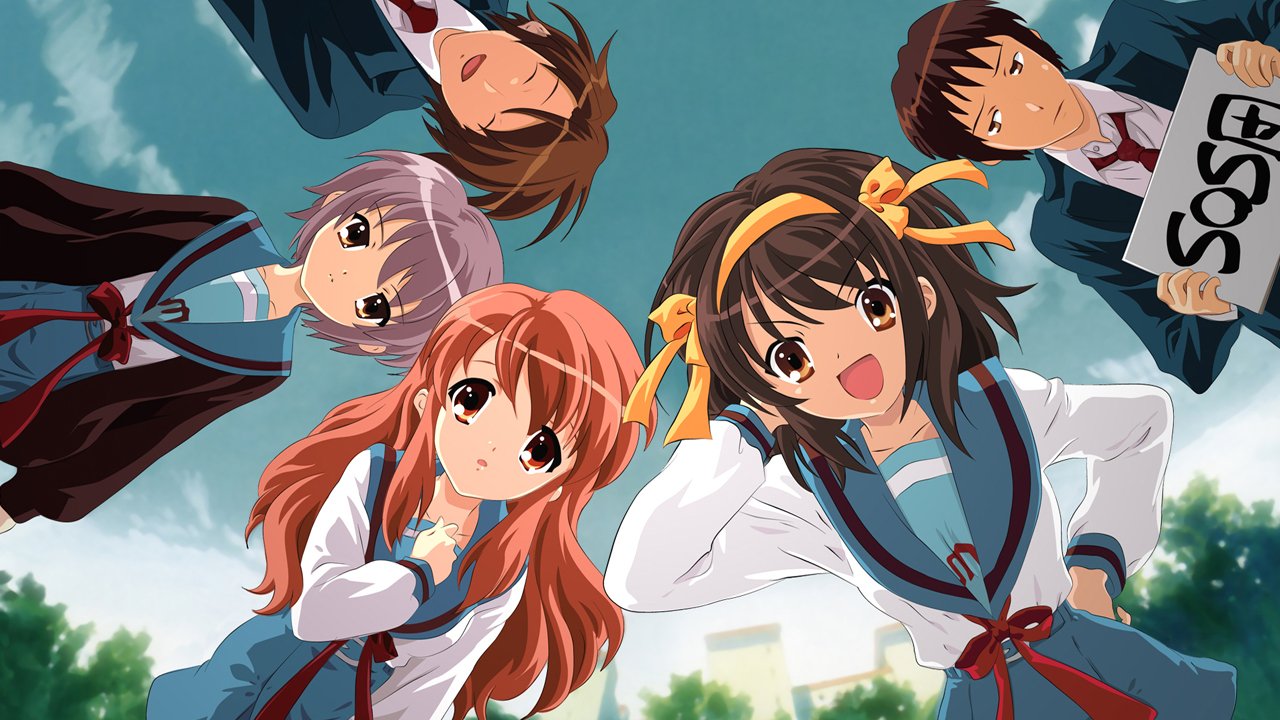 The only religion I’ve ever had on my personal Facebook page is Haruhiism.

It’s a bit of a joke that dates back ten years. When The Melancholy of Haruhi Suzumiya blew up in 2006, it blew up in a big way. Neon Genesis Evangelion and everything in its wake had left studios trying desperately to imitate its cerebral, contemplative nature, and most of them fell flat on their face. The anime industry and its output was starting to stagnate a bit, fermenting like soy sauce left in the jar too long. That’s when Kyoto Animation, an already-pedigreed studio, came along and smashed the stagnant jar to little bits—to paraphrase a Wei Ming Dariotis essay. Of course, it came as a shock to the anime community as a whole, and quickly attracted a feverish fanbase. The most devoted fans of this show based on a series of hit novels referred to themselves as “Haruhiists.”

I still consider myself a Haruhiist, a decade later. That’s because Haruhi Suzumiya still represents something beautiful to me. It represents a turning point for the anime industry, as well as the birth of an entirely new genre and the striking of a fundamentally humanistic chord that no series since has hit. While legions of bitter, jaded, cynical anime fans point to this series as the point where anime went downhill, I beg to differ. Instead, I see The Melancholy of Haruhi Suzumiya as another Evangelion situation. This hit in such a major way that everyone else wanted to recapture lightning in a bottle, and they just couldn’t. That translated to half a billion garbage-tier slice-of-life shows, which even Kyoto ended up churning out eventually. The only good anime produced since has gone in new directions, and all the imitators rightfully fall to wayside.

But what is Haruhi Suzumiya, even? Surprisingly, a lot of newer anime fans haven’t seen it, which is sort of disheartening. At its core, The Melancholy of Haruhi Suzumiya is a show about a normal boy and a girl who’s a goddess. As in, she can accidentally alter the framework of reality itself to suit her whims. It doesn’t help, then, that’s she’s a deeply temperamental and hotheaded person, totally lost in her own world. That world is one where she wants to meet and hang out with aliens, time-travelers and ESPers. Why? Because she’s “not interested in ordinary people.” It’s as simple as that. Before the viewer knows it, the cast is rounded out by those very things. This leaves Kyon, the boy, to act as a go-between for those characters and the goddess in question, Haruhi.

This ingenious framework gives the show a great deal of creative flexibility, which it makes great usage of. Few shows in the past decade have gotten within striking distance of Haruhi Suzumiya’s breadth of depth and character, and I feel that’s due to none of them having the cop-out plot device this one has. “Goddess unwittingly wills things into existence” is kind of a novel catch-all, and it’s stretched to its fullest. There’s a legitimately great murder mystery story arc, complete with a cliffhanger and Ace Attorney references. The gang learns to play instruments with expert precision, gets into simulated spaceship battles, and plays a reality-breaking game of baseball. Most infamously, one episode gets repeated eight whole times, with slight variations between them, simulating the monotony and boredom that comes with infinite repetition while still keeping things compelling.

These are just a few of the ways in which “goddess changes the course of reality” gets pulled out to explain jarring shifts, and it works because it’s held together by the glue that is the cast. Kyon and the other three supporting cast members are fully aware of their situation, constantly commenting on it and poking at the situation. Instead of telling the viewer “that’s just the way it is,” we’re given a window into the perspective of characters. This is the ace in the hole that makes the whole thing work. Other slice-of-life series, in which characters do random, episodic things, fall flat because we’re never supposed to question it. But with Haruhi Suzumiya, we’re invited to do so. We’re invited to point at the ridiculousness of everything, with a wink and nod that’s executed in an intelligent, very meta sort of way.
However, genre-bending hijinks aren’t the only order of the day. The whole series is underscored by a melancholic rumination on the human condition. Through Kyon, we see a cynical perspective on the nature of existence. He questions his own function and value as a human being, and reflects on the very nature of growing older and the latent jadedness that comes with that. Aside from Kyon, though, some episodes are genuine low-key affairs, punctuated entirely by character dialogue and ambient shots of scenery. These episodes, “Some Day In The Rain” being a particular highlight, give the characters space to grow beyond their established tropes. In the face of action sequences, comedic hijinks, and would-be romance, these episodes add a crucial component to the show that ties it all together.

So, yes, all this time later, The Melancholy of Haruhi Suzumiya is still in a league of its own. But is it worth repurchasing? As somebody who bought every Bandai release of the show, and still owns his original DVDs, I’d have to say yes. Funimation’s reissue is done with love and care, especially the handsomely packaged Ultimate Collector’s Edition. The video and audio are both stellar, featuring reanimated intros and outros courtesy of Kyoto Animation. As far as the actual show goes, it’s as good as it’s ever going to get. Some people take issue with QTEC upscales, but I genuinely think this is the best The Melancholy of Haruhi Suzumiya has ever looked, and this is coming from someone who’s seen it five or so times. On top of everything else, the set is packed full of bonus videos and featurettes that are worth it for any dedicated fan. No love is lost between me and Funimation’s releases, but this is one of their very best.

The Melancholy of Haruhi Suzumiya remains many things. Comedy, drama, sci-fi, romance… the list goes on. But ultimately, it defies most classification and transcends genres to deliver a thrilling, poignant and unforgettable series that is the very definition of “masterpiece.” While ultimately a stronger package when paired with its indescribably beautiful companion film, the core series is still a tour-de-force in its own right. It’s something that any self-respecting anime fan should see at least once, and something that shaped who I am as a person, both as a creator and as a human being.

A decade later, few things have gotten close to The Melancholy of Haruhi Suzumiya in terms of quality. But nothing, absolutely nothing, has yet come close to redefining the very medium of television anime since. I’m not holding my breath that it’ll happen soon, either.

Until that day, consider me a devoted Haruhiist.

The Melancholy of Haruhi Suzumiya is still a definitive landmark for Japanese animation, and Funimation’s stellar re-release is a worthwhile purchase for both newcomers and fans alike. 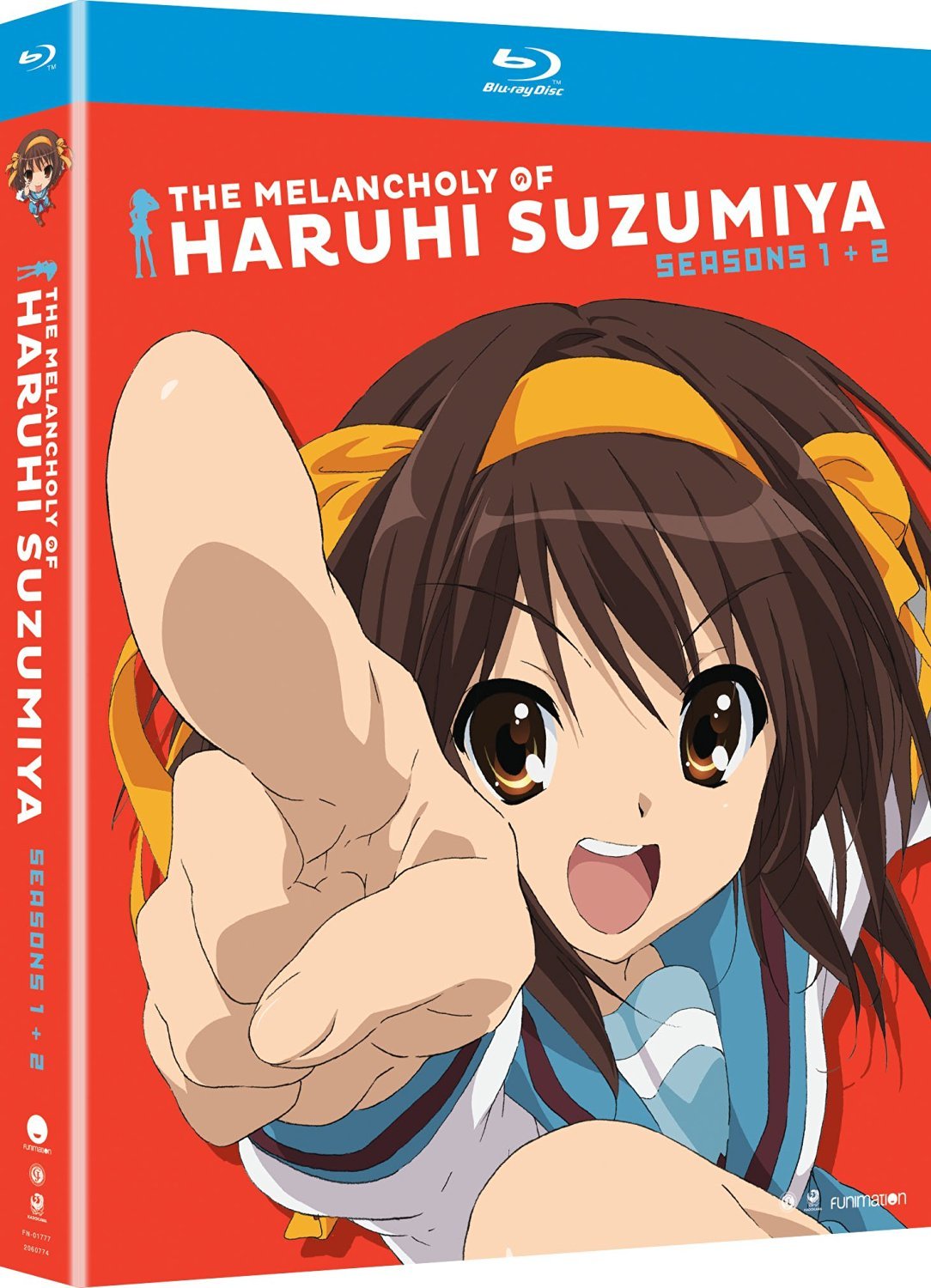