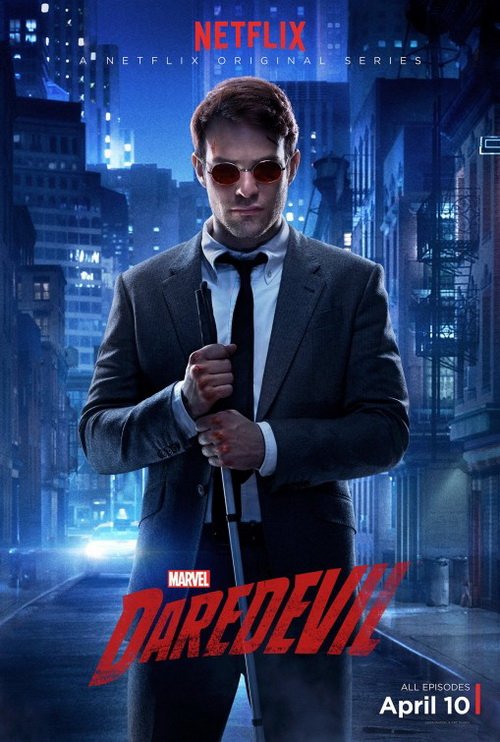 Given Marvel’s track record, if there was a serious question about the new Netflix Daredevil series it was whether or not “grim and gritty” would work in the established Marvel Cinematic Universe (MCU).  It does.  This is an MCU with dirt under its nails and a bottle of booze hidden in a desk drawer behind a mess of sleazy secrets.  This squalid patch of the MCU seems far removed from magic hammers, alien invaders, and sentient robots; even if Steve Rogers could ride his Harley over to Hell’s Kitchen from Avengers Tower.
Miller’s Daredevil tenure is remembered for both his writing and artwork.  His stories reinvented Daredevil, and mixed influences from pulp fiction, film noir, and Japanese samurai manga.  This series happily uses those iconic elements for the plot, but unlike other films based on Miller’s comics, such as Sin City or 300, it avoids imitating his unique visual style.

Instead, the producers imitated Miller’s eclectic approach to influences, and found their own visual models.  Certain scenes recall familiar crime dramas such as The Godfather, The Sopranos,  Breaking Bad or the Coen Brothers films.  A particularly brutal hallway fight in Episode 2 is an homage to the Korean thriller Oldboy and was shot in a long, continuous take.  This approach allows Daredevil to anchor itself in the best of its comic book roots, while pushing it forward into the new medium of streaming television.

Crime drama hinges on characters, and Daredevil delivers here.  The conflicted Daredevil/Matt Murdock is played by Charlie Cox with an eerie calm and physical presence.  Elden Henson as Foggy Nelson, Murdock’s law partner, provides laughs and a conscientious perspective on the hero’s often morally dubious actions.  Both men prove they are heroes in different ways; yes, lawyers as heroes.  How refreshing!

Vincent D’Onofrio plays Wilson Fisk, better known to comic fans as Kingpin, as a ruthless man-child who struggles to fully embrace his villainy.  Fisk’s arc is very daring writing, and asks the viewers to sympathize with him as he falls in love for the first time, even as he crushes skulls and throws rivals down elevator shafts.  Despite his rages, Fisk believes he’s doing right by the city — maybe breaking a few eggs to make his omelet —  and it isn’t until he is backed in a corner that he recognizes his true role as the embodiment of, as he says , “ill intent.”
While there is plenty of angsty soul-searching, let’s be honest: this is a show about a blind Irish Catholic ninja lawyer — how are the fights?  Here, Daredevil really shines.  The short lead time in traditional, broadcast television is generally not conducive to filming complex fight scenes.  The Netflix format allowed much better prep and planning during production which resulted in more detailed fights.

Instead of the jerky, handheld camerawork that’s been popular for fight scenes recently, the series mostly opts for wider shots which allow the audience to see the whole fight.  While this kind of visual space was the norm for old school Hong Kong movies, we don’t get the graceful ballet of Kung Fu but the brutality of truly no-holds-barred street fighting.  Each strike and blow has a consequence and the physical toll on Daredevil is part of the story.

Marvel is using Daredevil to break ground on a new corner of the MCU to feature their “street-level” heroes who aren’t thwarting world domination every week.  There’s plenty left for Daredevil and the other heroes to do.  The Daredevil characters are changed by this experience.  Some seek healing, others seek revenge.  Some shady characters remain at large and pursue their own schemes.  If you read comics, you can probably guess the Night Nurse who patches up Daredevil may appear in the upcoming Luke Cage series.  The head of the Chinese Tong drops hints that may entangle her with the Kung Fu fighting hero, Iron Fist.  We only scratch the surface of the Japanese Yakuza’s mysterious agenda.  There is a fleeting reference to a “Greek girl” in Daredevil’s past that is unquestionably meant to be fan favorite, Elektra, a ninja assassin.  These aren’t dangling threads, they are promises to fans.

This is the perfect start to the Marvel/Netflix partnership and I can’t wait for more!