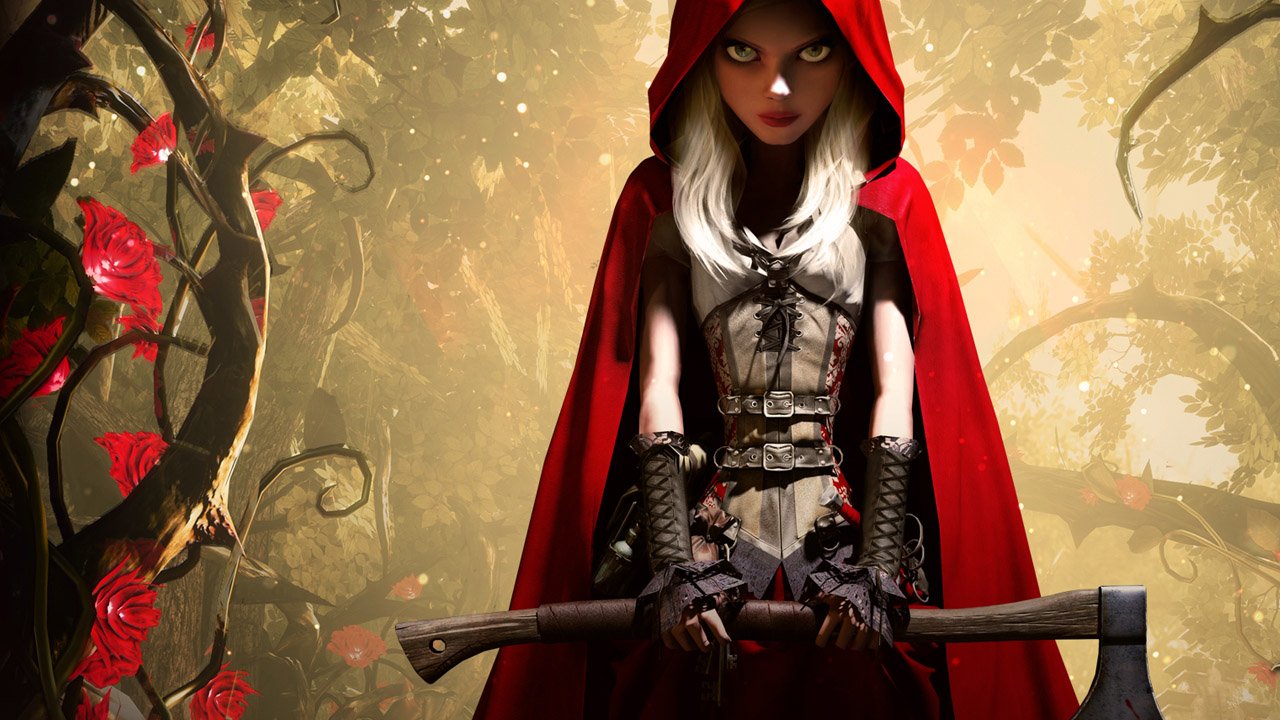 I beat American McGee’s Alice in a nine-hour marathon when I was still in university, my response to post-exam exhaustion. I remember ending my experience bewildered and depressed by the game brevity, though in retrospect, that isn’t entirely too short for an action platformer. The charming art-style and the twist on Lewis Carroll’s world was enough, and I probably would have become bored with the gameplay should it have been longer.

This game reminds me of Alice, both in the almost aped style, and in being too short. Sadly, the brief experience isn’t quite up to snuff. The main character looks almost identical to McGee’s protagonst, save with white hair (for reasons) and the signature red hood. This isn’t necessarily a bad tribute, but it exacerbates the already problematic game structure and design.
The story, told in journal entries and narration, is but a bare premise to take faerie tails and give them roughly the same treatment as American McGee gave Carroll. Red Riding Hood comes to the Victorian steampunk city of Ulrica, patrolled by clockwork soldiers, searching for information on her father’s death. The plot doesn’t have much substance, and I feel like they put both too much and too little effort into the game’s story. The exposition monologues by Red are tedious, exacerbated by the utter lack of voice acting or even speaking by anyone but her and one other. None of diary entries provided anything substantial in terms of lore – nothing that really gave any insight on the main game’s plot, as small as it is. The worst for me was the periodic rhyming that Red tended to break out during some scenes, which wasn’t a consistent feature like in Child of Light, but rather a periodic distraction that occurred too frequently to be coincidence.

It should be noted that this game is clearly meant to be the first in a series of chapters, or at least I assume must be given the abrupt ending. Still, the game’s pacing moves so fast that it seems to skip over critical information, with sudden revelations bouncing everywhere. The game leaped from exploring the city to find your father’s killer to rushing home in what seemed like (and was actually quite close to) only three hours. That journey was not particularly fun, either.

The cartoon, dark-yet-fantastical environments look alright on their own. Rotting boxes, fetid sewers, and strange floating forests abound. I would have liked them far better were it not for the overly restrictive level geometry creating invisible walls to curtail movement. I was often unable to leap over a waist-high railing to another platform below, floating helplessly in the air. I do commend the game for some of its platforming, particularly in the forest section – some of the sequences were clever and made good use of the controls. The constant and distracting screen-tearing regardless of resolution didn’t help matters one bit.

The issue in the end is that the experience feels rushed, yet not worth lingering upon in the first place. Combat is fairly basic, with a magic system amounting to giving high-powered special moves to clear out groups of foes. There’s roughly one enemy type per stage, and all of them employ the same ‘rush in and attack’ structure. A few of the electrified toy soldiers are nearly impossible to beat on Normal and must be avoided, which is about as clever as it gets. Fortunately, death merely returns you to your last checkpoint basket, making it a minor inconvenience of going through the same enemies once again. The handful of bosses breaks it up somewhat, but dying at any point in the fight makes you redo the entire conflict, which often amounts to outright waiting for the boss to become vulnerable to your damage. In the end, I never really enjoyed the challenge of combat, the first time, or the fifth in some cases.
Even for ten dollars, this is a sparse package, and lacks the polish and substance I expect from a finished product. I’m okay with forgiving Kickstarted games for some flaws, especially ones in early access, but this one came out of that stage and into full release, and bore many of the flaws I’d expect from a pre-alpha game. It does not make me want to spent another ten dollars for the next chapter, nor any other that continues after the empty cliffhanger ending.

Even for ten dollars, this is a sparse package, and lacks the polish and substance I expect from a finished product.

File Under: Child of Light, Crowdfunding