Preview: Gears of War 4’s Horde Mode Made Me A Chainsaw Convert 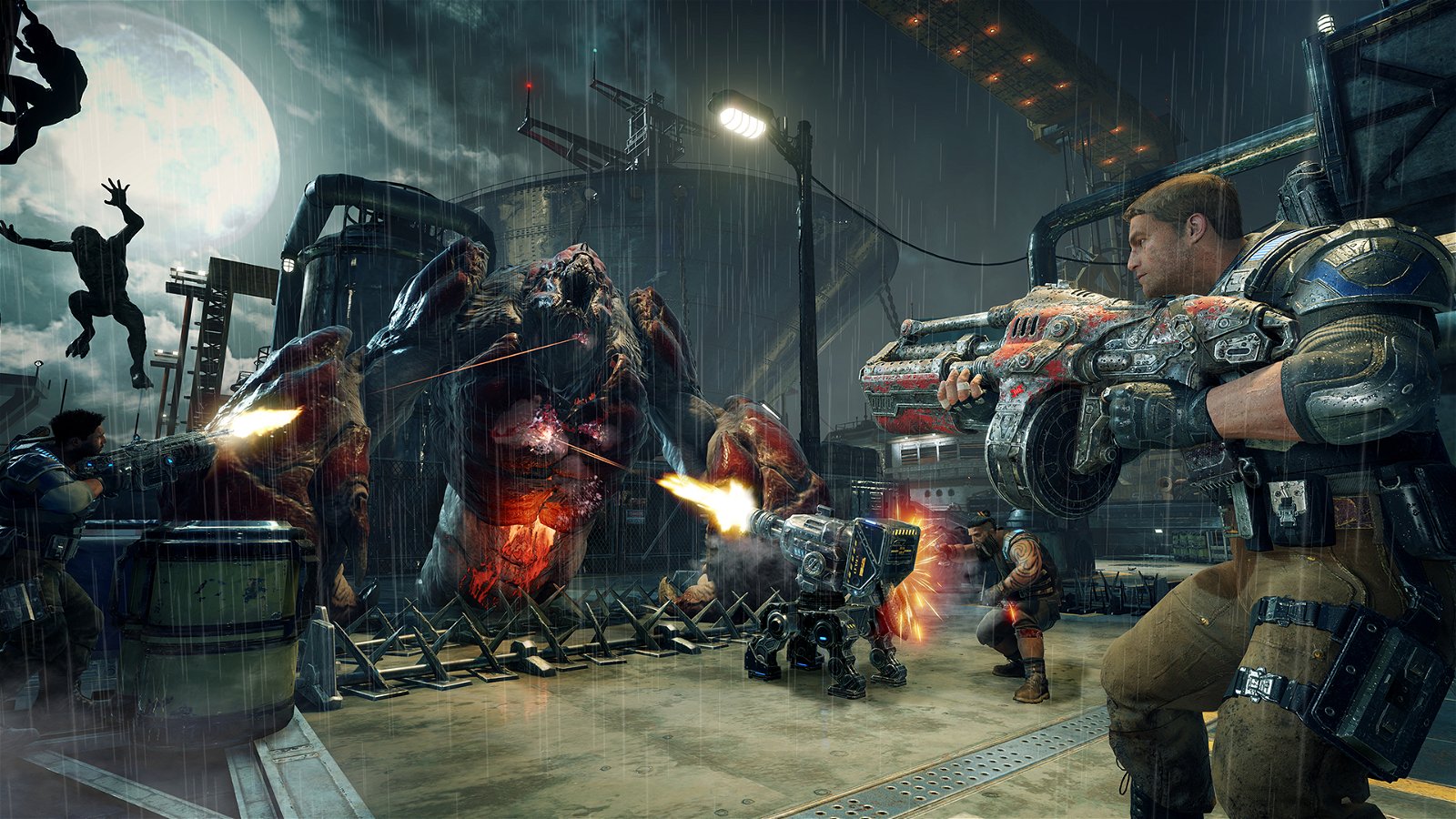 Ever since picking up the original way back when, I’ve tried my hand at the series several times throughout the years. Each time, something didn’t click with me, ranging from the art style to the gameplay to the bro-down of a narrative. Honestly, I didn’t expect Gears of War 4 to be much different. However, having spent time with the Horde Mode at GameStop Expo, I’ve been tempted to go back and give the series a second shot to catch up. Because if the rest of the game is as frantic, punishing, and all-around fun, The Coalition may very well win me over and make me a series convert.

After the long wait (this was clearly one of the hottest games at the convention,) I was thrown into Horde mode with a group of strangers as a developer gauged our series experience through a mic. Immediately, I realized that I was playing with a bunch of franchise veterans, and got nervous. Something about classic Gears gameplay had always confused me, and I was worried that I’d be the obvious sore thumb of the group.

That worry subsided somewhat, though, on the loadout screen. It was very easy to navigate and comprehend, as somebody intimately familiar with similar mechanics in the Call of Duty franchise. Players pick their class, weapons, and skins in a pretty straightforward sort of way.  What I was told is a new addition, however, are skill cards. These give you certain perks that fit your class, so whether you do offense, defense, or something in between, there’s something there for you. I went with my bread-and-butter, a standard assault class (called Soldier here,) and braced myself to let down the entire team.

After loading into the map, which was comprised of a series of rundown farmhouses, the developer instructed us to pick a device called the Fabricator and place it somewhere. My squad found a nice, secluded place for it behind some cover and proceeded to set it up. We positioned ourselves behind cover and braced for the oncoming rush of enemies.

When the initial swarm of enemies hit, I realized that Gears of War 4 was what I’d been waiting for. Despite my unlucky past with the series, I know my way around most shooters, and what immediately struck me was how familiar and tight the gameplay was. Before I knew it, I was darting between cover and pulling off headshots like a pro, in a way that I’d never accomplished in any game prior. Playing the front lines, I was able to keep the first few waves of enemies at bay with relative ease with the Lancer, Gnasher and Snub that I spawned with. Along the way, I swapped weapons with ones dropped by the opposition, as any class can equip any weapon.

Between each wave, my team scrounged for Power from fallen enemies, which we then took the Fabricator. The Fabricator is a military-grade 3D printer, for all intents and purposes, and powering it up allows you to print out increasingly good loot to fortify your defenses. Our primary defenses ended up consisting of a few turrets and spike traps on all sides, ensuring that nobody was getting in without a fight. We also printed out some decoys from time to time, which diverts enemy fire from your actual team for a limited time. The Fabricator was a pretty novel thing, as it tied the whole experience together and made a well-worn mode feel more urgent than, “fight a bunch of dudes until you win.”

After nine rounds, we hit a boss wave. The dev working the booth told us that each boss was random, so you never knew what you were going to get. Considering the last few waves had thrown armored giants, canine-like zombies, and massive drones at us, I was understandably nervous. Rightfully so, as it turned out, as our opponent was a giant insect right out of Earth Defense Force. The thing immediately rushed us, and before too long, I found myself swallowed up in the thing’s stomach, unable to move. As the camera panned around the ant-spider-thing, I gritted my teeth and prepared for imminent death. Luckily, my squadmates teamed up and shot me out of the belly of the beast. Before too long, we were able to neutralize it and pick off any remaining stray targets.

The demo cut us off there, but I came back to the booth at other points during the day, as my first taste left me wanting more. Each time, it stayed consistently entertaining and helped me get more and more acquainted with the ins and outs of the mechanics. After my final farewell to the game, the only thing I was left wanting was more time with the complete package.

Because after all these years, I’ve finally found a Gears that grabbed me. While the jury’s still out on the narrative and other modes, what I played of Horde Mode was enough to merit a purchase alone. It was a terse, tight experience, built on good communication and smart use of both cover and defense. Almost every shooter has some sort of mode in this vein nowadays, but this is the first one in quite some time that feels like a compact, focused experience as opposed to a simplistic kill-a-thon.

Even with just one map and a few handfuls of strangers, I found myself instantly endeared to Gears of War 4. I plan on finally finishing up the original trilogy, as I’ve been told Judgement is more than skip-worthy, before diving into the game on October 11.