This week, the best comics to buy list features a new Venom series, the start of Justice League: No Justice, and the trade paperback My Boyfriend is a Bear. 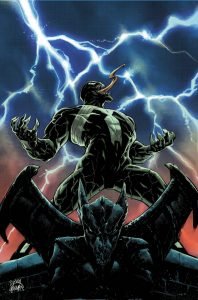 The Venom comic series, like most series at Marvel, has been relaunched a number of times in the past couple of years. It’s a little infuriating as a reader to have to go through so many renumberings and it’s easy to leave a series behind altogether. That being said, I urge you to check out this week’s Venom #1 for two very good reasons: writer Donny Cates and artist Ryan Stegman.

Stegman has had a number of runs on Spider-Man and it’s exciting to see him making the jump to his adversary, Venom. His art style is a perfect fit for Venom’s various hijinx and this will no doubt be a pretty book. As for Cates, ever since he broke onto the scene with his stunning God Country mini-series he has risen to the upper echelon of creators working in comics today. As for the actual issue, the story picks up directly after S.H.I.E.L.D’s collapse and teases an evil entity that will change Venom as we know it. While Eddie Brock is the current host of the Venom symbiote, the solicits tease that that may not be the case once this arc is over. Suffice it to say, if you’re a Venom fan or someone who enjoys superhero comics, then this book is worth picking up. 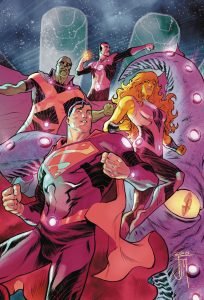 Last week’s 25-cent DC Comics teaser issue featured three stories, but the prelude to Justice League: No Justice was easily the standout. The story featured four different Justice League teams, made up of heroes and villains from around the DC Universe and had a palpable feeling of epicness to it.

This week’s Justice League: No Justice #1 not only features a team-up between the Justice League and villains such as Harley Quinn and Lex Luthor, but is built around the premise of Brainiac asking the league for help. The fact that Brainiac, a being who is very much one of the Justice League’s most formidable foes, is trying to team up with Earth’s defenders is intriguing, to say the least. Not only does this issue features some great writers in Scott Snyder, James Tynion IV, and Joshua Williamson, but it also features the return of superstar artist Francis Manapul. This is an event that already feels significant and a first issue that you won’t want to miss.

My Boyfriend is a Bear

Are you tired of dating the same boring people who, no matter how hard they try, still aren’t bears? Worry not, for this week’s Oni Press release, My Boyfriend Is A Bear, is probably the book for you. The graphic novel is written by Pamela Ribon with art by Cat Farris and focuses on Nora, a woman who has bad luck with men. Then one day she stumbles upon a bear in the Los Angeles hills who ends up being the most romantic partner she has ever had, and the two begin a relationship.

This book promises to be lots of fun and Cat Farris’ cartoony art style is very much a perfect fit for the story being told. While the concept may seem comical and a little out there, this comic also takes a look at the concept of being accepted by your family for who you are, and who you love. It’s also unlike any book on the stands right now and more than worth a look, bear lover or not. 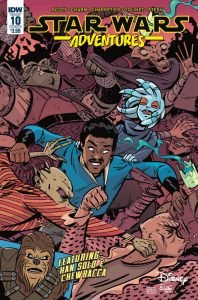 This month’s Star Wars Adventures issue features a story involving young Lando as well as the start of a two-part adventure featuring Han and Chewie. This issue is very much one of the first looks at the Han and Lando from the upcoming film and it will be interesting to see how their characterization differs from the original trilogy.

This issue is, once again, written by Sholly Fisch, who has been on the series since issue #6. In his short time with the series, Fisch has been able to give it a great sense of fun and a distinct voice that sets it apart from Marvel’s Star Wars comics. With Sonic artist Jamal Peppers on art, this issue will no doubt feature some great comedy and is the perfect way to tide yourself over until Solo: A Star Wars Story‘s release. 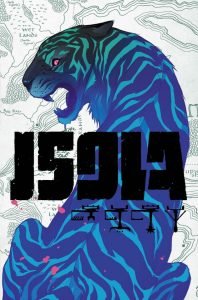 The comics industry is one that often over-celebrates writers and artists, leaving colourists and letterers very much in the background.  While Isola #1 featured some solid writing and art, it is the colouring by Msassyk that made it a memorable one. Isola tells the story of a Queen turned into a tiger and follows her adventures with the Captain of her Royal Guard, who is tasked with keeping her safe. The first issue featured a lack of text and some drop-dead gorgeous art and so far this series feels like a cross between the film Life of Pi and a Studi Ghibli project.

Is your boyfriend a bear? And what books are you most excited for this week? Let us know in the comments below!

Liked this article and want to read more like it? Check out Alex Handziuk’s interviews with Splatoon writer Ian Flynn and Overwatch Voice Actress Lucy Pohl.