This week the Best Comics to Buy list features the milestone 600th issue of Invincible Iron Man, a new issue of the critically acclaimed book Deadly Class, and the 50th issue of Lumberjanes. 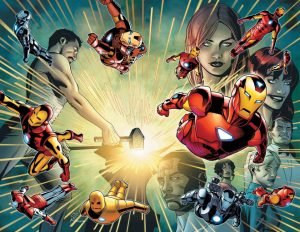 There’s something about large round numbers that appeals to comic book fans, and Invincible Iron Man #600 certainly has that going for it. However, unlike some other recent anniversary issues, this one is actually rather significant, as it’s also Brian Michael Bendis’ final story for Marvel Comics. Bendis broke onto the scene back in 2000 with Ultimates #1 and has since worked on almost every major Marvel character. Along the way, he has become one of the most well-loved/hated creators in all of comics, and his departure for DC Comics is a monumental one.

As for the actual issue, Invincible Iron Man #600 features the return of Tony Stark as well as a number of surprises for new and old fans alike. This issue will also introduce a new villain and set up the futures for Tony, Riri Williams and Victor Von Doom, and it very much seems like Bendis is leaving the door open for the next Iron Man creative team. This issue also features a bevy of top comic artists in Jim Cheung, David Marquez, Mike Deodato Jr., Mark Bagley, Leinil Francis Yu and Daniel Acuña which guarantees that it will at least be a very pretty read. 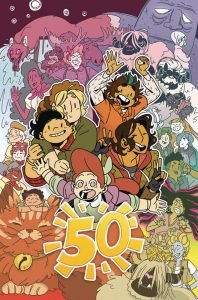 Lumberjanes is a rarity in today’s comic book marketplace as it’s an all-ages title that has had a lengthy, unbroken run. The reason being is that Lumberjanes is an extremely charming and fun book that is full of good-natured adventures and pure-joy. Issue #50 promises some gross discoveries and a chill game of total world conquest, which feels like a very accurate portrayal of the series as a whole. The world could always use a little more joy, and on that same thought, you could very well use issue #50 of Lumberjanes in your life. 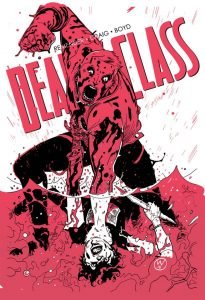 Ever since issue #2 of Deadly Class, fans have been waiting to see the showdown between the book’s (sorta)protagonist Marcus and his Russian adversary Victor. While the two have previously butted heads, with Marcus even attempting to kill Victor a while back, issue #34 is the real deal and could very well feature the death of one of these characters.

Overall, Deadly Class has created an extremely rich canvas of storytelling throughout its 33-issue run thus far. It has explored topics such as friendship, death, loss, drug addiction, betrayal, circumstantial morality, and above all, trying to find one’s place in the world. On top of the great writing, it’s been one of the best-looking books out there, and Wes Craig has very much created a vibrant world that is worth exploring. Craig also confirmed a couple of weeks ago at the Toronto Comic Arts Festival that Deadly Class isn’t ending anytime soon, and now is a great time to jump right into the series. 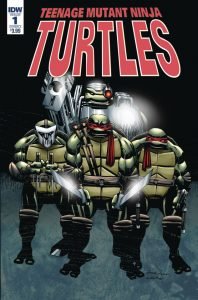 Back before the turtles were bopping heads over at IDW, they had a 23-issue run over at Image Comics. The problem was that the run ended unresolved and for a while, it didn’t seem like readers would ever get an ending. Thankfully, the time for resolution is finally at hand in the form of Teenage Mutant Ninja Turtles: Urban Legends #1. Not only is this series a coloured re-printing of that original run, but it will also feature three new issues that will tie up the story. If you’re a Ninja-Turtles fan, or someone looking to get into the characters, then this issue is one you won’t want to miss.

First, a caveat: The Black Panther series has relaunched a number of times in the past couple of years and frankly it needs to stop doing so. While the series has featured top storytelling, the constant restarts have hurt the character’s progression and stymied the stories’ momentum. However, this week’s Black Panther #1 has an exciting premise, and if Marvel can simply let this series flow, and not re-set it in a years time, then this could very well be the start of something great.

Black Panther #1 not only takes T’Challa out of Wakanda, but out of earth entirely, which is a nice change for the character. The reason for this change is the discovery of a Wakandan empire, located across the multiverse. Black Panther has very much been a character tied to earth and the protection of his people, and so the idea of seeing him in a more sci-fi based adventure is intriguing, to say the least. Writer Ta-Nahisi Coates is simply a fantastic storyteller and no doubt has the chops to make this change, while also keeping the core of what makes Black Panther great.

Liked this article and want to read more like it? Check out our Interview with Archie Comics writer Ian Flynn and Industry Veteran Howard Chaykin.