Rethinking the Co-op Shooter With GTFO 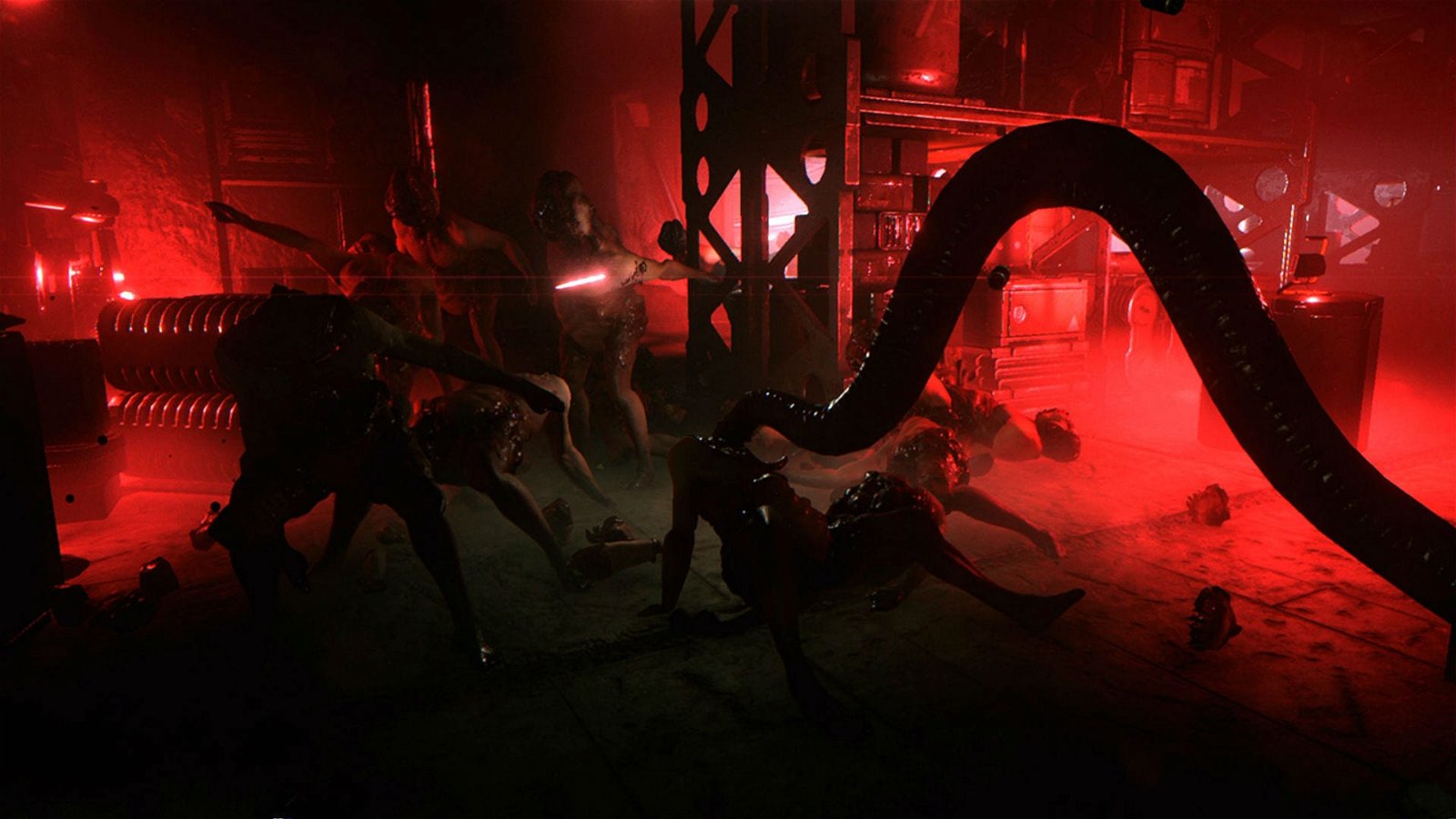 The co-op horror shooter has definitely been a bit of an underserved genre—or at the very least, one that has been mildly forgotten. Back in 2008, Left 4 Dead took the world by storm, and its sequel was hot on its heels only a year later. It’s certainly an interesting formula for a co-op based game—pitting a team of survivors with only their guns and their wits, against all manner of terrible creatures. Unlike most modern military shooters, where the enemies are other humans with guns; games like Left 4 Dead, Killing Floor, UNLOVED force the player to think a little differently, and prove that having a gun doesn’t always give you the upper hand.

Oddly though, there hasn’t been a lot of development in this genre, apart from the few aforementioned titles. And while recently we have seen games like World War Z and, most recently, Back 4 Blood, proving that gamers are still eager to fight off armies of the undead; those games still mostly deliver experiences similar to ones we’ve seen before.

This is why 10 Chamber’s GTFO—yes, it stands for exactly what you’re thinking—intrigued me when I first saw it. Its creature design and general atmosphere looked so much more intense than what we’ve seen with most games in the genre—Warhammer: Vermintide being maybe one of the notable exceptions. Sadly, as is the case with most interesting indie games, it was something that caught my attention, but due to the lack of a decent gaming PC; I had to put in the vault of cool games I could never play. Fortunately for me however, the fine folks at 10 Chambers were gracious enough to fly me all the way down to the Unity office in San Francisco to try out GTFO, and I’ve got to say, it definitely exceeded my expectations!

While I was there, I had a chance to speak with Co-Founder of 10 Chambers, Oscar J-T Holme and Communications Director Robin Björkell who gave me an understanding of both 10 Chambers—which got its name when it was founded as a collective by only 10 people—and the game itself. GTFO will be 10 Chambers’ first game, and what I was interested in most was the “why.” Why this kind of game, when so many other studios would’ve hedged their bets with a safer project.

“I think it comes down to—if you look at the guys, they wanted to do something that was quite high level, but with a very small group of people. And I think, when we spoke to some publishers in the beginning, they didn’t really like our game idea because it was quite niche. They saw a lot more money making potential if we did it a bit more…vanilla, you could say.

Anderson continued, “But this was a game that all of us wanted to play, and we thought there isn’t really anyone that does this type of game, but if we dare to do it; maybe there’s more people than us who want to play it. And we have sort of been proved correctly!” And he’s definitely right, as GTFO has one of the world’s largest Discord servers, with over 173,000 members, usually averaging well over 60,000 active members daily.

And for good reason too, getting my hands on the game, I can certainly see the appeal. GTFO is an unforgiving game—I know it’s pretty cliché in games media to say something is “the Dark Souls of [insert genre],” but this time I say it without hyperbole: GTFO is the Dark Souls of co-op shooters. One of the main selling features of GTFO is how it’s been built as a co-op shooter with true survival horror elements baked in deep.

“GTFO is the Dark Souls of co-op shooters”

Players begin each round descending into dark, cavernous facilities—evoking feelings of descending into the depths of Hell—and are immediately put at a disadvantage. Health, ammo, and resources are scarce; and the horrors are abundant. This is a true co-op experience and players NEED to coordinate, using a combination of resource management, stealth and precision shooting if they’re going to survive until the end of a round.

I found this genuinely refreshing—as someone who’s logged hundreds of hours into Left 4 Dead, what you notice with a lot of games in the genre is a sense of chaos. Hundreds of enemies all rushing towards you at once; and while that can be pretty nerve racking, in many instances, you can more-or-less just spin in a circle with a machine gun and get out of any situation. GTFO isn’t that kind of game, as Björkell explains, “obviously we love Left 4 Dead and there’s a lot of inspiration from Left 4 Dead, but we’re going for the really true co-op feel. Maybe you noticed this while playing, you really need to cooperate and communicate at all times to succeed in the expedition.”

Some of the other co-op games out there, they’re great and they do their thing; but you can kind He continued, “So with GTFO I think what separates us is, that truly doesn’t work—you can’t play with one person who is extremely good at the game while everyone else does nothing; you will not succeed. And that was the idea from the start…like, true co-op, really hardcore co-op.”

Hardcore is definitely the optimal word to describe it, as was my experience playing it. While there are a lot of options for loadouts that best suit your play style, it really is the kind of game where if each player takes a designated role and tool, then the round can be much more effectively approached. Whether you choose a foam-gun that can block doors or stall monsters, a mounted turret, or an Aliens style scanner that can mark moving enemies on-screen, if every player does their job, then they just might survive.

But this is not a guarantee in GTFO. I consider myself a pretty competent player of video games, and even with communication and coordination, at no point did I ever feel safe. This could very well be attributed to the design of the creatures themselves. Art Director Anders Svärd spent several months experimenting with several different monster designs, but as J-T Holme explained, “I think everyone has always been inspired by Ridley Scott—Alien, that kind of stuff, so I’m sure there are a few…spice-notes from there!”

Björkell added to this, saying, “And also, we tried to find something different because the designers didn’t want it to look alienish, they didn’t want it to look like a zombie; so they wanted to find some creature that was in-between because you’ve seen zombies so much in games, right? So they wanted something that was going to be scarier than a zombie.”

“10 Chambers clearly put a lot of effort and love into GTFO, and it was apparent the whole time I played”

And they are incredibly terrifying monsters—pale, eldritch abominations with hanging guts and heads made of rows of terrible teeth. They stand in the dark, and pulsate with internal light once they become agitated. Leaning into the horror elements, they react to sound and light, forcing the players to approach every enemy carefully, or methodically stealth through more dangerous rooms—which was the case for my group when we found ourselves faced with a room where the only way forward was through four behemoth creatures.

While I only saw a few of the more special-type monsters, they were equally terrifying. Between hulking behemoths, scouts that sprout long tendrils throughout a room and will call dozens of enemies to your location if touched; or Cthulhu-esque creatures that fly around, there’s no shortage of horrible imagination within GTFO.

Despite being a truly difficult game, I genuinely had fun playing it, and you can see a lot of the love that has been poured into it. As J-T Holme, and some other members of the team explained, they’ve done a lot of fine-tuning for the 1.0 release from Early Access in order to make it more accessible for new players; but the difficulty is definitely part of the charm.

“I mean, it’s really unforgiving, you have to do a lot of trial-and-error in order to succeed, and because you fail quite a few times, you also get these great kicks when you succeed with the level,” J-T Hole said. “And that’s something that’s fun for us as gamers as well, that when we succeed we get those…I’m not sure what the word for it in English is, but it’s like…water? Water-cooler moment?”

10 Chambers clearly put a lot of effort and love into GTFO, and it was apparent the whole time I played, and it’s incredible given the size of the team that made it. Despite the challenge, the team persevered, as J-T Holme admitted, “A lot of people said it was impossible to build a game—where we explained what we were going to do—with only nine people.” Björkell echoed this sentiment, “And finding that balance between a really challenging game; because that is the type of game that we want to play, but at the same time not being unfairly challenging…but I think we’ve definitely hit that sweet spot now, and it’s working well.”