A Meditation on Difficulty 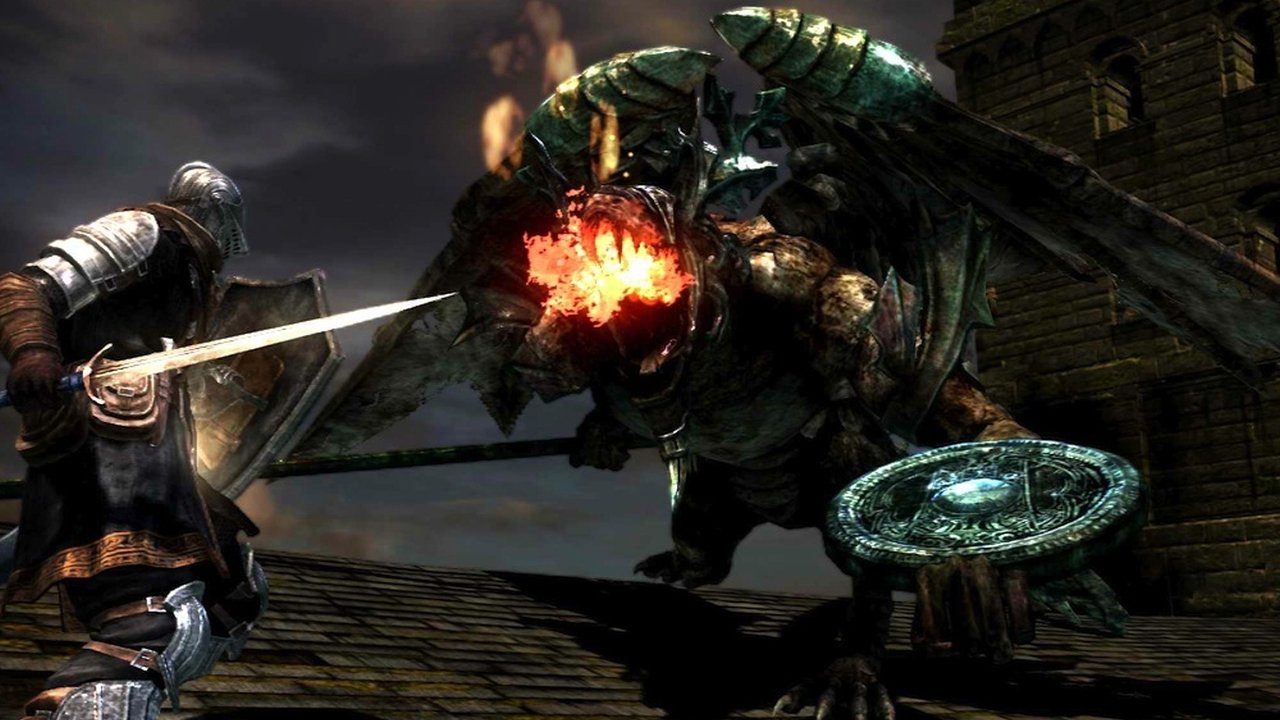 There are few games that fill me with actual dread, even though I enjoy playing them. Demon’s Souls is one of those games; Dark Souls is now another. The reason for the dread is simple: these games belong to a rare class of interactive entertainment that can be fun but at the same time cause an enormous amount of distress. And for some, these games provoke genuine rage.

It’s a tactic that has greatly fallen out of favour with developers in recent years. There are, I think, two major reasons for this. One is that as Western development philosophies have become more dominant, there’s been more focus on satisfying the adolescent power fantasy, of giving players a sense of superiority, the most basic kind of escapism from a mundane life. The other factor, which I think is far more easy to explain, is that designing an elegant, brutal challenge is incredibly time consuming, and far easier to do if you simply leave it in the hands of human opponents in competitive multi-player. After all, why should you spend all that time making something challenging but not impossible, when you can just create a map and let other people on the internet do the same thing for you?

This is where Dark Souls comes along as a surprising dinosaur of gaming design. There was a time, at the infancy of the medium, when it was a niche activity pursued only by dedicated, pioneering hobbyists. As such, difficulty curves for games could be adjusted to take this greater intensity of gaming into account, and it produced all kinds of games that would be considered diabolically hard—or even unfair—by today’s standards. For example, the never-finished Alternate Reality RPG series on early hardware like the Commodore and Atari family of computers gave players just one life, and the ability to die within minutes of starting the game due to the sheer size, complexity and mercilessness of the game system. Hunger, thirst, encumbrance and state of rest were all in play in the game, and it was easy for the new gamers to die simply by not eating, or falling asleep due to exhaustion in the street, only to die in a random encounter when they were woken up.

This is a far cry from the games of today, where the priority of the developer is to make the player feel like a hero. A good contrast in terms of modern titles would be Batman: Arkham City versus Dark Souls. On the one hand, B:AC is about making players feel like Batman; that is, powerful, agile, intelligent and in control of the situation. Dark Souls on the other hand, punishes the player for arrogance, encouraging them to play cautiously, explore carefully and take a considered approach to fights. The “reward” in Dark Souls for doing these things is survival, and a sense of elation from scraping through an insanely difficult obstacle, whereas the reward in Arkham City is to find out what happens next to the Dark Knight. In other words, Dark Souls is about triumphing over odds stacked against you, whereas Arkham City is about feeling like a superhero.

Which one is better? Obviously, in the West, from a pure commercial perspective, fulfilling the power fantasy is what sells with the mainstream audience. Escapism of this sort is always a good alternative because it provides the empowerment that some feel they lack in real life, and for the price of $60 or less they can instantly achieve that sense of security and satisfaction. The other way, the more traditional—and these days some might even say Japanese—way is more measured, demanding form of entertainment. There is a reward, and there is fulfillment, but it only comes with a willingness to expend effort, to learn, and ultimately overcome. The reward comes from actually improving your skill and becoming a better player. Of course, this comes at the cost of time and investment in practicing, which may be asking a lot from a form of entertainment. It’s like the dilemma of giving a man a fish versus teaching him how to fish. One is an immediate, tangible, short-term reward that is temporary in nature. The other—in a virtual way—teaches a skill that can be applied over the course of a gaming life, which is how competitive multi-player works.

It’s a tough call. Having played both games, I can appreciate what they both are trying to do, but I suppose that, being a hardcore gamer at heart, I find myself edging closer to what Dark Souls offers. It’s an accomplishment. A virtual one, to be sure, but it feels like you did something, and to people familiar with the game, it means something when you manage to overcome its many adversities. It’s a testament to From Software that they were able to craft a kind of difficulty in the game that felt impossible, but never truly was, without resorting to a skilled human opponent to do it.